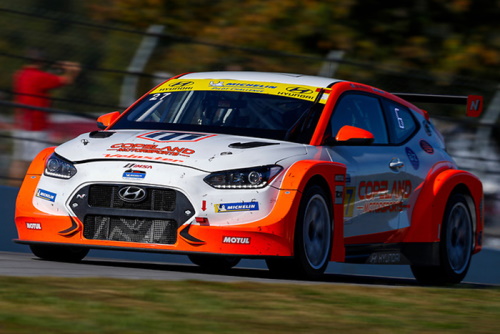 BRASELTON, Ga. (October 20, 2020) – It was nearly a winning debut for Tyler Maxson and Copeland Motorsports as he and co-driver Tyler Gonzalez challenged for the win late in the Fox Factory 120 but were forced to settle for the second step of the podium. Taking place at the famed Road Atlanta, Maxson pushed the Hyundai Veloster N TCR to the limit gaining the lead on the final restart and holding it until the penultimate lap to finish second.

“IMSA is a different type of racing than I am used to, but I like it!” added Maxson. “While we did not end up on the top step of the podium, we sure mounted a good charge. It was awesome to race alongside Tyler Gonzalez, and I think we could make a pretty powerful pair for the future.”

Showing pace through the two official practice sessions, a sixth-place qualifying effort after a red flag in the session was disappointing for the teenage duo.

Looking to overcome their in-class row three starting position, Tyler Gonzalez ran the opening stint and steadily progressed forward. Keeping the car clean and handing the wheel to Maxson for the second half of the race, the just 16-year-old continued where his co-driver had left off and moved into the second position late in the race.

Taking advantage of a late race caution, Maxson powered to the lead with just under five minutes remaining but lost it on the second to last lap. Maintaining pace with the leader, Maxson challenged his fellow Hyundai competitor finishing .099 in arrears and crossing the line in P2. It was an incredible debut for both team and drivers, especially as the youngest driving pair on the grid. 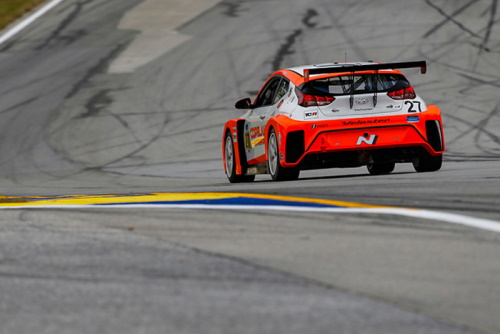 “We came here with the goal of finishing but as a racer, you always want to win,” added Maxson. “I am grateful to have the opportunity to compete and of course finish second, but it makes me that much hungrier to stand atop the podium. Looking forward to trying to climb one step further up the podium in Sebring in mid-November.”

Tyler Maxson would like to thank Copeland Motorsports, Bryan Herta Autosport, Hyundai, HRX USA and Four Seasons Auto Wash for all of their help, support and hard work throughout the 2020 season.

For more information on Tyler Maxson, please contact RTD Media and Management at Info@RaceTechDevelopment.com or visit him online at www.TylerMaxsonRacing.com.