HOUSTON (October 21, 2020) – It wasn’t that long ago that five-time Pro Stock world champion Jeg Coughlin Jr. was in full control of the factory hot rod class. He raced to three finals in the first four races, winning twice, and was more than two rounds ahead of Jason Line and almost four rounds up on his Elite Motorsports teammate Erica Enders. 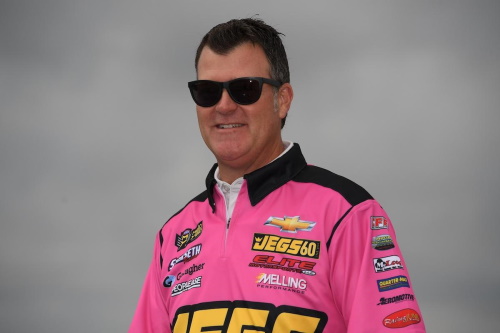 “We need a perfect scorecard from here on out to even have a glimpse of hope,” Coughlin admitted. “Fortunately, we made a lot of progress in Dallas and the final two races left on the schedule both take place at tracks where we have historically done very well so we feel good about finishing strong.

“Erica and Jason are out there a bit but we can’t control what they’re doing so we’ll just get super aggressive and try to earn as many points as possible. If the JEGS.com Elite Motorsports Chevrolet Camaro is the last car left on race day, we’ll know for sure we’ve earned more points than everyone else, so that’s the goal.”

“The victory here in ’97 was my first in Pro Stock so it would be great to finish like we started with another Houston win,” said Coughlin, who will retire from full-time professional competition at year’s end. 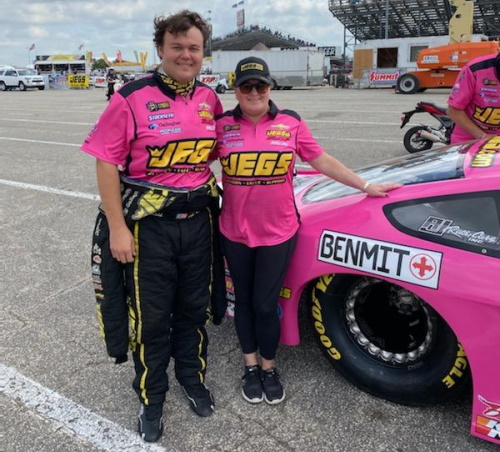 Houston also will be a huge stop for rookie Pro Stock driver Troy Coughlin Jr. as he unveils a special sponsorship with BENMIT, which processes steel pipe for businesses in the oilfield/energy and water delivery sectors. BENMIT has several customers in the Greater Houston Area whom they will be entertaining at the event.

“It’s a real honor to have BENMIT on the racecar,” Troy Jr. said. “I went for a visit to their facility in Ohio this week and it’s great to see American workers making top-notch American products that keep America’s engine running. Houston is the energy capital of the world so it’s natural for BENMIT to have a bunch of happy customers there.

“Probably the coolest part of BENMIT is that it’s a third-generation company, just like we have at JEGS. Jeff and Brian Cunningham, along with their sister Jennifer Woodruff, are doing their family proud. I’m thrilled to bring some attention to their made-in-the-USA steel pipe.”

Troy Jr. will be driving the same JEGS.com/BENMIT Ford Mustang out of the Elite Motorsports camp that he’s raced for most of the season, including during a career-best final-round appearance at the third Indy race, where he lost to his uncle Jeg Jr.

“Being a part of Elite Motorsports gives BENMIT a great chance to experience the top level of NHRA drag racing and it would be awesome to get them a win,” Troy Jr. said. “With guys like Rick Jones, Mike DePalma, Eric Luzinski and Robert Freeman behind me, I feel fully prepared for a big weekend.”

But with only 10 races on the COVID-shortened 2020 NHRA schedule, slip-ups can reverse one’s fortunes in short order, as Coughlin discovered after two unlikely first-round exits, which helped flip the table in the standings. He now trails Enders by four and a half rounds and Line by three.