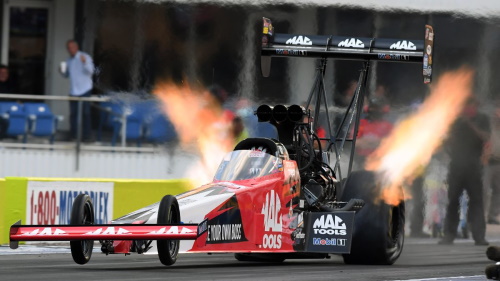 From the beginning of the season when Doug Kalitta and the Mac Tools team started off with a win at the Winternationals the team knew it would come down to the last few races to determine the championship. Kalitta and his team have led the points the majority of the season and entering the NHRA Spring Nationals at Houston Raceway Park they are right in the championship mix. They sit just 51 points out of first place with a win and a semifinal finish over the past two races. This differential can easily be made up with a strong performance weekend in Houston.

“We have two races left and we know what we need to do,” said Kalitta. “The good news is we basically control our own destiny. If we run well in qualifying and win these last two races we should be the champions. It will be tough but I have a great team behind me and I have a lot of confidence.”

“We won a lot of races in the first part of the year at the Spring Nationals so we will see if we can win one in October,” said Kalitta. “I am glad we are getting to race in Houston because we have a lot of representatives from Mobil 1 who will be at the race and our new sponsor Osborn has some strong Texas ties. I was actually supposed to unveil an Osborn Top Fuel dragster at this race earlier this season. They are featured on my Mac Tools dragster pretty big this weekend.”

Kalitta’s wins at the Spring Nationals were tallied in 2016, 2015 and 2003. In addition he recorded two No. 1 qualifiers in 2013 and 2002. Strong performance numbers would be a huge advantage this weekend as Kalitta chases down his first Top Fuel world championship. This season has seen him race to four finals and pick up three wins most recently at the NHRA Midwest Nationals in St. Louis. The veteran driver has only qualified in the bottom half of the field one time in the previous nine races.

“With only one day of qualifying you really have to make your two passes count. It makes it tough for the crew chiefs for sure but Rob Flynn and my Mac Tools guys have been amazing all season. We want to get some of those qualifying bonus points and then get a lot of round wins on Sunday. That will be the key to our success for sure,” added Kalitta.

Quotable: Doug Kalitta on Top Fuel championship battle: “We have been here before so I don’t feel any extra pressure. We just need to focus on what we can control. If we do that then no matter what happens we will know we gave it our best. These next two races will be a lot so fun and I am looking forward to the challenge.” 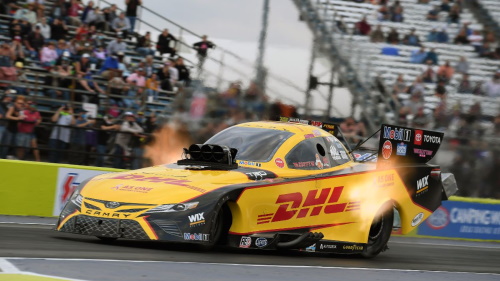 This weekend’s NHRA Spring Nationals sees the return of J.R. Todd to a track where he has done something only two other racers in Houston Raceway Park history have accomplished. Todd along with Mike Dunn and Del Worsham are the only three racers to have won the Spring Nationals in both Top Fuel and Funny Car. In a matter of days Todd and his DHL Toyota Camry Funny Car will be looking to add a second Funny Car title to his trophy case and also continue to climb the NHRA Camping World Funny Car standings with two races remaining in the season.

“It is cool to be able to say you have done something only a couple other racers have done at a track that has as much history as Houston Raceway Park,” said Todd. “Guys like Mike Dunn and Del (Worsham) are Hall of Fame drivers so you want to be on lists with those guys. I really just want to get another win here because we have been grinding all season and we want to get four win lights on Sunday.”

Since 2014 Todd has won at least one NHRA national event and the 2018 Funny Car champion definitely wants to keep that streak alive. The DHL Camry Funny Car has two runner-up finishes including a close race at the U.S. Nationals over Labor Day weekend. As a nine-time Funny Car winner Todd would love to get that tenth win in Houston.

“We came close in back to back weekends racing in Indianapolis,” said Todd. “I really wanted another win at the U.S. Nationals. You get so close those are the tough ones to get over. You have to put it behind you and move on. These last two races are important and we want to get some wins.”

It was two years ago when Todd took his lone Houston Funny Car win over Robert Hight and eleven years before that he was winning in Top Fuel over Joe Hartley. The progression of Todd’s career has not been a straight rise to fame and fortune. In the latest edition of Drag Racing Edge magazine Todd talks about how his career had a number of starts and stops which he feels only makes him a more aware driver.

“I had a lot of people help me along the way. I got a chance to drive for Dexter Tuttle and that put me on the map,” said Todd. “Drivers put in a good word for me along the way and I kept busy as a crew guy doing whatever needed to be done. I can’t thank Connie Kalitta enough for calling me and getting me back in a dragster and then giving me the opportunity to win a Funny Car championship in Scott’s Funny Car. I have been very fortunate.”

Quotable: J.R. Todd on final two races: “I feel really good about these last two races. They are at tracks where I have had success. This DHL Toyota Camry team isn’t about to throw in the towel. This weekend we are going to be aggressive during qualifying and then race smart on Sunday. We’ll take it one run at a time.” 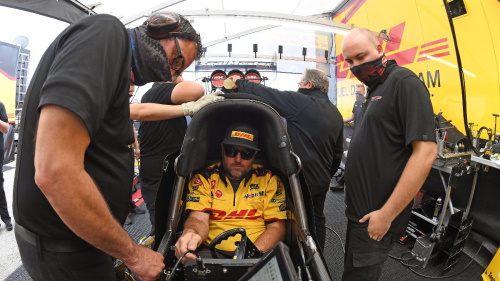 With two races remaining in the 2020 Camping World NHRA Drag Racing Series season Shawn Langdon and the DHL Kalitta Air Top Fuel dragster team are looking for a couple more Top Fuel wins. This weekend at Houston Raceway Park during the rescheduled NHRA Spring Nationals Langdon will be looking to build on momentum from last weekend’s semifinal finish at the Texas Motorplex. The 2013 Top Fuel champion sits in the No. 5 spot in the Camping World Top Fuel point standings with two strong races he could break into the Top Three and also support his teammate Doug Kalitta’s chance for his first championship.

“Our goal every weekend is to end Sunday night holding a Wally and celebrating with this DHL and Kalitta Air Top Fuel team,” said Langdon. “Connie Kalitta is a legend in this sport and he along with Kurt Elliott give me one of the best and quickest race cars on the tour, week in and week out. Last weekend in Dallas we had a strong race car and we raced it to the semis. We want to get all the way to the winner’s circle this weekend in Houston.”

This season his return to Top Fuel after a two year stint in Funny Car has seen Langdon slide smoothly right back to his roots. In 2013 Langdon raced through the Top Fuel field winning multiple races including the U.S. Nationals and Traxxas Shootout on his way to the Top Fuel championship. That season he was runner-up at the Spring Nationals and he is still looking for his first win in the Lone Star State.

“We got to the final a few years ago in Houston and I have been to a couple finals at the Texas Motorplex,” said Langdon. “I would love to get a win in Houston since it is the hometown of Mobil 1 who gives us great support. Toyota is based in Dallas so I am sure there will be some representatives here this weekend. The fans turned out in Dallas so I think we could have a good crowd in Houston too.”

The highlight of the season for Langdon was the Labor Day win at the prestigious U.S. Nationals in Indianapolis. It was his third win at the historic event and a second title in the Top Fuel class. The victory moved him up in points but also gave the veteran driver additional confidence to finish the season strong.

“Winning the U.S. Nationals is always special. It was different this season because it was the fourth time we raced at that track in a row. If you are only going to win there once I am glad it was the U.S. Nationals. We have two more races and that is two more opportunities to win. This class has been really tough this season with a lot of young drivers coming up and other teams really giving it there all. I am glad I am in the mix to be one of the top teams. I have to thank DHL, Mobil 1, Toyota and NGK Spark Plugs plus a lot of other great sponsors for their support,” added Langdon.

Quotable: Shawn Langdon on last two races: “I am looking forward to getting to Houston and then on to Las Vegas. It looks like we will get 11 races in this season and we are finishing strong with some good race tracks and tough racing. We have the chance to get two more wins and I want to take advantage of those opportunities.”