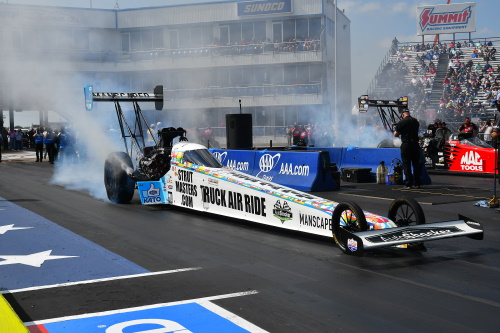 MELVILLE, NY (October 22, 2020) – After a career quickest run at the Texas Motorplex and his best start as a professional Top Fuel pilot rookie of the year front-runner Justin Ashley is eager to head south to Houston for the NHRA Spring Nationals this weekend. During last Saturday’s first qualifying session at the NHRA FallNationals Ashley drove his Strutmasters.com Top Fuel dragster powered by MANSCAPED™ to the top of the class and eventually settled for the No. 2 qualifier going into race day behind Steve Torrence the class point leader.

“Our first qualifying run on Saturday at the Texas Motorplex was amazing,” said Ashley. “It was right on the edge of making it or not making it. I am glad we held it together to get that run in. That shows how far this team has come.”

This weekend Ashley will once again be at a brand new track for the young driver but with support from his teammates and crew chief Aaron Brooks the driver from Melville, New York, is up for the challenge. Over the course of the season Ashley’s rookie team has gelled into a strong unit that gives him a consistent race car every day. In Dallas a gremlin forced the team to do a deep dive the week leading up to the Spring Nationals but Ashley is confident heading to Houston Raceway Park.

“Every team has issues on their race cars that pop up. Aaron and the guys spent days going through this dragster and we feel good about getting to Houston. I am excited to have Truck Air Ride on my dragster for these last two races,” said Ashley. “The support of our marketing partners like Auto Shocker, MANSCAPED, Kato, Lucas Oil, King Engine Bearings, Justice Brothers, Sanit, Guardlab, Hero Soap Company, Menards and Impact have been second to none. Throughout this season we have talked as a team about winning together and losing together. Our team takes every setback as a chance to learn and get stronger.”

Ashley’s on-track performance has been improving and he is also supporting sponsors like Auto Shocker through a number of videos running across a variety of social media platforms explaining the benefits of the odor eliminating product. The additional marketing responsibilities are a welcome diversion for Ashley.

“You see our Top Fuel dragster on the homepage for Strutmasters and we made a couple videos for Auto Shocker earlier this season. Those were a lot of fun and easy to do when you believe in the products as strongly as I do,” added Ashley.

For a rookie driver and a rookie team the 2020 season has been challenging but also a very rewarding experience. Slated to run half of the season in January the revised schedule of 11 races allowed Ashley to contend for the championship and most likely finish at or near the Top Five at the conclusion of the year. It is a sense of accomplishment Ashley and his team could not have anticipated. 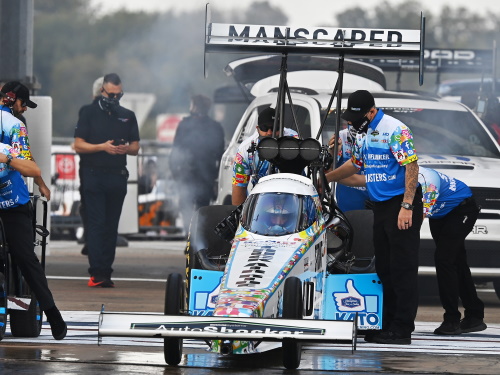 “We wanted to come out in 2020 and run as many races as possible which we thought would be 10-12 over the course of the 24-race season,” explained Ashley. “Then we have the pandemic and everything gets put on hold after two races. Once the new schedule was released we realized we could run all the races and we just got to work. We qualified well and won rounds. The highlight was definitely the weekend of the U.S. Nationals.”

Labor Day weekend saw Ashley win the postponed NHRA SummerNationals final which was contested on Saturday. The next day rookie driver raced to the semifinals at the most prestigious race on the NHRA Camping World Drag Racing Series, the U.S. Nationals, and he participated in one of the most memorable races of the season, a semifinal pedal-fest with eventual race winner Shawn Langdon.

“That semifinal race was wild. You don’t get a chance to practice pedaling an 11,000 horsepower Top Fuel dragster,” said Ashley. “I have had people tell me they will remember that run more than who won the race. I am not sure about that but I will remember that run for a long time. It was a great weekend for this Strutmasters.com team and I have to thank Chip Lofton from Strutmasters and everyone at Davis Motorsports for all their support.”

The Strutmasters.com Top Fuel team will be on track for both qualifying sessions on Saturday and will be looking to turn on four win lights on race day.