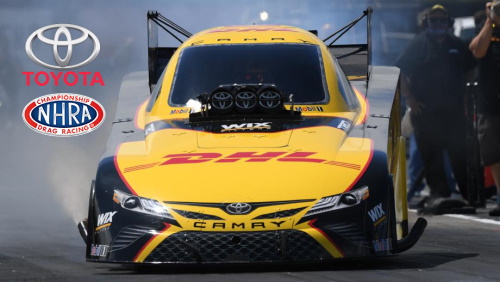 GLENDORA, Calif. (October 23, 2020) – Toyota has extended its agreement to serve as the Official Car of the NHRA. In continuation of its long-standing partnership with NHRA, Toyota will have a season-long presence at NHRA Camping World Drag Racing Series events and will be featured prominently in NHRA’s television broadcasts.

“As NHRA continues to grow, it is an absolute pleasure to have Toyota extend our partnership,” said Brad Gerber, chief development officer for NHRA. “As we continue to push the limits within NHRA drag racing, we will continue to push with Toyota as our partner on and off the race track.”

“Toyota is pleased to be extending our agreement with the NHRA,” said Paul Doleshal, Group Manager, Motorsports and Assets, Toyota Motor North America. “The relationship between NHRA and Toyota has provided a platform to work with our local dealers and regions, as well as being able to promote our Toyota product lineup to a very loyal NHRA fan-base across the nation. We look forward to celebrating our 20th NHRA season next year and plan on continuing to build on that momentum for years to come.”

The partnership between Toyota and NHRA began in 2002. Toyota added the Official Car of the NHRA title beginning with the 2014 season.

About Toyota
Toyota (NYSE:TM) has been a part of the cultural fabric in the U.S. and North America for more than 60 years, and is committed to advancing sustainable, next-generation mobility through our Toyota and Lexus brands. During that time, Toyota has created a tremendous value chain as our teams have contributed to world-class design, engineering, and assembly of more than 40 million cars and trucks in North America, where we have 14 manufacturing plants, 15 including our joint venture in Alabama (10 in the U.S.), and directly employ more than 47,000 people (over 36,000 in the U.S.). Our 1,800 North American dealerships (nearly 1,500 in the U.S.) sold nearly 2.8 million cars and trucks (nearly 2.4 million in the U.S.) in 2019.

Through the Start Your Impossible campaign, Toyota highlights the way it partners with community, civic, academic and governmental organizations to address our society’s most pressing mobility challenges. We believe that when people are free to move, anything is possible. For more information about Toyota, visit www.toyotanewsroom.com.