BAYTOWN, Texas (October 23, 2020) – The KB Racing NHRA Pro Stock team has a sturdy and impressive record of triumph in the incredibly competitive class. Many times, that competition has hit very close to home – including last weekend in Dallas, when Matt Hartford got the nod over Greg Anderson in the 47th final round between KB Racing-powered drivers.

The 2004 final was the first of Line’s Pro Stock career after making his professional debut in Columbus in 2003. After defeating Steve Johns, Dave Connolly, and championship-hopeful Mike Edwards, Line’s huge smile at the top end was unmistakable before he even removed his helmet. 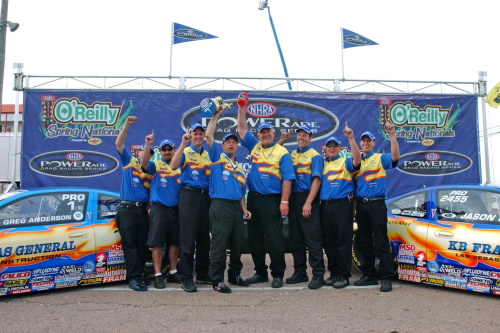 “Everybody’s doing a really good job, and we’re getting better every week,” he said, eyes flashing to Anderson who had just rounded the corner and was getting out of his own Pro Stocker. “I’m pretty excited – it’s great to race Greg in the final.”

Anderson, fresh off of a semifinals victory over Jeg Coughlin Jr. and early round wins over Mark Whisnant and Larry Morgan, was just as gleeful as he emerged from his factory hot rod.

The two were nearly identical as they launched from the starting line with team owner Ken Black standing proudly behind them. Line was a smidge quicker with a .022-second reaction time to Anderson’s .023, but as his car drifted out of the groove and to the left, he had to lift. Anderson crossed the finish line first for a 6.738-second victory at 205.57 mph to a 9.466, 98.16.

“I don’t know that there is anyone I’d rather race than Jason in a final,” said Anderson after that first win over his KB Racing counterpart. “This team is just awesome.”

Anderson has gotten his wish many times since that day, with the Team Summit drivers meeting 37 times in the final round. The two raced six times in 2004, with Line claiming his first win over the boss and first of his Pro Stock career in Chicago. Through 2018, the Summit Racing duo raced one another at least once in all but two seasons (2008 and 2013). Their most recent final-round meeting was in Denver in 2018, where Anderson extended his advantage over Line to 21-16 in final rounds.

“I like racing Greg, and I’m running out of chances,” said Line, who will retire from Pro Stock driving duties at the conclusion of the 2020 season to focus on engine building at KB Racing. “He’s so competitive that I almost feel bad when he doesn’t win. I want to see both of us do well, but there can only be one winner.”

Anderson is still working on talking Line out of retiring from driving, but Line is standing firm in his decision in order to spend more time with his family and less time on the road.