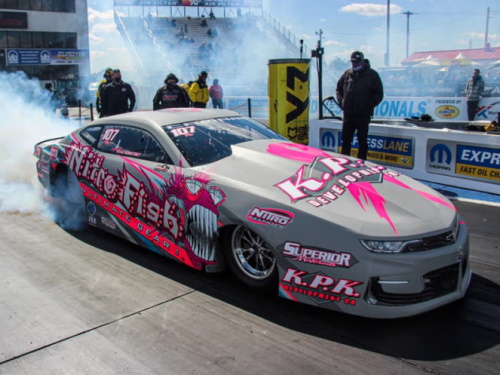 Pro Stock is one of the most technologically advanced and constantly evolving classes in the sport. It features naturally aspirated 500 cubic inch EFI engines and requires profound precision in every aspect – from machining and assembly to tuning and driving in a world of constant development and change.

Races are won or lost by mere thousandths of a second on a regular basis, and more so than the nitro-fueled cars in the series, the factory hot rods demand absolute finesse. Incredible attention to even the most minute detail is mandatory if measurable success is to be achieved – including the driver’s ability to deliver a near-perfect performance every time.

The two Pro Stock drivers up for Rookie of the Year are class-newcomer standouts Kyle Koretsky and Mason McGaha. They join Top Fuel campaigner Justin Ashley on the ballot.

Koretsky, driving the Nitro Fish Racing Chevrolet Camaro with power supplied by the eight-time championship-winning KB Racing team, was scheduled to make his debut in the category in March at the Amalie Motor Oil NHRA Gatornationals in Gainesville, but the event was paused due to the COVID-19 outbreak. Koretsky was fully prepared to make a strong NHRA debut after he licensed at the World Doorslammer Nationals in Orlando and rocketed to a massively quick 6.494-second pass at 212.39 mph in one of his first journeys down the quarter-mile.

When racing resumed in July with the E3 Spark Plugs NHRA Nationals at Lucas Oil Raceway in Indianapolis, Koretsky was finally able to add his name to the roster and follow in his father, Kenny Koretsky’s, footsteps.

“In my opinion, Pro Stock is the most difficult professional class there is,” said Koretsky, an accomplished Sportsman racer who has regularly entered Super Comp along with Pro Stock to double up on seat time this season. “Each class requires a certain skillset, but you have to make the perfect run every single time in Pro Stock. That’s hard to do; even the best in the business make mistakes.”

The talented and diverse 31-year-old drag racer has qualified for each event he has attempted, including Indy 3, formally known as the Dodge NHRA Indy Nationals presented by Pennzoil. He earned the first round-win of his career at the most prestigious, historic race on tour, the U.S. Nationals, with a victory over Jeg Coughlin Jr., and he defeated Coughlin again in the first round of the much-delayed Gainesville race.

Twice this season, Koretsky has clocked top speed of the event to prove that he can effectively handle the horsepower that KB Racing is dishing out.

“It’s an honor to even be racing Pro Stock in general, but to be considered a contender for Rookie of the Year is huge,” said Koretsky. “It was definitely one of our goals, not just to qualify for the award, but to try to contend for it. I think we’re doing pretty good. To get it would be huge.”

McGaha, who got his start in NHRA’s Summit Racing Jr. Drag Racing League, has attended most every event his father, Pro Stock’s Chris McGaha, has contested. He has watched his dad learn and grow and win in Pro Stock, and he was logging that knowledge all along the way.

The younger McGaha, at just 18, qualified for the esteemed U.S. Nationals – with 22 drivers vying for a spot in the 16-car field – and defeated his own father in the first round using a quicker reaction time to claim a holeshot win. He went on to reach the semifinals that day. So far in NHRA competition, the only drivers who can stop McGaha in eliminations are world champions Erica Enders and Jason Line.

“This is an award that fuel drivers have usually won in the past, and it almost seems like Pro Stock has been overlooked,” said McGaha. “It’s a pretty cool honor to have your name thrown in the hat, and it would be really special to be in such a small group of Rookie of the Year award winners in such a tough class. It would be an achievement.”