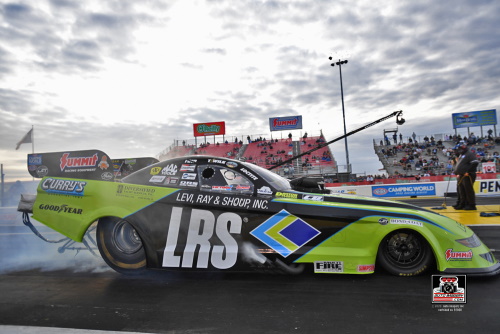 BAYTOWN, Texas (October 25, 2020) – The Levi, Ray & Shoup Ford Mustang nitro Funny Car had a not-great day on Saturday at the 33rd annual Mopar Express Lane NHRA SpringNationals, and Tim Wilkerson is ready to make it right on Sunday. Wilkerson will be starting from the No. 12 position and will begin his day with a first-round meeting with Alexis DeJoria.

“We just had motor problems all day today,” said Wilkerson, who clocked a 4.291-second pass at 225.71 mph in the first session and then a disappointing 7.461 in the later round of qualifying. “We hurt the motor the first run, had a hole out, and it hurt a piston in it. Second run there, I think I just had it too tuned up.”

The season is drawing to a close, and this event at Houston Raceway Park is the second-to-last of the year. Wilkerson is eager to get a win before the year is done, and the team owner/driver/tuner knows he has the car to do it. In the nine races so far contested this year, Wilk has reached the semifinals twice and logged a runner-up finish (in Gainesville). He’s qualified in the top half five times and qualified third or better three times.

“That’s great, but we need to win some rounds,” he said determinedly. “I’ve got a lot of maintenance to do tonight, but as soon as I can get that behind me, I’ll sit up there and stare at [the data]. I’m going to figure out what I’m doing right and wrong and go from there. We have some strange power here because it’s a sea level track, and it’s more dicey than what we’re used to. But I take this personal. We’ll get it figured out.

Eliminations for the Mopar Express Lane NHRA SpringNationals will begin at 10am CT on Sunday, October 25, 2020.