The all-eighth-mile series will attempt to finish the season finale on Sunday, though rain remains in the forecast.

“We’ve been trying to get ahead of these storms all weekend, and we just came up a little short tonight,” said Tyler Crossnoe, race director, PDRA. “We are watching the forecast and we’ll do the best we can to get this race completed when the weather allows.”

Schedule updates for the PDRA Proline Racing Brian Olson Memorial World Finals will be posted at www.PDRA660.com and the PDRA Racing Facebook page. 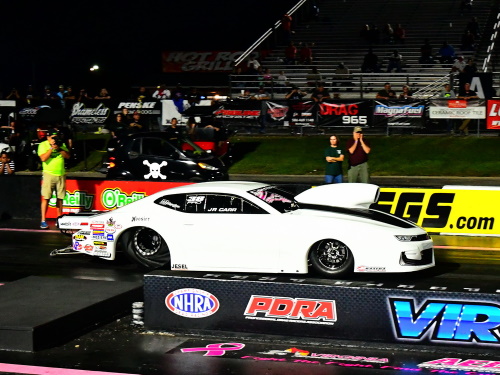 EXTREME PRO STOCK
Mountain Motor Pro Stock veteran JR Carr entered the 2020 season without a low qualifier award or event win in PDRA Extreme Pro Stock competition. He picked up both accomplishments earlier this season, then added one of each again at the World Finals. He won his second PDRA “660 Man” trophy in an unceremonious final round, clicking off a 4.394-second pass at 161.52 mph in his Frank Gugliotta-tuned ’20 Camaro while Dwayne Rice’s ’18 Camaro sat silent just past the 60-foot mark.

“I was underwhelmed at first when I was shutting the car off,” Carr said. “I had never been through a pass where the other car was still on the track. That just got in my head. Then I calmed down and thought, ‘It’s a test pass.’ I was trying to really shallow stage and I put it on the wood and [the stage bulb] wouldn’t stay lit. Finally I just moved in, staged and the car went left and I shut it down. It was not how I wanted to win. But a win’s a win. We’ll take it. We had to be there to have that opportunity and it is what it is.”

“We did run good,” Carr said. “We ran really good numbers. The car’s consistent and I drove pretty good. My team’s been flawless. I’m so thankful for all of them and all the sponsors and guys that give us the good stuff. We couldn’t do it without them. I’m just the lucky guy who gets to drive it.”

In the PDRA’s other professional and sportsman classes, the following drivers are left in competition: