KOKOMO, IN (October 25, 2020) — A raise of his NOS Energy Drink can to the crowd and a delighted sip from it was all Sheldon Haudenschild needed to do to acknowledge his career milestone Saturday night at Kokomo Speedway.

The Wooster, OH driver claimed his seventh win of the 2020 World of Outlaws NOS Energy Drink Sprint Car Series season in his 300th start. He entered the year with seven wins in total through his three years as a full-time driver. 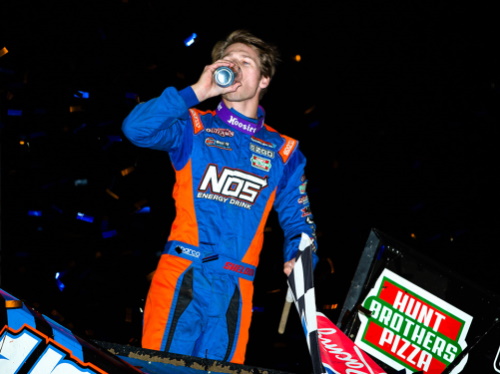 “I feel like having the crew and the team behind you gets your confidence to a whole nother level,” Haudenschild said. “I feel like I’m just getting a glimpse of what Donny (Schatz) has had for a long time. Just trying to keep the same guys together and keeping the team together and growing as a team. Not just as myself. That’s been my biggest goal this year, just work good with my guys and work on myself as a driver and just try to get the whole package together.”

To claim the win in the Series first time back to Kokomo since 2015, he had to beat the driver he mention – 10-time Series champion Donny Schatz.

The two started on the front row for the 40-lap Feature, and each had a milestone to try and achieve. Haudenschild was looking to win in his 300th career start, while Schatz was on the hunt for his 300th career win.

Haudenschild wasn’t shy about the onslaught he was willing to put on to achieve that milestone either. While mixed in a three-way battle for the lead on the final lap of the DIRTVision Fast Pass Dash, Haudenschild threw the slide job of the year on Aaron Reutzel and Schatz to steal the Dash win in the final corner. 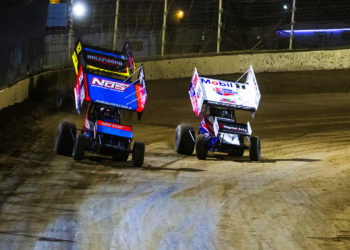 That set him up as the early favorite to conquer the quarter-mile speedway for 40 laps. And when the Feature commenced, he didn’t let that theory down. Haudenschild led the opening lap and pulled away from Schatz in the early stage of the race.

However, Haudenschild was already in heavy traffic by Lap 6. That allowed Schatz to reel in the NOS Energy Drink #17. While Haudenschild tried to navigate his way through traffic around the high side of the track, Schatz worked the bottom.

Schatz snuck underneath Haudenschild on Lap 8 and the two raced side by side for about the entire circuit. With a slower car blocking Haudenschild’s lane off Turn 4 and Schatz gifted clean air on the bottom, the Tony Stewart/Curb-Agajanian Racing CARQUEST #15 pulled ahead to officially take the lead on Lap 9.

With Schatz out front, Haudenschild broke out his notebook and pen and went to school. He studied what Schatz was doing; what lines he was running. Haudenschild could make the most speed up top, but at times he overstayed his welcome along the cushion. At times he bounced off of it, allowing Schatz to pull further away.

After three cautions, Haudenschild had gathered enough notes to put his newfound knowledge to the test.

On the restart with 17 laps to go, Haudenschild placed his car up high in Turns 1 and 2 to build a run that would rocket him down the backstretch. He used that momentum to sneak underneath Schatz the next corner and drag race with him down the front stretch. When they found their way back to Turns 1 and 2, Haudenschild and Schatz ran side by side, inches apart, in perfect tandem through the corner.

They remained that way down the back stretch before Haudenschild made better work of the low lane than Schatz could of the top and reclaimed the lead on Lap 25.

“I got the lead there early and Donny got by us,” Haudenschild said. “I just tried to watch Donny there. You can learn a lot from watching him. He is so smooth and makes it look so easy. He was just running a little bit higher and keeping his speed up. I kind of slowed her down in (turns) three and four and just started to hit the bottom a little slower and started to get off the corner. I got under him and ran beside him for a couple laps there and was able to clear him.” 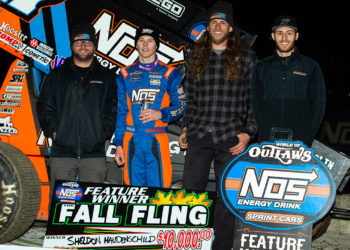 Once Haudenschild reclaimed the lead from Schatz, he never relinquished it. Schatz maintained the runner-up finish – his second podium in a row.

“He was better than we were,” Schatz said about Haudenschild. “He made the top in (turns) one and two work. I wasn’t going to do it. He was up the fence and it just wasn’t me. I tried to make something else work and he got the best of us on that. That’s what got the win.”

While Haudenschild pulled away with the victory in the final five laps, reigning champion and current points leader Brad Sweet captured most of the attention. He was in position to finish fourth, but a cloud of smoke, laced with oil, began to billow from his engine. The smoke blew the entire way around the track and worsened as he went. Sweet slowed and fell to an 11th-place finish.

With two races remaining this season, that helped Schatz, Haudenschild and Logan Schuchart, who finished third after starting ninth, chip away at Sweet’s lead.

“I’d liked to put pressure on him (Sweet),” said Schuchart, who is currently second in points. “He has a good lead right now. Those guys are fast every night. I’m just proud of what this team did this year and if we can put some pressure on him in these last two races and make something happen. We run good at Charlotte and I think the last time we were here at Kokomo we were lap traffic. So, I just want to keep growing with this Drydene performance products team.” 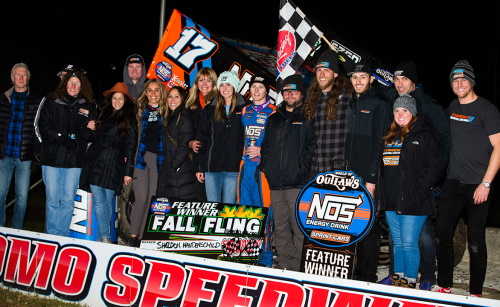