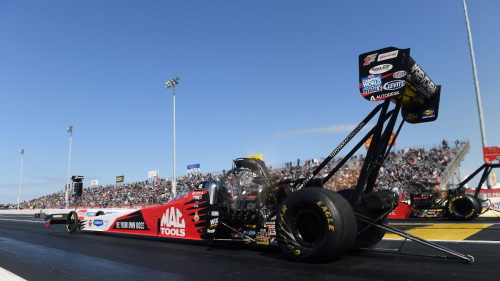 Doug Kalitta and the Mac Tools Top Fuel dragster will leave Houston Raceway Park No. 2 in the Camping World Top Fuel standings. The team raced to a quarterfinal finish from the No. 5 qualifier position and will head to The Strip at Las Vegas Motor Speedway with a serious but not insurmountable point deficit. There will be 30 points awarded each round and with a little help Kalitta could be in control of his championship destiny.

“We knew the championship would come down to the last race,” said Kalitta. “We have a hole to dig out of for sure. The one thing about this Mac Tools team is we are going to keep fighting. There are points and half in Las Vegas and if we get a couple quick qualifying runs we can make up some ground on Saturday. We are going to go into the weekend with our focus on winning the race and getting the championship.”

In the opening round today Kalitta outran Texan Kebin Kinsley for his 21st round win of the season. The Mac Tools Top Fuel dragster never trailed in the race. Kalitta grabbed a starting line reaction time advantage and then he powered to victory with a 3.716 second at 327.27 mph run. It was a big jump in performance from his best qualifying effort and gave him lane choice going into the quarterfinals.

In a close quarterfinal race Kalitta fell with a 3.747 second elapsed time slowing just slightly from his first round winning time. The team will head to The Strip at Las Vegas Motor Speedway needing some help to chase down the points lead but with a dragster that has the performance numbers to go rounds.

Quotable:
Doug Kalitta on championship chase: “We didn’t make up ground this weekend which is disappointing. There is one race left and we just want a chance to get that championship. We have that opportunity and the Mac Tools team just has to capitalize on it.” 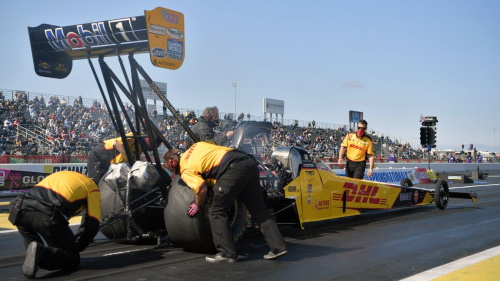 Quarterfinal Finish for Langdon and DHL at Springnationals

Heading into race day at the NHRA Springnationals at Houston Raceway Park Shawn Langdon and the DHL Kalitta Air Top Fuel team knew they would have their hands full with a tough first round opponent. As the No. 8 qualifier Langdon matched up with rookie of the year contender Justin Ashley for the sixth time in ten races. Langdon held a 3-2 winning advantage heading into today’s race.

The first round race went Langdon’s way from the start and he extended his head to head record to 4-2 against Ashley. He had a stellar reaction time of .031 to Ashley’s .037 and the DHL Kalitta Air dragster never trailed. As Langdon was pulling away Ashley tried to pedal his dragster but the 2020 U.S. Nationals champion was too strong and got the win.

For the second week in a row Langdon had to race the Camping World Top Fuel point leader. Last week Langdon faced Steve Torrence in the semifinals and today the quarterfinal match-up of two world champions was another tough race. The DHL dragster took off and was side by side as each dragster approached half-track. As the finish line approached Langdon hazed tires and slowed to 4.063 as he crossed the finish line.

“We had a good win in the first round for DHL, Kalitta Air and Toyota,” said Langdon. “Then we had tough competitor in the second round. We had an aggressive tune-up and gave it a good run. We are giving it our best every round. Today did not go the way we wanted. This DHL Kalitta Air dragster will be ready for Las Vegas.”

Quotable:
Langdon on wrapping season up in Las Vegas: “This season has had a lots of ups and downs. I am glad we got as many races as we did. There is one more chance to get a win. This DHL team will be ready for qualifying and race day in Las Vegas. We aren’t going to leave anything back at the shop. Our focus will be getting the best out of this DHL Top Fuel dragster for one more race.” 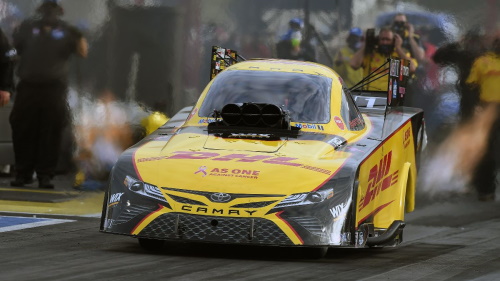 Todd Heads To Vegas After Quarterfinal Effort In Houston

J.R. Todd and the DHL Toyota Camry Funny Car will be leaving the NHRA Camping World Springnationals at Houston Raceway Park with both ends of the Funny Car track record book. He posted low ET and top speed of race day as wrote his name into the performance record book. In the opening session Todd blasted down the track with a winning and record setting time of 3.894 seconds at 333.49 mph. The DHL Camry Funny Car’s speed was the fastest of both Top Fuel and Funny Car, a tremendous achievement that brought the Houston crowd to its feet.

The first round win came over veteran Terry Haddock who smoked the tires and costed across the finish line. The scoreboards lit up 3.894 to 9.360 seconds and the DHL Camry Funny Car never trailed in the race. The win also gave Todd lane choice over Tommy Johnson Jr. on the quarterfinals.

“We had a great run in the first round,” said Todd. “It’s nice to have run the fastest pass of the weekend in this DHL Camry, but in the end, that’s not why we’re here. We’re here to win. This is the second straight race that we’ve run really well in the first round, but we need four of those. We have one race left to get it done. We’ve won in Las Vegas three times in the past couple of years and our goal will be to get a fourth next week.

Todd’s day came to an abrupt end with a close quarterfinal finish. Both Funny Cars launched off the starting line almost together but by half-track Johnson had a slight lead and he held this Funny Car’s nose just in front of the DHL Funny Car as they crossed the finish line. Todd’s 3.979 second run at 326 mph was off his opening round performance.

Heading into race day Todd brought his best qualifying position of the season, a No. 3 starting spot. His previous best was a No. 4 qualifier at the first race in Indianapolis back after the season break.

“We made the most of the two qualifying sessions for sure. Starting No. 3 give us a lot of confidence. We just need to capitalize on race day. I know we have the team to do that. We have one race to wrap up the season and we have had a lot of success at The Strip at Las Vegas,” added Todd.

Quotable:
J.R. Todd on wrapping up season in Las Vegas: “I think we can finish as high as fifth and we could get to fourth if things fall our way. There will be points and a half so that makes it exciting. I have won at The Strip before and I love racing there.”