BAYTOWN, Texas (October 26, 2020) – Team Summit closed out a productive weekend at Houston Raceway Park with a semifinals finish for Greg Anderson and a crackling kindling of continued hope for Jason Line as the 2020 NHRA Camping World Series championship remains well within his reach.

Anderson carried the banner for Summit Racing into the quarterfinals with the second-quickest run of the first round, a 6.542-second pass at 210.44 mph, to beat Mason McGaha’s 6.576, 209.88. He repeated the effort with a second-quickest 6.550, 209.82 in round two to defeat Mason’s dad, Chris McGaha, and then it was on to the semifinals for a meeting with Jeg Coughlin Jr.

The veteran racers were well-matched coming into the round in terms of statistics, with Anderson holding an 11-10 advantage in previous semifinal rounds, and the two put on a heck of a race for the fans. They launched nearly in unison and were glued together as they raced down the quarter-mile. As they crossed the finish line, the win light illuminated in Coughlin’s lane. The margin of victory was a tiny .002-second. 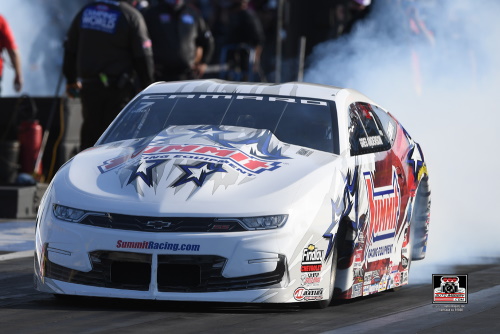 “All of these races are decided by thousandths of a second, and any one little thing on the track can decide whether you win or lose,” said Anderson. “My Summit Racing Chevrolet Camaro was a great racecar and I struggled last week as a driver, and this week I got better as a driver and had a great car until that last run. We spun the tires real bad. We have to get the car and driver together again, and when we do, were going to win a lot of races. I’m having fun; it’s good to be competitive.”

It was a fruitful day for four-time Pro Stock champion Anderson in points as he moved up to No. 4 in the class standings with just one race to go. Although it would be a longshot, the championship is still, technically, within Anderson’s grasp. Summit Racing teammate Line, however, is in the thick of things as the NHRA Camping World Drag Racing Series journeys to Las Vegas for next weekend’s NHRA Finals.

Line logged a stunning loss in the first round when he was delayed leaving the starting line and forfeited the match to Chris McGaha on a holeshot. He leaves Houston tied for second with Coughlin and just 35 marks behind Erica Enders.

“There’s a chance, but we’ll need a little good fortune – and we didn’t help ourselves today,” said Line, who will be retiring from Pro Stock at the conclusion of this season. “It’s a tough gig somedays, but there is definitely a chance. I want to win the championship; I want to win it for Ken Black and for Summit Racing. It would be a nice going away present for sure.”