MELVILLE, NY (October 27, 2020) – As his rookie season comes to a close this weekend at The Strip at Las Vegas Motor Speedway Justin Ashley, driver of the Strutmasters.com Top Fuel dragster powered by MANCAPED™, has checked the boxes on most of his rookie goals. Entering the NHRA Camping World Drag Racing Series season almost nine months ago the 25 year-old driver could never have anticipated all the ups and downs that transpired. Through all the starts and stops Ashley and his team never lost focus and were able to contend for the championship and have a chance at a Top Five finish this weekend.

“We were only planning on running 12 races this season when the 24 race schedule was released. Our goal was to contend for Rookie of the Year, represent our sponsors every time we hit the track and hopefully win a race. We achieved all those goals. I hate that the season was shortened but it gave this Strutmasters.com team the chance to race the whole season and really be in the mix for the championship. I think that will pay dividends as far as experience down the road for this rookie team.”

A quarterfinal finish at the season opening Winternationals set the tone for Ashley’s rookie campaign as a driver to watch. As the No. 11 qualifier he lost to eventual race winner Doug Kalitta after defeating 2013 world champion Shawn Langdon in the first round. Ashley would consistently face some of the toughest Top Fuel drivers throughout the rest of the season. He consistently found himself racing Langdon as well as former champions Steve Torrence and Antron Brown. Last weekend Langdon offered his take on Ashley’s rookie season and impact on the class. 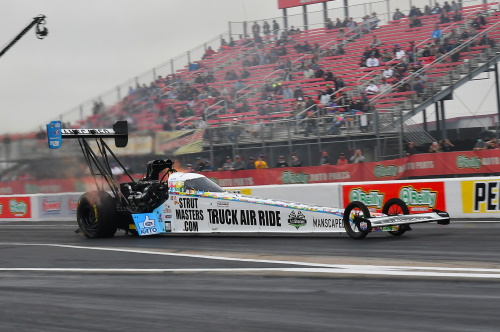 “He has done a fantastic job on the starting line,” said Langdon, a 15-time winner and 31-time Top Fuel finalist. “He came in and raised the bar on reaction times. That is really rare to see. For someone to do that first you have to tip your cap to them and second you have to get back in and do your homework to better yourself to raise your bar to that level. That is what he has done to us and what we have been trying to do and catch up to him. For his rookie year he has his first victory, he has gone some rounds and he has definitely gotten his name out there. He has gotten noticed and that is really all you can ask for in your rookie season.”

When the season restarted in July Ashley, his crew chief Aaron Brooks and his Funny Car national event winning father, Mike Ashley, realized racing the remaining schedule was a viable option. Thanks to support from a strong group of sponsors including Strutmasters.com with Chip Lofton, MANSCAPED, Auto Shocker, Kato, Lucas Oil, King Engine Bearings, Justice Brothers, Sanit, Guardlab, Hero Soap Company, Menards and Impact the team was able to mount a strong run. At the time the team was No. 6 in the points and eventually rose to No. 4 at the end of the U.S. Nationals thanks to their postponed victory of the Summernationals and a semifinal finish at the biggest race of the season. 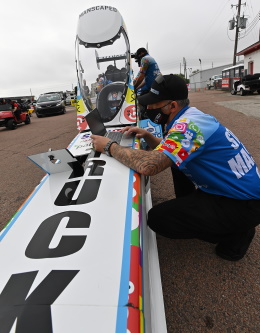 “The U.S. Nationals weekend was our high point of the season,” said Ashley. “We won the Summernationals on Saturday and then raced to the semifinals of the U.S. Nationals on Sunday. You look at how far we came in six races at that point we were very fortunate. It was a lot of hard work by a lot of really good people and teammates. The last portion of the season has been a struggle but that will only make us stronger. I am looking at this weekend at Las Vegas as one more chance to make some positive memories and make this team stronger for 2021.”

As the tour made the run to new tracks away from Indianapolis Ashley and his team began to experience some rookie season growing pains. The struggles were balanced by career best numbers in Dallas with a 3.687 elapsed time and the bonding every team needs when they are racing four weekends in a row.

Heading into The Strip at Las Vegas Motor Speedway Ashley will be looking to build on some retooled momentum from the Mopar Express Lane Springnationals in Houston. Sitting in the No. 7 position in points and with 30 points available each round Ashley could finish as high as No. 5 in the Camping World Top Fuel point standings.

“Our goal every race is to win and be professional. It will be exciting to wrap up the season at The Strip at Las Vegas Motor Speedway. It will be the end of a long month and we want to end on a high note. I will have a great group from Auto Shocker at the race and we want to give them an amazing experience,” added Ashley.