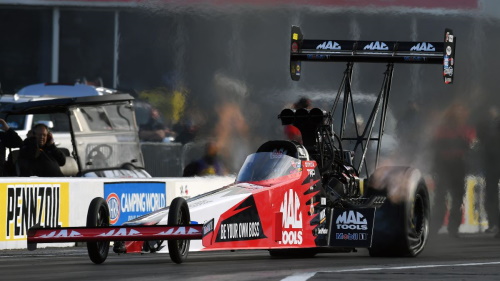 Doug Kalitta and the Mac Tools Top Fuel dragster team will need some help if they are going to secure their first NHRA Camping World Drag Racing Series Top Fuel world championship this weekend. Only two drivers are in contention, Steve Torrence and Kalitta, with Kalitta trailing the point leader by 101 points. There are 168 points up for grabs in competition including qualifying points and the 30 points awarded per round win. There are a number of scenarios that lead to a Kalitta world championship but the most realistic is a Torrence loss in the first round and a Kalitta victory.

“We have a chance to get the world championship and that is all we want,” said Kalitta. “It is a long shot but strange things can happen on race day. Nothing is guaranteed. This Mac Tools team is going to go out there and take care of our business. That is all we can do.”

The Mac Tools team has raced to four final rounds this season and picked up two wins. Kalitta started the season with a win at the Winternationals and also won the Midwest Nationals in St Louis earlier this month. In 2019 Kalitta picked up a season opening win at Auto Club Raceway and closed the season with a win there as well. He would like to repeat that bookend victory celebration at The Strip at Las Vegas Motor Speedway.

“We missed the championship by three points last year but won the last race,” said Kalitta. “This year we need to win the last race and I think we could win the champions by about the same margin. I honestly don’t really look at that stuff but our focus Saturday and Sunday will be to put this Mac Tools dragster in the winner’s circle.”

“I don’t think there are tracks that are lucky for a driver. I do think there are tracks where your team has a good handle on the conditions. This Mac Tools team has a lot of data so I know my crew chief Rob Flynn will be able to make the right decisions when the time comes. We only have two qualifying runs so that makes it tricky but we can’t race with any regrets,” added Kalitta.

Quotable: Doug Kalitta on Top Fuel championship battle: “We have been here before so I don’t feel any extra pressure. We just need to focus on what we can control. If we do that then no matter what happens we will know we gave it our best.” 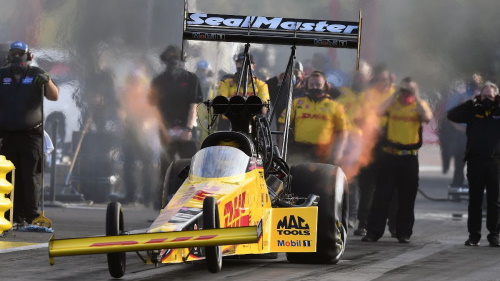 With the final race of the 2020 NHRA Camping World Drag Racing Series season just days away Shawn Langdon and the DHL Kalitta Air Top Fuel dragster team are looking to shore up another Top Five finish. Langdon sits No. 5 but there are a number of pursuers looking to try and move around the 2020 U.S, Nationals champion. Maintaining his position in the Top Fuel standings would mean Langdon finished Top Five six times in the past nine seasons he competed in the category including his championship season of 2013.

“Getting back into the dragster this season was an adjustment but so much muscle memory came back,” said Langdon. “This DHL team grew stronger as the season went on and definitely the U.S. Nationals win in Indy was our high point so far.”

The Strip at Las Vegas Motor Speedway has been a track where Langdon continues to search for that first career Top Fuel win in the desert. He has two No. 1 qualifiers from 2013 and 2009 but the veteran Top Fuel and Funny Car racer has yet to reach a final round at the race track located 20 miles north of Sin City

“We are looking to get the win this weekend and finish the season on a high note,” said Langdon. “You think about the last race of the season over the off season so you want to have a positive memory. The good news is we could finish in the Top Five and hopefully have a couple wins when we wrap this thing up.”

This season racing the DHL Kalitta Air Top Fuel dragster for legendary driver, crew chef and team owner Connie Kalitta has energized Langdon. Spending time with the iconic Kalitta before rounds and at the end of the day has been a learning experience all its own. While the lessons were not long lectures the message always came through loud and clear.

“Connie doesn’t talk a lot but when he does I definitely listen,” said Langdon. “There have been times when he has given me a heads up that he has an aggressive tune up and I should be ready to haul butt. Those are the times you get really excited. He has forgotten more about drag racing than I think I will ever know. This season has had its ups and downs like any season but getting to race for Connie Kalitta has been a privilege.”

Quotable: Shawn Langdon on finishing season in Las Vegas: “I am glad we got as many races in as we did. I lot of people, especially track operators like Chris Powell here in Las Vegas put in a lot of work to make it happen. We appreciate those efforts and want to go out and put on a good show.” 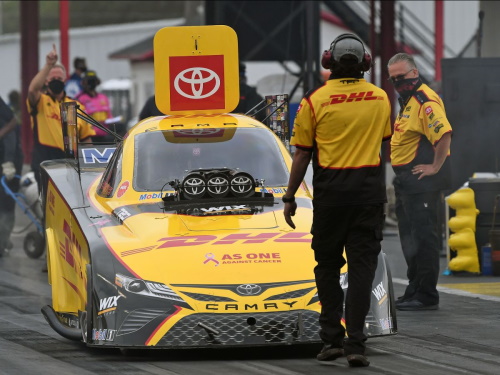 J.R. Todd and the DHL Toyota Camry Funny car team have done it all at the Strip at Las Vegas Motor Speedway. Last year they won their second consecutive Four-Wide Nationals in the spring and at the end of 2018 their victory at the fall Las Vegas Nationals all but wrapped up their Funny Car championship. Todd also raced to three Top Fuel final rounds in 2016, 2014 and 2006. That kind of winning experience could come in handy this weekend at the NHRA Camping World Drag Racing Series wraps up a wild 2020 season.

“This season has been a marathon for sure,” said Todd. “We got off of a slow start at the first two races and then we had the break in the middle. Once we got going again in Indianapolis we made some strides getting to back to back final rounds including the finals of the U.S. Nationals in Indy.”

Throughout the season Todd has stayed on the heels of the point leading Funny Cars. A strong finish at the Las Vegas Nationals could easily see him finishing in the Top Five and a fourth place finish would be a lofty goal. Either position would be his second highest point finish since his move to Funny Car in 2017.

“This class is so tough and we have been working to break through,” said Todd. “Todd Smith and Jon Oberhofer along with these Yella Fellas on the crew are grinding it out. We have tested and mad some really quick runs. We know this Camry Funny Car can put up good numbers. We just need to string them together on race day.”

The performance of the DHL Toyota Funny Car has been strong in qualifying even with the majority of the events only giving the team two shots at the race track. Since the restart of the season Todd has qualified in the top half of the field at every race and with his best qualifying performance coming last weekend at Houston’s Springnationals, a start from the No. 3 qualifying spot.

“We will have point and a half in Las Vegas plus some extra points in qualifying. Some quick runs on Saturday could set us up for a great race day. I really want to finish the season on a high note for DHL, Toyota, Wix Filters, Mobil 1, NGK Spark Plugs and all the people that stuck with us this season,” added Todd.

Quotable: J.R. Todd on final race of season: “We definitely want to end the season with a win. We have had success at The Strip so we will be ready to go some rounds on Sunday.”