LAS VEGAS (October 28, 2020) – Cruz Pedregon and team are looking ahead to the upcoming Dodge® NHRA Finals in Las Vegas with the fortitude brought on by the tragic loss of a team member and co-crew chief in wanting to honor his memory. Eric Lane was killed in an off-track accident last week and the team has been fighting through the emotions to do what they say he would have wanted them to do in the last race of the season.

“It still hasn’t fully settled in with us, so we’re pressing on to implement so many of the things ‘Hop’ helped us with in doing away with the things that weren’t working on the car, keeping the good, and trying several new things,” Cruz says. “His impact during his short time with the team is already paying off in the success we had last weekend — making the best pass of our 2020 season and coming so close to a semi’s win only to be denied it by a one-second hole shot.”

In memory of Lane, Cruz Pedregon Racing has established a GoFundMe that will help support Hop’s wife and the young daughter he left behind. The fund has really taken off through the generous contributions of the NHRA family and fans and those who knew the long-time drag racing professional.

Cruz notes that the focus of this race will be a continuation of the team’s efforts to remember their co-crew chief while making the final runs in this year’s Pink Fund tribute paint scheme in honor of Breast Cancer Awareness Month. Snap-on, the team’s primary sponsor, has dedicated a portion of sales to The Pink Fund over the past six years totaling $475,000 to meet non-medical expenses of individuals undergoing breast cancer treatment. For more information, check out ThePinkFund.org. 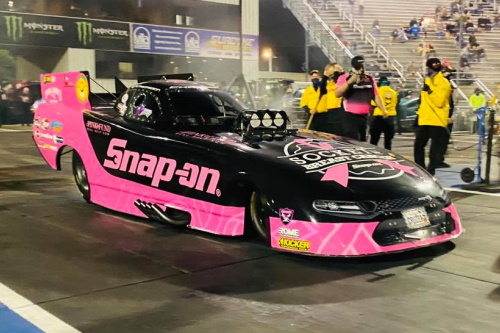