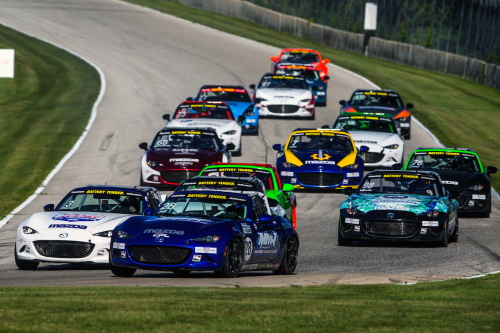 2021 marks the first year of a recently announced new alignment with International Motor Sports Association (IMSA) as the sanctioning partner. With seven event weekends each featuring two MX-5 Cup races for a total of 14 rounds, next year’s calendar will be the longest in series history.

The 2021 season will also be the fifth year for the series to be managed by Andersen Promotions, which has continued to elevate the professionalism and presentation of the highly competitive category.

The 2021 Mazda MX-5 Cup season kicks off with a new track for the series, and one that has been on top of competitors’ lists for a long time: Daytona International Speedway. 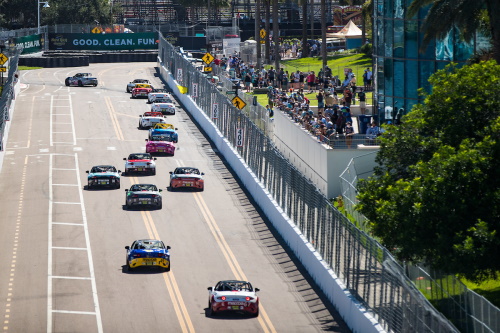 From there, the series moves on to a series of iconic events, starting with a return to the Grand Prix of St. Petersburg street circuit, WeatherTech Raceway Laguna Seca, and Mid-Ohio Sports Car Course.

In July, MX-5 Cup returns to Canadian Tire Motorsports Park (CTMP) for the first time since 2016 as part of the IMSA event weekend, marking a return to international competition for the category.

The CTMP round will be followed by another fan and driver favorite, Road America, as part of the traditional IMSA WeatherTech event weekend. One of the longest tracks on the continent, Road America has delivered remarkably short margins of victory as the field of MX-5 Cup runners jockey through four miles of drafting and drifting.

The 2021 season wraps up with a trip to the Petit Le Mans weekend at Road Atlanta in October where the series champion will collect their $200,000 career advancement scholarship from Mazda. The last time MX-5 Cup raced at Road Atlanta was in 2016, also alongside the IMSA season finale event. 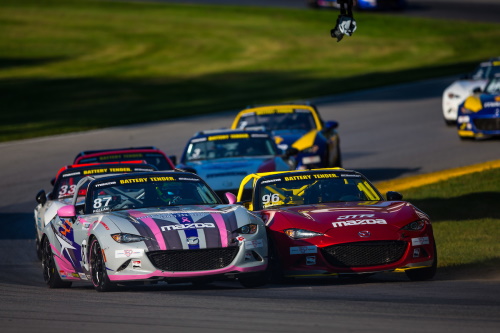 “The 2021 schedule for MX-5 Cup has been developed with our new partners at IMSA,” Director of Mazda Motorsports Nelson Cosgrove said. “The IMSA weekends offer a lot of flexibility in terms of where we can race, and they are some really amazing tracks to race on at that! We are starting off the year at what will be a really interesting Rolex 24, and being part of that event is going to be really cool. It doesn’t leave much for an offseason, but everyone is super excited about it.”

Mazda has a decades-long history of active motorsports involvement and support at all levels of the sport. The move to IMSA weekends will see the Mazda MX-5 Cup, which represents the pinnacle of Mazda’s grassroots activity, racing on the same weekends where the internationally-recognized IMSA WeatherTech Mazda DPi program is in action, giving fans the full scale of the brands commitment to motorsport.

“Having the Mazda Motorsports program from the top level of DPi to the entry level into the IMSA paddock with the MX-5 Cup is a great way for us to support our fans and all our competitors,” said Cosgrove. “Moving on from Daytona, we’ll be back to St. Pete for a fun early spring event and then the rest of the way we’re on IMSA weekends. I’m really excited about being a part of all those weekends and having a presence in the IMSA paddock. Hopefully, it leads to a strong championship and I expect, based on what we’re hearing early, that the car counts are going to be really good, so there will be a ton of competition.”

More details on the 2021 Mazda MX-5 Cup season will be announced as it becomes available. For further information on MX-5 Cup visit www.mx-5cup.com.