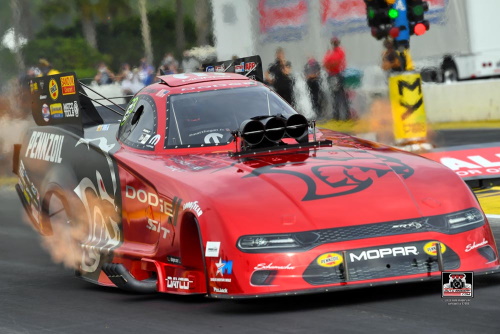 Quotable:
“It’s kind of wild that we’re here – starting the season and then stopping, and then not even knowing if we’d even have a season, or what it would even entail. It’s been a weird year, and we’re happy to be racing, and even happier to be in this year’s championship hunt. We’re in the thick of it right now. Our Mopar Dodge Funny Car team has done really well at Vegas in the past. We qualify well there and we actually won that race the last time we were there (October 2019), so we’ve got some great data from that track.

“I have a lot of confidence in our team, and our car, and what we’re doing. We’ve made up a lot of ground in a little bit of time. We’ve done what we needed to do to put ourselves in this position to have the points lead. That was a huge round against Tommy Johnson in the semis (in Houston) that we just didn’t win. If we had won, that would’ve pushed him closer to being out of contention, and given us an extra point cushion over Jack, so those are tough to lose. You can go back through your season and look at all kind of stuff where you’ve lost small points here and there, but at the end of the day, it’s going to be what it will be. I just want to enjoy this ride right now. You never know how many times you’ll have the opportunity to run for a championship, so putting too much pressure on yourself really doesn’t change anything. I just want to go out there this weekend at the Dodge NHRA Finals Presented by Pennzoil and treat it like a regular race. We want to qualify well and take it one round at a time, and if we can do that, we’ll be successful. We’re 43 points ahead, but with the points-and-a-half deal things can really turn quickly, but I’d rather be leading than following, and that’s where we’re at right now. We’ve got to keep digging, stay focused, and go rounds in Vegas, and if all goes according to plan, I’m looking forward to partying hard Sunday night and celebrating with my team.” 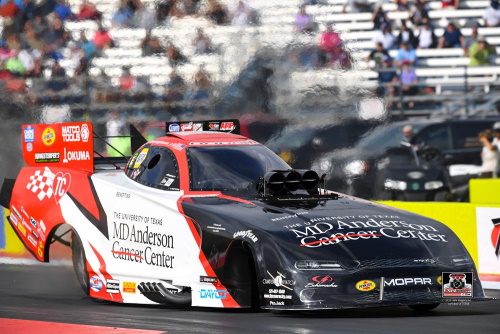 Ranked 2nd in the standings; 800 points

Quotable:
“It’s been an interesting year for sure and it’s coming to the last race of the season. There’s lots of mixed emotions. Honestly, I’m happy. We’re coming into this last race with a shot at the championship and I’m happy that we even got a season because it looked like maybe after the second race of the year we wouldn’t have a season at all.

“I’m excited to come into Vegas with a shot at this championship and the team has had a great season. It’s a track where I have had some success and do pretty well at. I’m a round-and-a-half behind Matt (Hagan), and Jack (Beckman) is right on our heels. To see the dominance that the Don Schumacher Funny Cars have had all season is really exciting. I think we are all excited to see if we can’t close out the season and sweep all the races with the DSR Funny Cars.

“I’m going to go out there and enjoy it and at the same time, give it all we’ve got and ride the momentum we’ve got coming off the win and the last few races on the tour. I’m happy for the guys. I’m happy for our MD Anderson Dodge Funny Car team. We’ve had a great season and would love nothing more than to be able to cap it off with a win and have a few things go our way and maybe sneak away with the championship as well.” 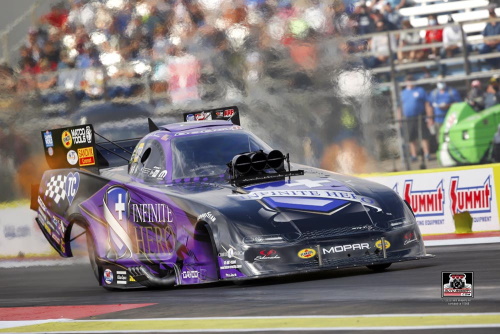 Ranked 3rd in the standings; 799 points

Quotable:
“I think just about everybody can’t wait to put 2020 in the rearview mirror, but I think the NHRA fans are in for a huge treat with the points chase, specifically in Funny Car where you’ve got three cars within two rounds of each other. It’s probably going to be one of the most thrilling conclusions ever, and I fully expect the Funny Car championship is probably going to go down to the final round of the final race on the final day of the season. For a fan that’s amazing and from a driver’s perspective that’s the deal you want; to be in it going into the last race of the season. There’s a lot of different things on the line. For us, obviously, the championship, and for our team it’ll likely be the last race with Infinite Hero, and we’re not sure what will happen next year. So, there’s a lot of extra incentive to try to end the year on a positive note. As long as we win the race and Matt (Hagan)’s car is not in the other lane in the final round, I would consider that as perfect a year to a season as I’ve ever had, so I’m very much looking forward to this.” 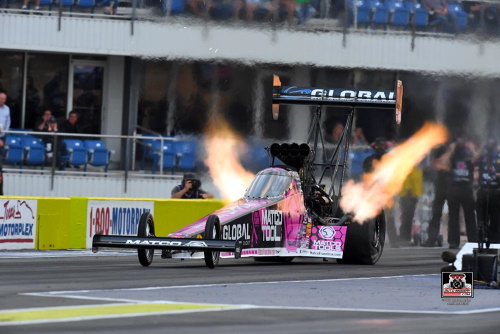 Quotable:
“Looking forward to our final race of the year. Our Matco Tools car has really been coming along lately and starting to get in the groove. We’ll roll the dice in Vegas. It’s a points-and-a-half race and there’s room to move up in the standings, and we want to end the season on a good note. No better place to do that than in Vegas. I have a lot of good memories at that track. I’ve locked-up championships there in the past, and even though we’re not in contention this year, we want to be sure we end the year on a high note.” 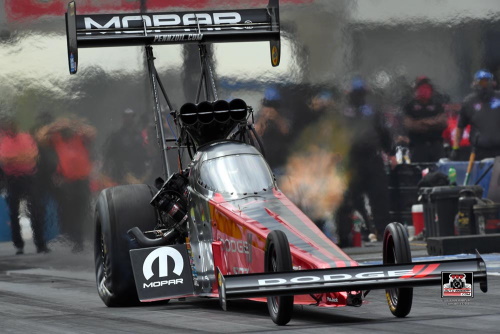 Quotable:
“Hard to believe the final race of the season is here. The key to the kingdom for us has been more runs to get this car dialed-in and getting back to being the quickest on the property. We are so close, and we know that, given our runs in Houston. We left Houston strong which means we are headed into Vegas with full-steam and a tail wind! Bringing home a little gold man, and not the spray painted one you can find on Fremont Street, is the primary focus here. We are unfortunately out of the hunt for the No. 1 spot in the championship, but earning our way to our best championship-finish yet is what I’m looking forward to. Each season that we as a team have contended together we have accented in points, with our eyes on finishing No. 2 this season.” 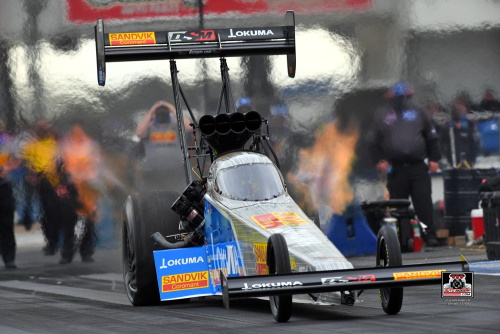 Quotable:
“We’re coming off of an awesome win with a car that just seems to be near-flawless right now. We’re going to a track where I’ve won more races (eight) than anyone else. I can’t wait to see the outcome of the championship. It’s been a crazy year, but it was great to come back out and be able to race at several of these events. I’m proud to represent DSR, Sandvik Coromant, Okuma, Toyota and all of our amazing partners during these trying times.” 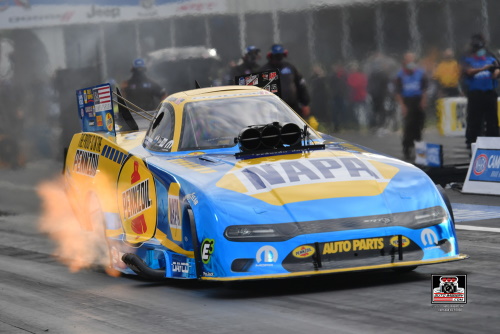 Quotable:
“Well, this is it. It’s hard to believe that we’ve actually gotten to the end of the season and it’s so much fun right now. Sometimes you don’t want the season to end, and the way our NAPA AUTO PARTS team has been running these last couple of races, really since the summer started, we feel like we’ve gotten into our groove so we would’ve loved a couple of more races to catch up in points.

“It’s going to be a little strange to end the season in Vegas, but it’s one of my favorite tracks. It’s become sort of a ‘home track’ for me. So many good people there, longtime friend Chris Bond who’s been taking care of our team for years, first at New York New York, then The Mirage, and now The Sahara, and that’s become our ‘home away from home’ for the race team. We’re really excited to carry the colors of The Sahara on our car this weekend. We’ve got 20+ years friendship with the Palmer Electric family. They do a ton of work at Las Vegas Motor Speedway and also The Strip, and they’ve taken us in like family, and we look forward to spending time with them two times a year. Unfortunately, this year we were only able to get out to Vegas once, so we’re going to enjoy this weekend and try and finish out on a good note. We’ve been running so well right now, and to end with a win and have some time to reflect on it would be great. We’re going to carry the Pennzoil colors with NAPA AUTO PARTS and finish the year strong.” 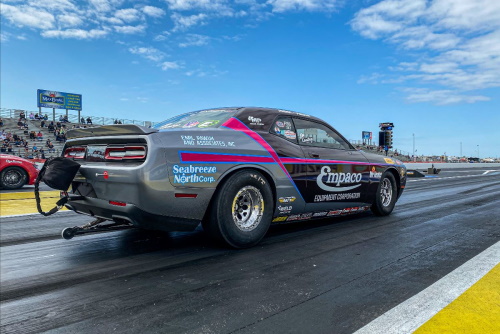 Quotable:
“Well, as we head west for the third week in a row and close out our season in Las Vegas, I’m looking forward to another strong outing by the Empaco Equipment/Ohio CAT/Mr. Heater Dodge Drag Pak team. The finish in the semis in Houston was good, but we want to do better. The last time I raced at The Strip at Las Vegas Motor Speedway was in 2005, and actually my last win as a professional NHRA drag racer was during the 2001 Vegas event when I won in Pro Stock. Would love to get back to the Vegas winner’s circle. Kevin Helms, Terry Snyder, and Kyle Pawuk have done a great job on the car this year. We’ve been running very consistently, and when the driver does his job, we have a chance at going rounds and winning races. We’re coming off of two semifinal finishes from the last two races, and we would like to take it a step further this weekend and finish the year out strong.” 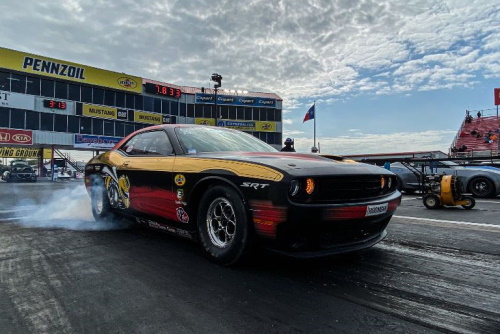 Quotable:
“Can’t say it’s been ‘el Bandito’s’ favorite year so far, to be honest. He’s been trying hard to keep up with Mark Pawuk who’s been doing an awesome job carrying the Mopar flag deep into the rounds this season. We’ve been swapping combos on el Bandito for races trying to get him just right, and just when we thought we narrowed down the difference between the two during Dallas, we ordered up some changes to arrive in time for Houston, and well, turns out the shipping giant had other plans. Our parts arrived late Saturday night after qualifying to the hotel, so we rolled the dice, went into first round of eliminations with a brand-new un-dyno’d setup, and it was a little too saucy to turn on the win light. But el Bandito is finally in the direction we’ve been aching for. So, with one last final race to be had in the 2020 Factory Stock Showdown season, and el Bandito’s last ever entry into NHRA competition, you better bet we’re gonna send it in Vegas!”

ABOUT DON SCHUMACHER RACING
Established in 1998 as a single-car Top Fuel team, Don Schumacher Racing (DSR) has grown to become the winningest organization in NHRA Drag Racing history. Including team owner Don Schumacher’s five NHRA Funny Car titles from the 1970s, DSR’s current win count stands at 356, and DSR is one of a very small handful of teams in the motorsports industry to surpass the 350 milestone. DSR owns 17 world championships in three different NHRA categories.