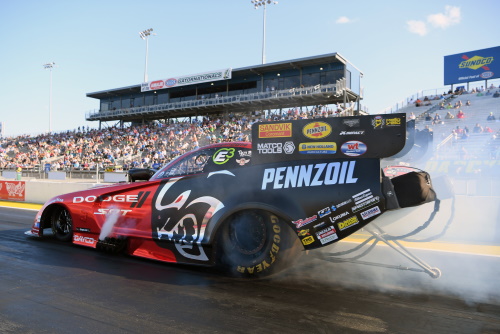 Auburn Hills, Mich. (October 29, 2020) – A Dodge Charger SRT Hellcat from the Don Schumacher Racing (DSR) stable will be crowned the 2020 National Hot Rod Association (NHRA) Drag Racing Series Funny Car World Champion this weekend at the Dodge Finals Presented by Pennzoil. While that is a certainty, there is still heightened anticipation and drama heading into the season finale with much left to be determined on the track at The Strip at Las Vegas Speedway.

First and foremost, intrigue remains heading into the Dodge NHRA Finals regarding which of the four DSR drivers will be crowned Funny Car World Champion as Matt Hagan (842 points), Tommy Johnson Jr. (800 points), Jack Beckman (799 points) and Ron Capps (679 points) sit 1-2-3-4 respectively atop the standings where they jostled for position all season long while dominating the category. With the adoption of a format awarding points-and-a-half for the final event of the season, all four are still mathematically in contention with 183 points up for grabs. However, the focus is sharply on the three-way battle between Hagan, Johnson, and Beckman, as just 43 points separates them.

“I have a lot of confidence in our team, and our car, and what we’re doing,” says Hagan who will run the sinister looking Dodge Charger SRT Hellcat Redeye paint scheme for the final time this season in tribute to the most powerful and fastest mass-produced sedan in the world. “We’ve made up a lot of ground in a little bit of time. We’ve done what we needed to do to put ourselves in this position to have the points lead.”

Having won the Funny Car title in 2011 and 2014, Hagan takes nothing for granted even if he comes into the weekend as the defending winner of the event and with the points advantage.

“I just want to go out there this weekend at the Dodge NHRA Finals Presented by Pennzoil and treat it like a regular race,” adds Hagan. “We want to qualify well and take it one round at a time, and if we can do that, we’ll be successful. We’re 43 points ahead, but with the points-and-a-half deal things can really turn quickly, but I’d rather be leading than following, and that’s where we’re at right now. We’ve got to keep digging, stay focused, and go rounds in Vegas, and if all goes according to plan, I’m looking forward to partying hard Sunday night and celebrating with my team.”

The possibility of an undefeated season looms large for the DSR foursome. They will stage their HEMI®-powered Funny Cars for this weekend’s Dodge NHRA finals having won every national event this year leading up to the season finale with Beckman and Johnson both having earned three Wally trophies, while Hagan and Capps have a pair each. While the season schedule was shortened to 11 national events due to the pandemic, the feat is still worthy of note as it is merely an extension of a streak that began in October of 2019 and has already set the NHRA record for most consecutive wins by a team at 13 national titles, surpassing the previous mark of 10 set by the same lineup of DSR drivers in 2017.

Of this season’s 10 national event wins to date, the DSR teammates have battled head-to-head in the final round on six occasions. Johnson has been involved in four of those six Hellcat versus Hellcat finals, the latest of which was last weekend in Houston at the Mopar Express Lane SpringNationals, which resulted in his third win and a chance to vie for the Funny Car title at the season finale for the first time in his career.

“I’m excited to come into Vegas with a shot at this championship and the team has had a great season,” says Johnson who has finished top-three in points on four occasions, including a runner-up finish in the 2016. “It’s a track where I have had some success and do pretty well at. I’m a round-and-a-half behind Matt (Hagan), and Jack (Beckman) is right on our heels. To see the dominance that the Don Schumacher Funny Cars have had all season is really exciting. I think we are all excited to see if we can’t close out the season and sweep all the races with the DSR Funny Cars.”

Funny Car World Champion in 2012, Beckman finished runner-up last year and came back strong again this season with a category-leading five final round appearances, winning three Wally trophies, two of them against DSR teammates. He hopes to collect some hardware on Sunday as well.

“As long as we win the race and Matt (Hagan)’s car is not in the other lane for the final round, I would consider that as perfect a year to a season as I’ve ever had, so I’m very much looking forward to this.”

Capps first climbed into a Funny Car in 1997 and captured his world championship in 2016. At the conclusion of the 2020 NHRA season he will have finished Top 10 in points for 16 consecutive seasons and earned a Wally from every NHRA drag strip he has raced in his illustrious career. Should he finish out the year in fourth place or better, this year will mark the 14th time he will have a wrapped up a season in the Top 5.

After battling atop the Top Fuel standings all season long, Leah Pruett saw her championship hopes put on hold until next year after a quarterfinal holeshot loss at last weekend’s Mopar Express Lane SpringNationals at Houston Raceway Park. However, Pruett will still be pursuing a win in the finale in order to put her “Demon-possessed” Dodge Charger SRT Hellcat Redeye-themed dragster firmly in the top-three in the Top Fuel standings to improve upon the pair of career-best fourth place finishes posted the last two seasons.

Pruett will also close out the season by also taking the wheel of her Dodge Challenger Mopar Drag Pak in Factory Stock Showdown (FSS) competition alongside her teammate Mark Pawuk.

For Pawuk, while the winner of the FSS championship was determined last weekend at Houston after his semifinal matchup and loss to points leader Aaron Stanfield, he’ll work to secure a runner-up finish in the standings for the Empaco Equipment Mopar Drag Pak with four more rounds of racing left on Sunday.

The 2020 NHRA season will conclude this weekend at the Dodge NHRA Finals in Las Vegas with FS1 television coverage airing on Sunday, Nov. 1, from 4- 7 p.m. ET and featuring live coverage of the final rounds.