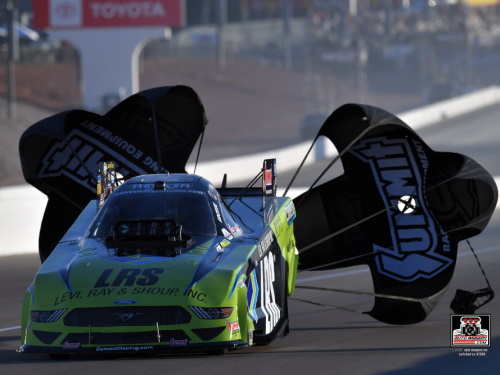 LAS VEGAS (November 1, 2020) – The conclusion of the 2020 season of NHRA’s Camping World Drag Racing Series will take place on Sunday with the Dodge NHRA Finals at The Strip at Las Vegas Motor Speedway. For Tim Wilkerson and his Levi, Ray and Shoup Ford Mustang Funny Car crew, they see a bright opportunity to claim a victory before the tumultuous season is put to rest.

Leaving Texas, where last week’s Houston SpringNationals took place, proved fruitful for the LRS team as they were strong out of the gate in Las Vegas. Wilkerson flew down the dragstrip to a 3.940-second pass at 322.88 mph. His team was elated to see a big move in the right direction, and they came back in the second round with more to give.

“We had a good first run today,” said Wilkerson, who qualified in the No. 8 position. “Believe it or not, the second run was going to be even better.”

“It broke a blower drive. Not the belt, the drive shaft that runs the belt,” explained Wilkerson. “It was on a great run. I thought it burned up a piston and that’s why it died, but we got back and the engine looks brand new. Richard [Hartman, co-crew chief] looked and was like, ‘Figured it out!’ It was just one run too many on that part, but it’s better that it happened today than tomorrow.”

Wilkerson will race No. 9 qualifier J.R. Todd in the first round of eliminations. It will be the third time in the 11 races this season that the two have come up against one another. They’ve traded wins over one another; Wilkerson beat Todd in Pomona at the season-opener, and Todd claimed the win in St. Louis.

Eliminations for the 2020 Dodge NHRA Finals will begin at 10am on Sunday, November 1, at The Strip at Las Vegas Motor Speedway.