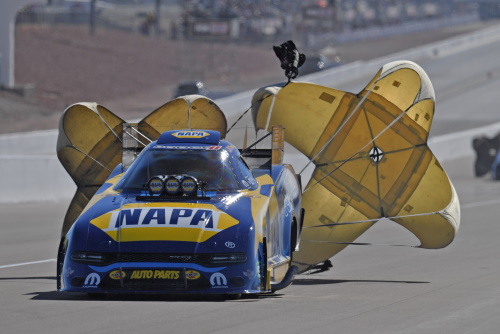 Las Vegas, Nev. (November 1, 2020) – The final qualifying sessions of the 2020 National Hot Rod Association (NHRA) Drag Racing Series season have been completed at the Dodge Finals Presented by Pennzoil with Don Schumacher Racing (DSR) Funny Car pilot Ron Capps taking his Dodge Charger SRT Hellcat to the No. 1 qualifier position. Capps and his DSR teammates, Matt Hagan, Tommy Johnson Jr. and Jack Beckman head into the final eliminations rounds of the season battling for the Funny Car world championship with a points-a-half format to determine the winner among them.

Capps earned his first No.1 qualifier honors of the season, the 25th of his career, in the final session with a 3.902-second elapsed time pass at 327.98 mph to dislodge the provisional pole sitter and the defending race winner Hagan. Capps has taken home five Wally trophies (2001, 2005, 2009, 2011 and 2012) from The Strip at Las Vegas Speedway and will start his quest for another against Chris Morel in the first round.

With the qualifying result Capps added four bonus points to his total which has him fourth in the standings that the four DSR Dodge Funny Car have dominated all season-long with an undefeated streak of 13 national event wins that stretches back to October 2019. 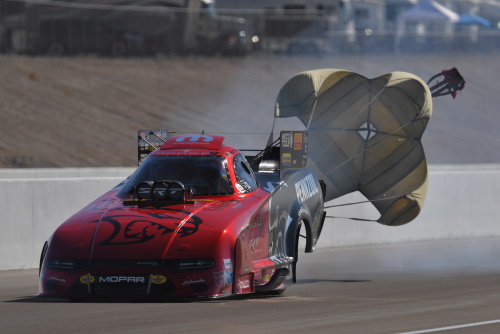 Hagan’s 3.911-second pass at 327.82 mph was enough to keep his Dodge Charger SRT Hellcat Redeye No. 2 on the ladder. Looking to secure his third championship title, the Mopar driver will begin his drive through eliminations with a first round match against Cruz Pedregon.

Should he be successful, the biggest challenge of the day could be a quarterfinal pairing with teammate and fellow championship contender Beckman who qualified tenth and would need to beat Hagan for his own chance to vie for the title. 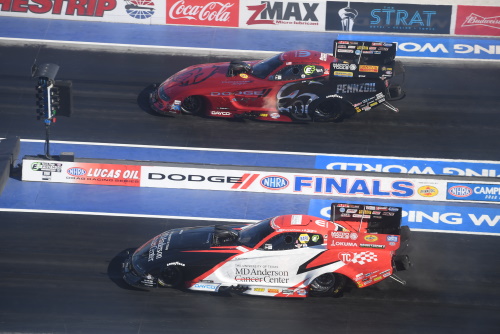 Johnson Jr qualified fourth with a solid 3.915-second pass at 319.14 mph aboard his MD Anderson Dodge Charger SRT Hellcat, earning bonus points in both sessions for posting the fourth and third quickest runs, respectively, and will look to turn on four win lights on Sunday to earn his first Funny Car championship title.

Trailing the points leader by 45 and 52 markers respectively, Johnson and Beckman would both have to finish two rounds ahead of Hagan for a chance to win the Funny Car crown. With both on opposite sides of the ladder, that could also set up an all-DSR Dodge final round showdown for both the national event win and the Funny Car world championship. 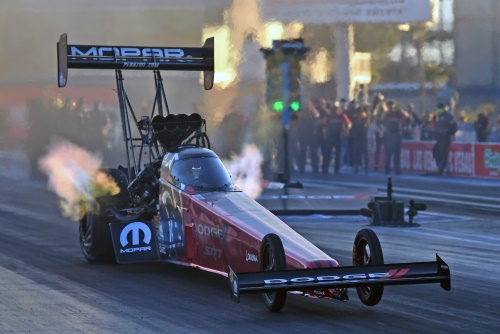 Last year’s No. 1 Top Fuel qualifier at the Fall Vegas event, Leah Pruett set the second quickest run in the first session by driving her “Demon-possessed” Dodge Charger SRT Hellcat Redeye dragster to a 3.791 sec./ 322.04 mph run. That lap was good enough to keep her in the top half of the ladder when her second run didn’t go as planned and will see her line up against Chris Karamesines in the opening round. From her No. 6 position, Leah hopes to make a run for her first event win of the season and boost her back into the top-three in the standings to finish the season in which she was part of the championship conversation until the very end.

Pruett will also close out the season with a No. 3 Factory Stock Showdown starting position for her Dodge Challenger Mopar Drag Pak after setting the second quickest run in the first session and then improving on her second lap with a 7.976 sec./170.00 mph pass. She’ll meet up with Kevin Skinner in the opposite lane for her first run on Sunday.

The 2020 NHRA season concludes at the Dodge NHRA Finals in Las Vegas with FS1 broadcasting the action on Sunday, Nov. 1. Qualifying highlights will air from 2-4 p.m. ET and then eliminations from 4- 7 p.m. ET will feature live coverage of the final rounds. 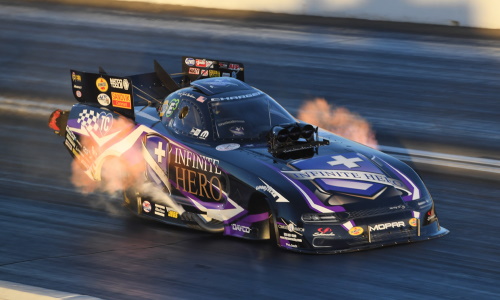 “You can strategize and worry yourself into the ground trying to figure out where you should qualify to be the most advantageous. Sometimes it’s easier to put your blinders on and go up there and try to get data for the car. Low and behold, the ladder turned out exactly the way we needed it. If we go out and win the race we will be the champions. We will get to face Matt Hagan early in eliminations and if they beat us more power to them. And if we beat them we’re going to keep marching on. This is going to be one of the most exciting Sunday’s of my entire career. This is the site where I got my first nitro win back in 2006 and if this is the end of my career this would be the perfect place to close it out.” 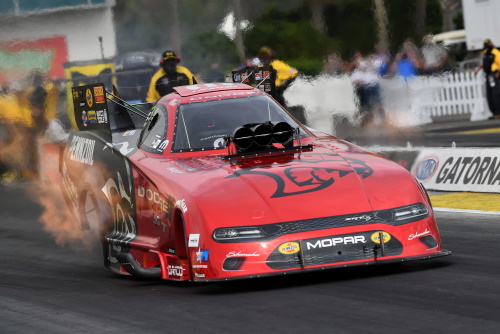 “We ended up No. 2 and made a great first run out here at (Las) Vegas and ended up No. 2. If we get there, we could see (Jack) Beckman second round. We just need everything to fall in place. We have a great opportunity with a great race car and Vegas has been very kind to me. We’ve been lucky. We want to keep that going, but it’s drag racing and you just never know and that’s why the fans buy tickets to see what’s going to happen. This Dodge SRT Redeye Hellcat is hauling the mail and I’m fortunate to be driving it.” 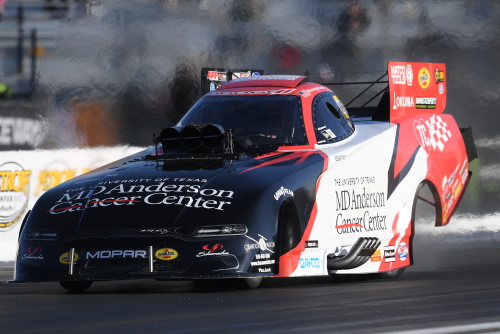 “I’m happy with how qualifying played out. We have a really good, consistent race car and we’re ok for tomorrow to go some rounds. So far, everything is going as planned and we’ll go out tomorrow and see if we can click off four more like we did the last race and see how it all falls after that.” 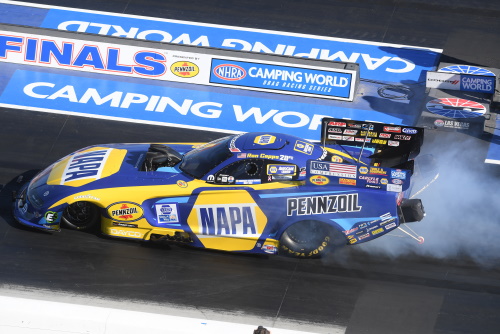 “A great job (Rahn) Tobler, Dustin (Heim) and the guys. We obviously brought this car out under extreme circumstances for the final round in Gainesville and it won, and then we brought it out again in Houston and came close to winning last Sunday. Honestly, we had never warmed the car up until today. Both those final rounds we didn’t get to warm the car up because we were under such pressure and time constraints. Tobler decided to run this car and I kept telling him how much I like this car and I love driving it and my lights are good and it feels right. Low and behold, it went out and made a nice, safe run. We had some DSR parts we wanted to try on the first lap, so we had to back it down a bit and just get down there. And then everything was right to plan with the NAPA Know How we talk about and it went up there and leaned on the tune-up and that number popped up. It probably had more in it, but at the time that’s what he was trying to do. For me, I wanted to get a Camping World hat and obviously a win would be great, but to steal the No. 1 spot at the last race of the year is a big feather in the cap. Now time to do some big stuff tomorrow.” 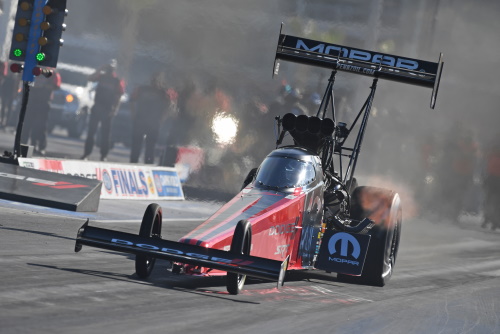 “One of our favorite things to do is race at (Las) Vegas. We have a strong history of qualifying well and going deep into the rounds. We laid down a solid Q1 pass and were excited about the foundation that allowed us to put the coals to it for Q2. Unfortunately, we had about 24 extra seconds on the line idling which drowned more than a gallon of fuel and these cars are very sensitive to weight and I had the front tires in the air much longer than normal and when they came down we smoked the tires. We had it set up to run a high .60, low .70 and go to the No. 1 spot. We can’t change the variables from that Q2 run, but we are ready for a very long Sunday and finish the season in a strong manner.”

“Coming into the last race of the season, we were really looking forward to making some good laps, but unfortunately we couldn’t get the car to hook up either session today. So, the car is going to have to go down the race track tomorrow. We qualified way down in the field and we’ll be running one of the fastest cars in round one. I’m going to do the best I can. I know my crew will be there for me and we’ll tune this Drag Pak Hemi up and try to knock out one of the top qualifiers.”

“The car ran really good on both runs and that puts us deep in the field like we want. We’ve never race El Bandito in (Las) Vegas before. We need some win lights on Sunday and a little gold man. We’ve got the car and the setup for it just like we’ve been preaching all season and it’s finally here. This would be a good way to wrap up this 2020 Factory Stock (Showdown) season. We have a lot of confidence heading into Sunday. We want a strong day in both Factory and Top Fuel and I feel good.”