LAS VEGAS (November 2, 2020) – Don Schumacher Racing driver Matt Hagan was crowned the 2020 NHRA Camping World Funny Car champion on Sunday during the Dodge NHRA Finals presented by Pennzoil at The Strip at Las Vegas Motor Speedway. Behind the wheel of the Dodge Charger SRT Hellcat Redeye, the 37-year-old clinched his third Funny Car title in the semifinals to capture championship No. 18 for DSR, and the sixth Funny Car title for the winningest team in NHRA history.

The 2020 Funny Car championship chase came down to a three-way intramural battle on the final day of the season. Hagan entered race day with a two-round lead over championship contenders and DSR Dodge teammates, Tommy Johnson Jr. and Jack Beckman, who were hot on his heels in pursuit of the 2020 title. Hagan carried a 45-point lead over No. 2-ranked Johnson, and a 52-point lead over No. 3-ranked Beckman. Hagan, the No. 2 qualifier, began his day by clocking low E.T. of round one, defeating Cruz Pedregon with a stout 3.901-second pass versus Pedregon’s 4.034 E.T. Hagan then watched as Beckman suffered a first-round loss, leaving only Johnson with the opportunity to take a shot at swiping the Camping World Series trophy. Both Hagan and Johnson advanced during round two, keeping their championship-hopes alive. In the semifinals, Hagan sat strapped into his Dodge Charger SRT Hellcat Redeye and watched as Johnson was defeated by teammate Ron Capps, officially making Hagan the 2020 Funny Car world champion. 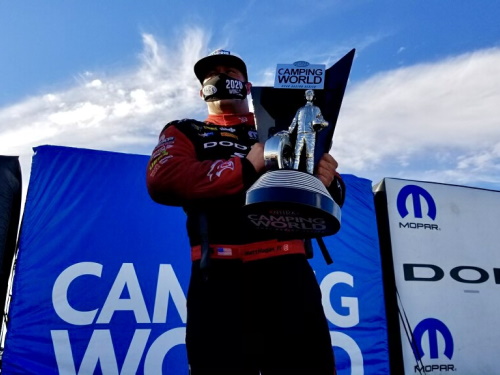 Hagan, a 35-time race winner, didn’t have much time to celebrate his championship, as he had to get ready to run Alexis DeJoria. He rocketed to a 3.915 E.T. to defeat his opponent and earn a bid to his fifth final round of the year.

“It’s been a fight all year long. With COVID, not knowing when we’ll start racing again, where the season will end, it’s just been very challenging, but thank you to Don Schumacher, everyone at Dodge SRT, Mopar and Pennzoil and everyone for sticking by us,” said the newly-crowned champion regarding his third world title (2011, 2014, 2020) in 10 seasons.

“Dodge and the DSR fab shop, they’ve put a great race car underneath us. My crew chief Dickie Venables, I can’t say enough about the guy. He’s won me two world championships (2014, 2020) and we’ve runnered-up a few times. There’s a handful of guys on this team who haven’t won a championship before. I’m just so proud to give them that opportunity and I know how bad everybody wanted it. For us to have won three world championships now in this sport, it’s incredible. It all comes back down to my guys and the car they put under me. It’s not just me. I try not to mess it up. This is one of the most humbling sports I’ve been involved in and it always seems to come down to the last race and that certainly doesn’t make me look any younger. Thank you to everyone who supports what we do and we hope we made you proud to be a part of this.”

The Christiansburg, Va. native, who splits his time between wrangling an 11,000-horsepower Dodge Charger Hellcat and manning his 3,200-acre hemp and cattle farm, is hoping to go wire-to-wire at the Dodge NHRA Nationals by capping off his day with a race win. Hagan will battle it out with Capps, the No. 1 qualifier, in the final as both attempt to pick up the last 2020 Funny Car event trophy for DSR, and ‘sweep the season’ by going undefeated on the year. The all-DSR Funny Car final showdown guarantees the Brownsburg, Ind.-based team’s record streak will increase to 14 consecutive Funny Car victories.

“We’ve still got some unfinished business here. We want to win this race. We’ve got one more round to go, and would love for nothing more than to have a perfect end to the season by winning the Vegas trophy,” said Hagan, who launched DSR’s current 13-race string of Funny Car triumphs at the event in October 2019. 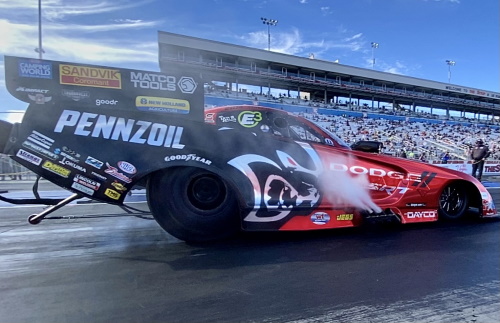 ABOUT DON SCHUMACHER RACING
Established in 1998 as a single-car Top Fuel team, Don Schumacher Racing (DSR) has grown to become the winningest organization in NHRA Drag Racing history. Including team owner Don Schumacher’s five NHRA Funny Car titles from the 1970s, DSR’s current win count stands at 358, and DSR is one of a very small handful of teams in the motorsports industry to surpass the 350 milestone. DSR owns 17 world championships in three different NHRA categories.