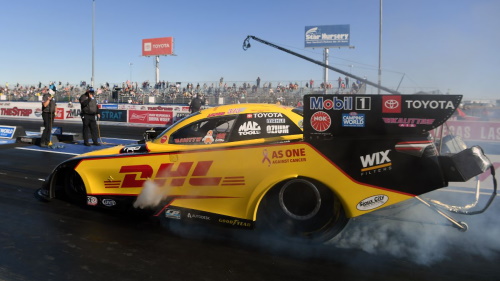 The DHL Toyota Camry Funny Car raced to a quarterfinal finish today at the Las Vegas NHRA Finals at The Strip at Las Vegas Motor Speedway. Driver J.R. Todd will finish the season in sixth place just 16 points out of fifth place. Todd went into race day as the No. 9 qualifier and was facing veteran racer Tim Wilkerson the No. 8 qualifier.

Todd grabbed a starting line advantage and was pulling away off the starting line. Wilkerson caught up to the DHL Toyota Camry but began to haze the tires. He was hanging with Todd and then Todd began spinning his Goodyears as the finish line closed in. Todd and the DHL Camry were able to hold on for the win and a spot in the quarterfinals.

In the second round Todd paired up with the No. 1 qualifier Ron Capps. Once again Todd took the advantage off the stripe but before his DHL Funny Car got to the half-track he had lost a cylinder and he was slowing as Capps was on a smooth run for the win. It was a quick end to Todd’s race and season.

“I was surprised we didn’t run better in the second round,” said Todd. “We dropped a cylinder at the hit and that hurt us. We made a solid run in the first round against Wilkerson. This DHL Toyota Camry was ready to go rounds today. It just didn’t work out. This season was tough for everyone. I am proud of how my guys kept fighting. We got to a couple final rounds but we expect to win. We are going to get right back at it as soon as we get to the shop.”

With two final round finishes Todd stayed at the top of the Funny Car standings throughout most of the season.

Quotable:
J.R. Todd on finishing 2020 season: “This season was tough. We got off to a slow start and then we quit racing for months. Once we got started we found our groove but we just battled to hold onto some consistency. These DHL guys kept working hard it just didn’t work out for us.” 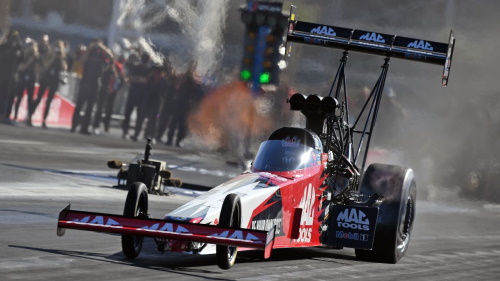 Coming into race day Doug Kalitta and the Mac Tools Top Fuel dragster team knew they needed a near perfect effort and some help from their fellow Top Fuel competitors to secure their first NHRA Camping World Top Fuel world championship. In order to win the championship Kalitta needed to win the race and have the point leader Steve Torrence lose in the first round. It was a longshot but Kalitta was not giving up on his dream.

During Saturday’s qualifying round the Mac Tools Top Fuel dragster was a solid runner and posted the third quickest run of the second session to head into race day as the No. 3 qualifier. There were fourteen Top Fuel dragsters on the property and Kalitta would be racing 2020 Rookie of the Year Justin Ashley for the sixth time this season. He held a 3-2 win advantage to the young driver.

In the first round both dragsters launched side by side and were welded together going down the track. The Mac Tools dragster improved dramatically from their best qualifying effort and posted an impressive 3.733 second run at 322.73 mph. Unfortunately, Ashley was making the quickest run of the event for Top Fuel in the lane beside Kalitta. It was a heartbreaking loss but for the veteran driver he knew he had given it his all.

“I just ran the wrong guy in the first round,” said Kalitta. “It’s just unfortunate. We would have beaten just about everyone else out there. I don’t know what else to say. It’s heart-breaking to go out in the first round at the last race. I know I have a hell of a team here. I’m really proud of my guys and everything we’ve done this year. We’re just going have to suck it up, put this behind us and move on and know that we have a great running car with a great group of guys. We were just unlucky today.”

Kalitta ended the season is second place for the second season in a row and sixth time in his career.

Quotable:
Doug Kalitta on wrapping up the 2020 season: “We were strong all season and we just came up a little short. I am proud of these Mac Tools crew guys as well as all our Mac Tools distributors.” 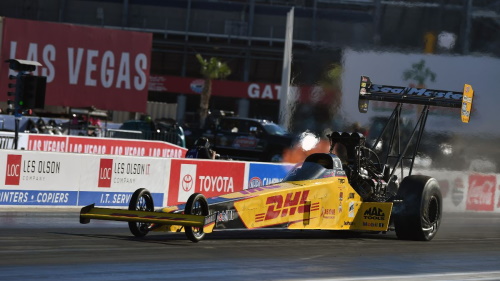 On Sunday of the Las Vegas NHRA Finals at The Strip by Las Vegas Motor Speedway Shawn Langdon and the DHL Kalitta Air Top Fuel dragster made an early exit to wrap up the 2020 NHRA Camping World Drag Racing Series season. The team entered race day as the No. 5 qualifier and were slated to square off with veteran Clay Millican in the first round.

Throughout the season Langdon and his DHL Top Fuel dragster team continued to work to pair a solid qualifying effort with success on race day. Over Labor Day weekend the team married both race days on the way to his second Top Fuel U.S. Nationals win and third of his career. Today he Langdon was looking to make a move up the point standings on the last day of the season.

Conditions were warm with a few clouds helping keep the track temperature under control. Langdon had lane choice and took the preferred right lane. He got the jump off the starting line and his dragster was side by side with Millican as they crossed the half-track marker. As the finish line closed in Langdon’s dragster lost power as the blower belt shredded.

“We lost a blower belt on the run. It would have been close regardless,” said Langdon. “This was a tough way to end the season but we fought until the very end. This DHL team had a lot of success this season winning the U.S. Nationals. We will regroup and get right back at it in the off season. I have to thank Connie for the chance to drive his race car.”

The team will finish the season No.6 in the Camping World Top Fuel point standings.

Quotable:
Langdon on wrapping up season in Las Vegas: “I am glad they were able to have some fans here. I know Chris Powell and his team worked really hard to have a successful race to finish the season. I appreciated having the chance to race once more and I know this DHL team gave it our all this weekend.”