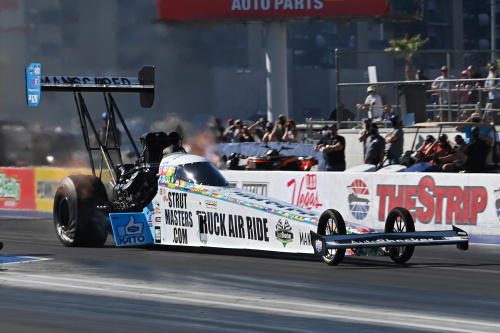 The reflection on the tune up paid off in a first round upset win over Doug Kalitta. Ashley ran low elapsed time of the event 3.700 seconds to get the win and even his win/loss record against the 49-time national event winner at 3-3 for his young career. The win also gave him lane choice over Leah Pruett in the quarterfinals.

The Strutmasters.com Top Fuel dragster continued its dominant performance once again running low elapsed time of the round. Ashley got the jump on the starting line again and never trailed in the drag race. His winning time of 3.777 seconds was just a tick slower than his first round time but the Rookie of the Year was full of confidence headed to another semifinal with one of the quickest race cars on the property.

In the semifinals Ashley paired up with the newly crowned three-time Top Fuel world champion Steve Torrence. This was the third time for Ashley to race Torrence and he was still looking for his first win against the world champ. The Strutmasters.com Top Fuel dragster was again running on rails posting a stout 3.728 second elapsed time but Ashley let Torrence get a starting line advantage and for the first time in his career Ashley lost a race on a hole shot. The young driver took the loss in stride and vowed to take this loss as a learning experience. 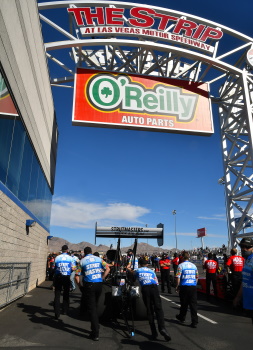 “That’s racing. What am I going to do,” reflected Ashley after the race. “We had a really great race car. I think we had the car to beat. My hat is off to Steve he won the championship today. I do the same thing every time. I see the light and I go and this time it wasn’t good enough. That is on me. We have a great team and what is important right now is to look at the team as a whole. To let this last run stay with you is not the right thing to do.”

At the end of the eleven race season Ashley achieved most of his rookie season goals. He won the NHRA Summernationals. He led the class in reaction time average. He qualified for every national event he entered. He won NHRA Rookie of the Year and he finished solidly in the Top Fuel Top Ten.

“We had a great year. We had a great weekend. We went to another semifinal finish. Our car was running really good and we left with the Rookie of the Year award. Thank you to Davis Motorsports, Chip Lofton at Strutmasters.com, MANSCAPED, Auto Shocker, Kato, Lucas Oil, King Engine Bearings, Justice Brothers, Sanit, Guardlab, Hero Soap Company, Menards and Impact.We have a lot to be thankful for,” added Ashley.