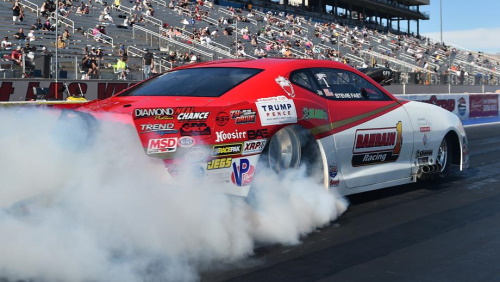 Jackson faced off with Brandon Snider in a thrilling, winner-take-all quarterfinal matchup and he pulled out a dramatic victory with a pass of 5.776-seconds at 248.66 mph in his supercharged Bahrain 1 Racing Camaro. The run edged out Snider’s 5.787 at 246.71 by less than two feet, handing the championship to Jackson for the second consecutive year in exciting fashion.

Jackson went on to finish his season in impressive style, beating teammate and No. 1 qualifier Khalid alBalooshi in the final round with a run of 5.789 at 247.47 to win for the second time this year and 11th time in his career. Jackson dominated a year ago to claim his first world title, clinching the championship before he even reached Las Vegas. It was a much more challenging year in 2020, as six different drivers claimed wins, but it was just as satisfying for the fan favorite.

“When you have a season like this, there’s a lot of team owners that give up on you when you run as bad as we’ve been running,” Jackson said. “You have people that doubt you, but our Bahrain 1 team was never not behind us. I did a decent job of driving today and this means a lot. The first one, I felt was easier, and this one, you had to earn it. That’s the ones that are the most special.”

The race, which was presented by Strutmasters.com, was seventh race in a shortened 2020 season, and Jackson ended it with a strong statement. He qualified fifth and opened eliminations with a victory against Jim Whiteley. The thrilling win against Snider gave him a bye to the final round, where he led from start to finish against alBalooshi to claim the victory.

alBalooshi, a former world champ, reached the final round for the first time this season and eighth time in his career with victories against Chad Green and Justin Bond.