LAS VEGAS (November 2, 2020) – The final race of the 2020 NHRA Camping World Drag Racing Series concluded with a semifinals finish for Greg Anderson and a final round for KB Racing’s Kyle Koretsky. The Pro Stock championship came down to the very last race of the season, the Dodge NHRA Finals, with Jason Line just missing adding a fourth title to his already impressive catalog. 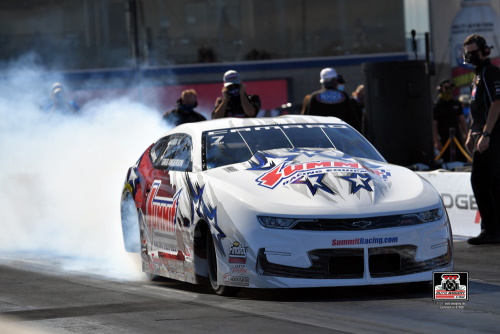 Anderson, competing in the 480th Pro Stock race of his storied career, had the car to beat all weekend long at The Strip at Las Vegas Motor Speedway. The four-time Pro Stock champion claimed the 106th No. 1 qualifier award of his career with an absurdly quick 6.601-second pass. The phenomenal run down one of his very favorite racetracks stood strong through the course of the weekend as the quickest of them all. On raceday in Las Vegas, the driver with more wins than any other Pro Stock competitor brought crushing horsepower to the table every run.

Rookie of the Year contender Koretsky, who qualified No. 3 in his KB Racing-powered Nitro Fish Chevy Camaro, had the only racecar that could have given Anderson’s a challenge. He was second quickest in each of the first three rounds to Anderson’s beast of a machine, and he was driving it like a pro with back-to-back .029-second reaction times in the first and second rounds and an even better .022 in the semifinals. His too-quick -.051 reaction in the final round decided the outcome of the event.

“I’m pretty darn proud of our race team,” said Anderson, who will ride with the No. 4 on his window next year. “Our Summit Racing Equipment Chevrolet Camaros were great, especially these last three or four races. This is the best car I’ve had in a long time. I’m very proud of Kyle, he’s a great kid and a great driver who is only going to get better. You look at this class and the talent within it, and you can’t help but see good things for the future of Pro Stock. I’m looking forward to being part of it for many more years.”

Diverse drag racer Bo Butner is trading out full-time Pro Stock racing for a more a la carte schedule going forward. He isn’t retiring from racing but made his last journey down the racetrack in the KB Racing-equipped Strutmasters/Jim Butner Auto Group Chevrolet Camaro on Sunday in Las Vegas.

“I wish we had a better outcome and a better season, but I’ve been blessed. I’ve won all that a person could ask and then some,” said the 2017 Pro Stock champ. “It’s sad, knowing I’m not going to be week-to-week with the KB Racing team, but we’ll have a relationship forever. As of now, I have nothing scheduled, so we’ll go home and talk it over and figure out some races we want to do. I’m definitely not finished with NHRA drag racing, it’s just at what level we want to participate. You always want to end on a high note, but maybe the outcome today means it’s not over. Who knows?”

Line finished his Pro Stock career No. 2 in the world, and although a first-round loss was disheartening, the 51-time Pro Stock winner was satisfied to turn the page on this chapter of his career. Line will now transition away from the driver’s seat to focus fully on his role in the engine shop and dyno room at KB Racing. The transition will allow the father of two to spend more time with his family.

“There will be a lot of things that I will miss – the fans, the relationships you build with people you get to see out here – but I won’t miss driving the car,” said Line. “It’s been a good ride. Pro Stock is a very humbling class, and despite the times when I’ve come up short or underachieved, I still have no regrets. I’m certainly looking forward to this next chapter.”