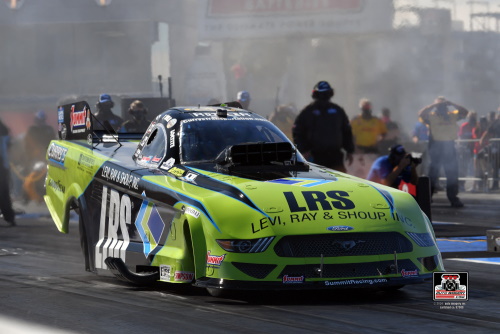 LAS VEGAS (November 2, 2020) – The conclusion of the 2020 NHRA Camping World Drag Racing Series could have come out better for Tim Wilkerson and his Levi, Ray and Shoup Ford Mustang nitro Funny Car team, but no one can say that they didn’t put on one heck of a show on Sunday at the Dodge NHRA Finals. Wilkerson logged out of the season, his 25th behind the wheel of a nitro Funny Car, with a 13th consecutive top 10 finish.

Wilkerson flew down the dragstrip to a 3.940-second pass at 322.88 mph in the first round of qualifying and backed it up with a 3.963 in the second session. Qualified in the No. 8 position, he drew J.R. Todd as a first-round opponent.

It was anyone’s game in their match at The Strip at Las Vegas Motor Speedway, and they were fairly close leaving the starting line. Wilkerson had surged ahead by the time they reached the 330-foot timer, but he then began to smoke the tires. Todd followed suit, and they were both on and off the throttle trying to get to the finish line first.

Just as Todd was approaching the finish line stripe, Wilkerson’s Levi, Ray and Shoup Ford was launched into the lane behind him, and Wilkerson got a face full of parachutes as Todd was unaware of the situation.

“It dropped three holes on the left side when I pedaled it,” said Wilkerson, breathless after the run that had him working the steering wheel without much of a view. “It was pretty interesting; I was just doing my best not to hit J.R. Thank God he didn’t slam on the brakes or anything, or it would have been ugly.

Wilkerson was in a position to win the round until his engine decided to let three of the cylinders go silent.

“I pedaled and got back into it real easy, and I could just see his nose and then he was disappearing,” Wilk explained. “I was like, ‘Oh man, I’m gonna get there.’ I was leaning on it, and then it just goes ‘woosh.’ As soon as it started to turn, I lifted off the gas completely, then his parachutes came out and hit me in the windshield. It hit the car like, ‘clunk clunk’ and I thought, ‘gosh dangit.’ It was ugly. There isn’t much you can do about it after it happens, but I’m just glad we didn’t run into each other.”

Wilkerson had hoped to end the season on a positive note and add another trophy to the 20 he has already claimed in the class, but his focus is now turned to next season.

“We’re going to head home and analyze our part situation, see what we need, then start working on next year,” he said. “I’m excited and grateful for all of the help that we’ve had this year, and hopefully next year we can have some of these great folks on board again and get them to the winner’s circle. We’ve been associated with some great folks for a long time, and I have to thank Dick Levi and everyone at Levi, Ray and Shoup, Jason Curry and everyone at Curry’s Transportation, Summit Racing Equipment, and especially Ford Motor Company. We’re just so pleased to be associated with them, and we really want to make them proud. Next year should be even better.”