Delivering his latest milestone moment in a year chalked full of unforgettable memories, the opening act of the Last Call was sort of like a dream come true for the 29-year old. For as long as he can remember, the Evans, Ga. native has been striving for a big time W at The Dirt Track at Charlotte, and on Wednesday, he finally got it done. 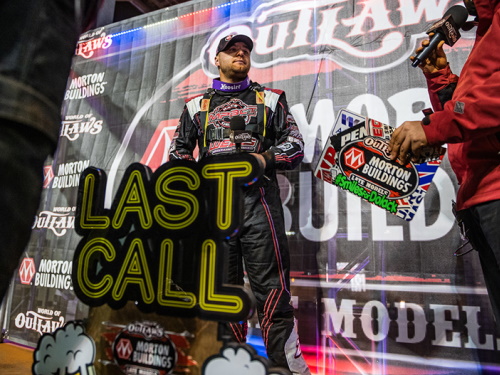 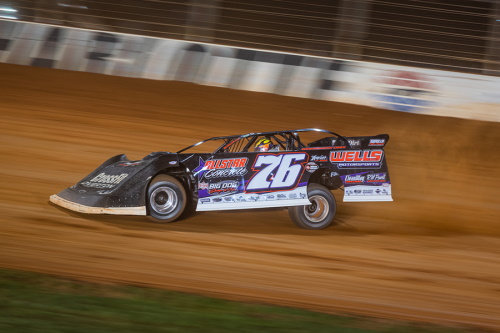 Rolling the dice and selecting the Hoosier D70 option on the right rear, the Wells Motorsports crew went with a harder tire compound and it paid off big. Leading the final 33 laps after passing Kyle Strickler, Big Sexy drove away on every ensuing restart and squashed any potential challenges for the lead with a dominating bid aboard his Crossfit Overton No. 76 Longhorn Chassis.

The win extended Overton’s mark to six series victories on the year and 13 career triumphs with the World of Outlaws Morton Buildings Late Model Series. Overall, he recorded his stunning 25th Dirt Late Model win in his (magic number) 76th start of the season.

“Man, we’ve got one hell of a race car right now,” Overton noted on the prowess of his Wells Motorsports ride. “I appreciate every single one of you up there in those stands. I’ve been coming here since I was a little kid trying to win this thing. I don’t know what to say; I don’t want 2020 to end, well at least the racing part. 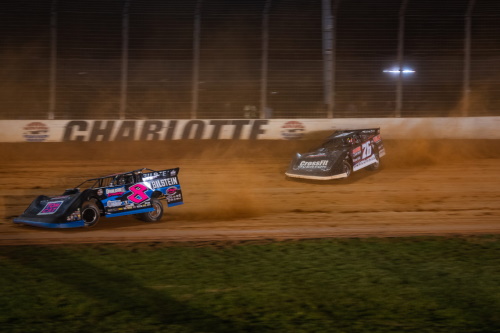 Taking the green flag from eighth, Overton quickly went to fifth off the start as Kyle Strickler outran fellow front row starter, Tim McCreadie, into turn one to grab the early lead. While Strickler built a steady lead over T-Mac and Josh Richards, it appeared as if the High Side Tickler was sitting pretty, and he was until Overton turned up the heat.

Rocketing from fourth-to-second in two laps, Overton disposed of Richards and McCreadie with ease and reeled in Strickler even faster than that. Setting him up for a lap traffic pick, Overton squeezed underneath Strickler’s No. 8 Longhorn Chassis and edged him by .006 seconds to command the 18th lap of the 50-lapper.

As others fell through the cracks, Overton rose to the occasion with an untouchable race car at his power. His car excelled at the mid-point of the 50-lapper, recorded his three fastest times on laps 23-24-26 and leaving no room for any potential challenges. In the end, Overton’s No. 76 crossed the line ahead by 2.736-seconds to claim the $12,000 prize and his sixth World of Outlaws win this year.

“I’ve got the best car owners, and they believe in me,” Overton spoke on his confidence level. “This is a great car, we’ve got great sponsors, I’ve got an amazing family, my fiancé, everyone that keeps me digging. My little brother plus everyone here Steve, Kent, Mitch, Big Dave, Eric… What an amazing year, man.” 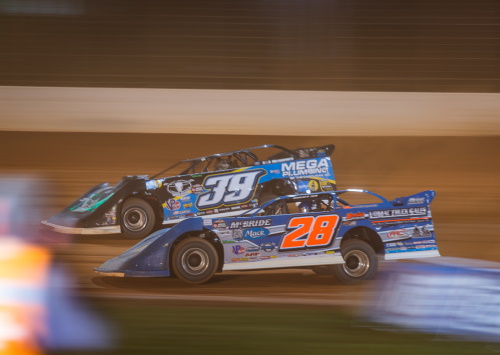 Chasing Overton to the line – as he did exactly two months ago on Sept. 4 at Lavonia – was Dennis Erb Jr. of Carpentersville, Ill. in second-place. Coming to P2 from ninth, Wednesday’s run was a pivotal point in the swing of championship standings as The One Man Band catapulted from sixth-to-fourth with one more night to accrue more points.

“We had a real good car, especially around the bottom there,” Erb said on the podium. “I went a little softer on tires and it hurt me there at the end, but it also helped us get there to begin with. We’re trying to get up there and gain some points, so hopefully we can run well again tomorrow.”

Finishing third in the first of two Last Call features, Tim McCreadie of Watertown, N.Y. extended an impressive, yet hard to beleive streak. T-Mac is now up to 13 top five finishes at The Dirt Track at Charlotte, but owns zero wins to his credit with The Most Powerful Late Models on the Planet at the 4/10th-mile oval.

“I shouldn’t be allowed to pick these tires, that’s two weeks in a row I’ve been wrong,” McCreadie exclaimed on his tire selection. “We got flat beat by two guys that had different rubber on; that’s kind of mind numbing a little bit. Hats off to Brandon and them, it takes a big move to make that decision as hard as a step that tire is.” 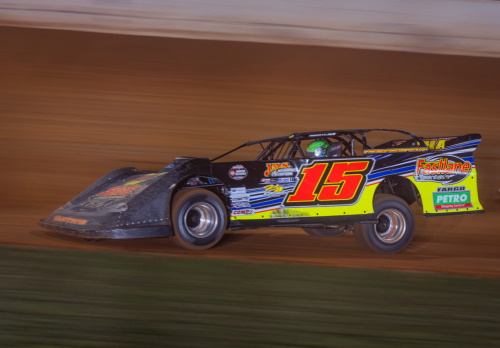 Two of the biggest storylines of the night came in the form of Sprint Car aces, Donny Schatz and Kyle Larson. Both are pulling double duty this week with four consecutive nights of World of Outlaws Morton Buildings Late Models (Wednesday-Thursday) and World of Outlaws NOS Energy Drink Sprint Cars (Friday-Saturday) at Last Call.

Larson, in his World of Outlaws Late Model debut, set social media on fire when he clocked a 14.305 in qualifying to give him and his K&L Rumley No. 6 a NEW TRACK RECORD at The Dirt Track at Charlotte.

Schatz kept the momentum rolling when he hustled from tenth-to-fourth in the 50-lap feature, marking just his second top five finish with the series in 22 career starts. The Fargo, N.D. native aims for a podium appearance tomorrow in his own Rocket Chassis No. 15 before turning focus to the Tony Stewart Racing No. 15 with his 11th World of Outlaws Sprint Cartitle on the line.

Closing out the top five in Wednesday’s feature was Brandon Sheppard, who officially clinched his third title in the last four years of World of Outlaws competition with Rocket1 Racing.

Rounding out the top ten was Jonathan Davenport in sixth, Dale McDowell in seventh, Cade Dillard in eighth, Rick Eckert in ninth, and Ricky Weiss in tenth. Boom Briggs was Wednesday’s hard charger with a 15-spot gain from 27th-to-12th.

The 2020 season for the World of Outlaws Morton Buildings Late Model Series concludes tomorrow, Thursday, November 5. Tickets and pit passes are sold out for the season-ending Last Call at The Dirt Track at Charlotte, but fans can still watch all the action with a DIRTVision Fast Pass. 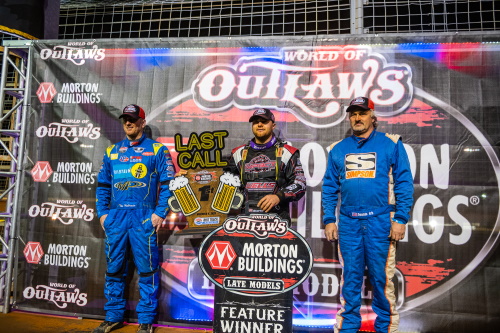