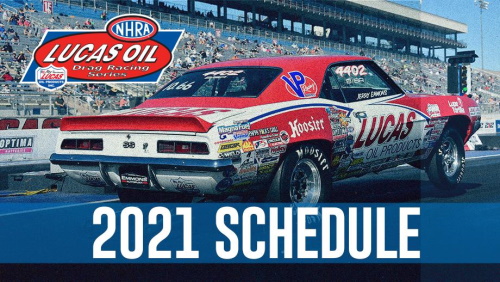 GLENDORA, Calif. (November 6, 2020) – The NHRA Lucas Oil Drag Racing Series, where NHRA’s top Sportsman competitors battle one another for national, regional, and divisional championships, will celebrate its 20th year during the 2021 race season as it competes at premier racing facilities across the country.

The 2021 season kicks off at Orlando Speed World Dragway in Orlando on Feb. 4-6 and concludes at The Strip at Las Vegas Motor Speedway on Nov. 4-7. During the year, the series will also feature a number of popular and exciting doubleheader events, including races at National Trail Raceway in Columbus, Ohio; Texas Motorplex in Dallas; Heartland Motorsports Park in Topeka; Yellowstone Dragstrip in Acton, Mont.; Sonoma Raceway in Northern California and Mission Raceway, Mission, BC, CAN.

As part of the 70th anniversary of NHRA Drag Racing, the NHRA also plans to stream NHRA Lucas Oil Drag Racing Series events on NHRA.TV. These events will be available complimentary with a NHRA membership, and each member will also be able to stream multiple devices simultaneously. In all, NHRA.TV plans to stream more than 20 NHRA Sportsman events during the 2021 campaign.

The upcoming 2021 NHRA Lucas Oil Drag Racing Series schedule includes 44 total events with at least six races in each of the seven divisions. Additionally, there will be 25 regional events featuring the 260-mph Top Alcohol Dragster and Top Alcohol Funny Car classes next season.

“We are thrilled to see the great competition in the NHRA Lucas Oil Drag Racing Series continue for a 20th year in 2021 and we know it will be another action-packed season featuring so many great drivers competing across the country,” said NHRA President Glen Cromwell. “The support the Lucas family has shown to the NHRA and its Sportsman racers has been incredible and it’s exciting to see that partnership continue.”

“Sportsman competitors are a huge part of the success of NHRA Drag Racing and we are pleased to extend our support of the series for a 20th season,” said Morgan Lucas, president of Lucas Oil. “We are very much looking forward to what will be another terrific season.”

The thrilling JEGS SPORTSnationals event, which has been an annual staple of the NHRA Lucas Oil Drag Racing Series, will return to National Trail Raceway as part of the doubleheader weekend and takes place July 15-16. The SPORTSnationals features high-level racing in eight NHRA Lucas Oil Drag Racing Series categories as drivers collect national-level points while competing for their share of more than $100,000 in prize money.

Also, the JEGS Allstars will take place during the prestigious NHRA U.S. Nationals, Sept. 1-5 at Lucas Oil Raceway at Indianapolis for the second straight year, adding another thrilling aspect to the biggest racing weekend of the year. Each season, the JEGS Allstars competition crowns champs in 10 categories, and an overall team champion. A highlight of each year and featuring the top sportsman drivers in the sport, the event features a total purse of more than $150,000.

“Having the JEGS Allstars take place at the NHRA U.S. Nationals was a huge success in 2020 and we couldn’t be more excited to have it return in 2021,” said Scott “Woody” Woodruff, JEGS Director of Media & Motorsports. “It gave these racers a huge spotlight and they made the most of it. We’re also excited to have the JEGS SPORTSnationals be part of a doubleheader weekend at our home track. It worked out perfectly last year and it will be even bigger in 2021.”

Headquartered in Corona, Calif., Lucas Oil Products was founded in 1989 by Forrest and Charlotte Lucas. Through innovative product research and development, along with aggressive marketing programs, Lucas Oil has established itself as one of the fastest-growing lubrication product lines in the consumer automotive aftermarket. The Lucas Oil product line features engine oils, greases, gear lubes and problem-solving additives for everyday cars and trucks. In addition, Lucas Oil continues to be directly involved in the American racing industry at all levels through multiple vehicle sponsorships and racing events.

More information on Lucas Oil Products can be found by visiting www.LucasOil.com.