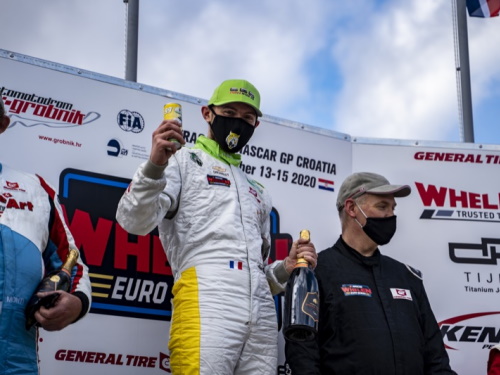 (November 13, 2020) – The Club Challenge were the first EuroNASCAR drivers to hit the track in Grobnik, Croatia, on Friday for the second round of the 2020 NWES regularity challenge. In the end it was reigning Club Challenge champion Alain Mosqueron who stood on the highest step of the podium at the end of three 30-minute sessions and celebrated with his DF1 Racing team.

The Frenchman collected a total penalty time of only 1,494 seconds across two timed sessions and took his revenge on Not Only Motorsport’s Federico Monti, the driver who beat him last time out in Zolder. Monty had only 0,078 seconds more than Mosqueron added to his penalty score, a proof that the battle for the title will go down to the very last event in Valencia, Spain. Marko Stipp Motorsport’s Gordon Barnes from the UK scored his second consecutive podium finish in his Club Challenge rookies season.

“I wanted to take my revenge from Zolder, because Federico was very consistent there,” said Mosqueron after his first Club Challenge win of the season. “I really wanted to win here at Automotodrom Grobnik. As it was a new track for all of us we had to discover it first before clocking some good laps. The track is very fast and I really liked it from the beginning. There are some bumps and fast corners, you have to be very careful there. I was able to be consistent and fast during the timed session and I’m happy to be back in Victory Lane. I thank my team for the good car, it was a very good day for all of us at DF1 Racing.”

Thomas Blumberger ended up fourth driving the #22 DF1 Racing Chevrolet Camaro. The NWES rookies hit the track in the powerful and raw V8 beast for the first time in his career and made solid progress at the challenging 18-turns, 4.168-kilometer long track.

While the Club Challenge will be back in action at Circuit Ricardo Tormo in Valencia on December 3-6, the EuroNASCAR PRO and EuroNASCAR 2 Rounds 5 & 6 are next at Automotodrom Grobnik on Saturday and Sunday. All four races will be broadcasted live on EuroNASCAR’s YouTube channel, Facebook page and Twitch profile as well as on Motorsport.tv and Kreator TV. 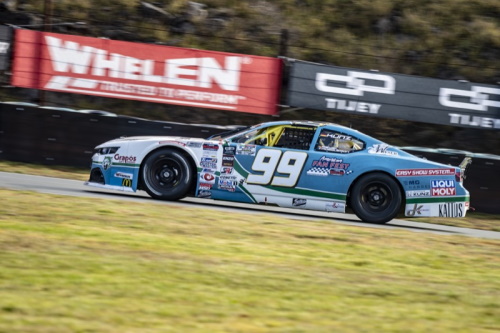