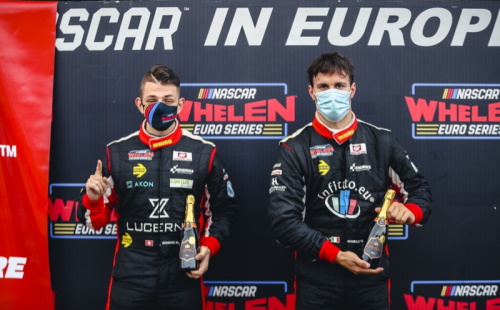 (November 14, 2020) –  The first ever NASCAR Whelen Euro Series Pole Awards for the NASCAR GP Croatia have been awarded! Hendriks Motorsport’s Giorgio Maggi grabbed his first ever EuroNASCAR PRO Pole Position at Automotodrom Grobnik with a 1:29.754-lap and also topped the Junior Trophy standings. His teammate Vittorio Ghirelli ended up first in the EuroNASCAR 2 Qualifying and collected his first ever NWES Pole Award.

It was a challenging ride for Maggi at the wheel of the #18 Ford Mustang as the conditions were changing rapidly during the 30-minute Qualifying. With many drivers waiting as long as possible for the track to fully dry, the Swiss managed to find the best line completing 11 laps. As the drivers only can use one set of General Tire tires during a race weekend, those 11 laps may play a crucial role.

“It was super hard because of the changing conditions,” said Maggi. “I had two lockups during my best lap. I hope this will not cause a problem in the race but I’m super happy with the result. Thanks to the whole Hendriks Motorsport team, they did a great job finding the right balance in the car today.”

2019 runner-up Stienes Longin ended up second 0.116 shy of the pole sitter. The Belgian clocked the 4.168-kilometer track in 1:29.870 minutes in the closing stages of a frantic session at the wheel of his #11 ProJob PK Carsport Chevrolet Camaro. He has 8 laps on his tires before Round 5 of the EuroNASCAR PRO championship. With 9 laps on the track, DF1 Racing’s Nicolo Rocca followed in third 0.177 seconds behind Maggi.

Reigning EuroNASCAR 2 champion Lasse Soerensen finished fourth but had to drive 15 laps around the track, while NWES champion Loris Hezemans rounded out the top-5 with a 1:30.000. The Dutchman had little track time due to technical issues throughout Free Practice on Friday and spent only 7 laps on track in Qualifying on his #50 Hendriks Motorsport Mustang.

Vittorio Ghirelli confirmed his strong performance from Friday’s Free Practice and won his first ever EuroNASCAR 2 Pole Award. The Italian clocked a 1:28.722-lap during the shortened 30-min session. At the wheel of his #18 Ford Mustang, Ghirelli was 0.856 seconds faster than his teammate Tobias Dauenhauer, who will share the first starting line in EuroNASCAR 2 Round 5 on Saturday. Ghirelli did 5 laps on his set of tires, top rookie Dauenhauer only 2. The two are separated by just 2 points at the top of the championship standings.

“I did a really good lap here today,” said Ghirelli. “The whole Hendriks Motorsport crew did a fantastic job today. I thank my team, sponsors and of course my family for this opportunity and I’m really happy about scoring my first ever NWES Pole Position. Now we have to keep up the good work for the races.”

Julia Landauer was the fastest Lady Trophy driver in seventh. The PK Carsport driver finished ahead of Martin Doubek, Massimilian Lanza and Francesco Garisto. Marko Stipp Motorsport’s Evgeny Sokolovsky topped the Legend Trophy standings in 13th place. The session was shortened with 10 minutes to go after crashes by Lanza and Arianna Casoli.

Due to ongoing track repairs, the start of EuroNASCAR 2 Round 5 will be delayed. Further updates will be issued on the NWES social media profiles. All races will be broadcasted live on EuroNASCAR’s YouTube channel, Facebook page and Twitch profile as well as on Motorsport.tv and Kreator TV. 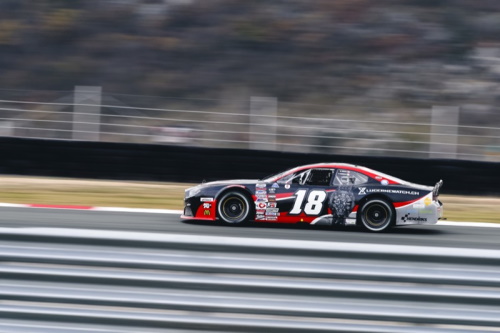 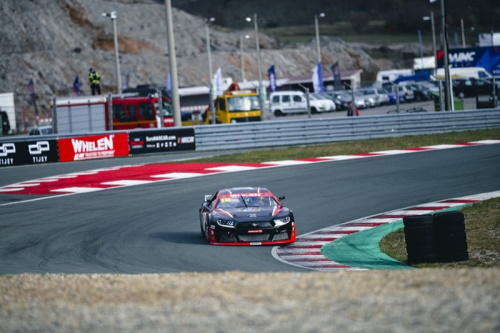