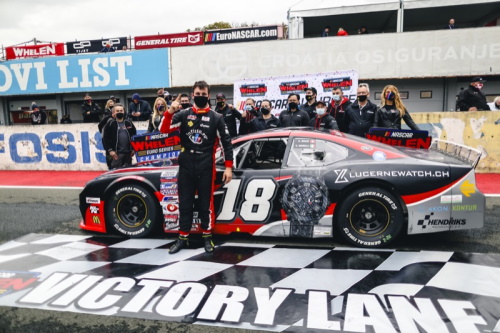 (November 14, 2020) – Vittorio Ghirelli won the first ever NASCAR race at Automotodrom Grobnik on the Croatian Riviera. The Italian started from Pole Position, led all 14 laps of an exciting and thrilling EuroNASCAR 2 Round 5 and consolidated his points lead. Constantly under pressure, the Hendriks Motorsport managed to build a safe margin on his teammate Tobias Dauenhauer, who ended up second crossing the finish line 1.854 of a second behind the Rome native.

It was Ghirelli’s second NWES career win after he was in Victory Lane at Raceway Venray in 2019, but his first victory with the Dutch powerhouse Hendriks Motorsport. “We have a good pace this weekend and we were up front in all sessions so far,” said the 26-year-old. “I thank my team Hendriks Motorsport, all my sponsors and my family. I hope we can keep it up for tomorrow. It was a good battle with my teammate Tobias, but I kept the rhythm and was able to be first under the checkered flag.”

Dauenhauer won the race in the Junior Trophy standings and scored his third podium finish in the 2020 EuroNASCAR 2 Championship. The battle for third was a true nailbiter involving five cars: CAAL Racing’s Dylan Derdaele was holding onto the lowest step of the podium in a duel with Solaris Motorsport’s Nicholas Risitano, but the Belgian made a small mistake that forced him off the track and let Risitano past. In the end, the Italian finished third ahead of Zolder double winner Martin Doubek, who also got past Derdaele.

While the Belgian closed the top-5 and finished second in the Rookie Trophy, Alessandro Brigatti ended up sixth. At the wheel of the #11 PK Carsport Chevrolet Camaro, Lady Trophy winner Julia Landauer followed in seventh ahead of Simon Pilate, who completed the podium of newcomers in the official European NASCAR Series. Francesco Garisto was ninth and Giovanni Trione rounded out the top-10. Mirco Schultis topped the standings in the Legend Trophy classification in eleventh.

Evgeny Sokolovsky was twelfth ahead of NWES debutant Frank Riedel and Igor Romanov. Vladimiros Tziortzis was right in the battle for the last spot on the podium, but also went off track during the race. The Cypriot had to retire and was therefore only ranked 15th in the first ever EuroNASCAR 2 race at Grobnik.

While the EuroNASCAR 2 Championship will be back in action on Sunday, the EuroNASCAR PRO will hit the track for the first time on Saturday at 15:15 CET. All races will be broadcasted live on EuroNASCAR’s YouTube channel, Facebook page and Twitch profile as well as on Motorsport.tv and Kreator TV. 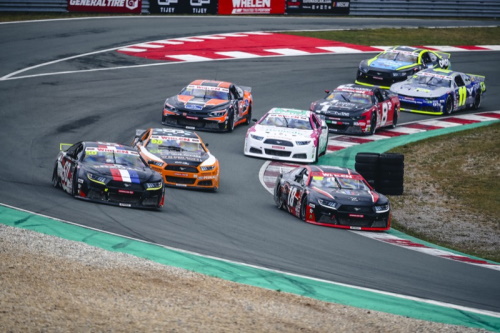 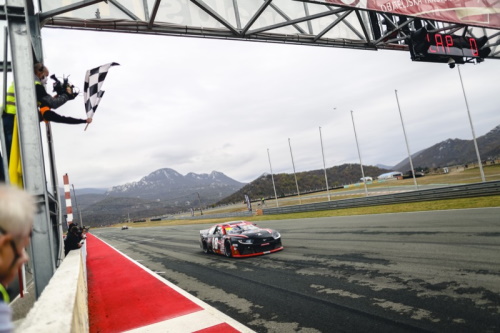