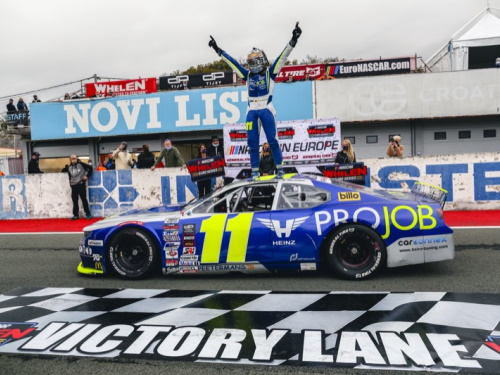 (November 14, 2020) –  EuroNASCAR PRO Round 5 at Grobnik, Croatia was a classic “pure racing” battle, with three drivers battling for the win until the very last second of the 17-lap race. In the end, it was PK Carsport’s Stienes Longin who captured the checkered flag in EuroNASCAR PRO for the second time in his NASCAR Whelen Euro Series career.

The Belgian took the lead at the start and fended off all the attacks by polesitter Giorgio Maggi, who came home second and got his first podium finish in EuroNASCAR PRO together with the Junior Trophy win. Reigning EuroNASCAR 2 Champion Lasse Soerensen finished third – and second in the Junior Trophy classification – just a few tenths of a second behind the top two.

When Longin timed his start perfectly from second on the grid, Maggi had to settle in second. In the early stages the driver of the #11 ProJob Chevrolet Camaro was able to build a small gap, but Maggi gradually caught back and in the closing laps, Maggi was right on Longin’s bumper but couldn’t find a way past the Belgian, who was perfect in closing all the doors.

“I’m very excited for the win here today,” said Longin. “I won the first time in EuroNASCAR PRO last year at Circuit Zolder and when you know how to win, it gets easier. Grobnik is a fast and fun track and it’s nice to be in Croatia. It was a nice battle with Giorgio but I know it’s hard to pass here. I hope it will rain tomorrow as I’m strong in those difficult conditions. I thank my PK Carsport team for the great work today and everyone supporting us.”

Soerensen was also involved in the fierce battle for the win, but the Dane was not able to make a move on Maggi driver and Longin. After several attempts to pass the Hendriks Motorsport driver, the Dane and his #66 DF1 Racing Chevrolet Camaro crossed the finish line in third and grabbed second place in the Junior Trophy classification.

Another tremendous battle took place right behind the top-3: in the end it was reigning champion Loris Hezemans finished fourth. The Dutchman had an intense duel with Nicolo Rocca in the opening laps, but the Italian was shuffled back down the order. Afterwards Hezemans had to defend his position against two-time NWES champion Alon Day, who fought his way up to fifth from ninth on the grid.

During his charge towards the top-5, Day passed Martin Doubek. The Czech had to let the Israeli go but secured a solid sixth place for Hendriks Motorsport and completed the Junior Trophy podium. Marc Goossens followed in seventh ahead of Justin Kunz, Lucas Lasserre and Rocca, who rounded out the top-10. Davide Dallara won the race in the Challenger Trophy in eleventh place.

Gianmarco Ercoli ended up twelfth at the wheel of the #70 Mishumotors car. His #54 CAAL Racing was damaged in the EuroNASCAR 2 Qualifying and Mishumotors team owner Mirco Schultis immediately offered him to pilot his Camaro. Due to him switching cars, Ercoli had to start from the very back of the grid.

The Italian, who was third in points ahead of the NASCAR GP Croatia said: “I’m really happy to have the chance to limit damage and thankful for this opportunity Mishumotors gave us. We will work hard to make the car even more competitive for the race tomorrow.”

Day is leading the championship with 174 points in his pockets. Soerensen is second 8 points shy of the Israeli followed by Ercoli – the Italian collected the 4 bonus points for the most passes in the race – with 160 markers on his account. Longin sits in fourth (159 points) ahead of Hezemans (154 points) after EuroNASCAR PRO Round 5.

The NASCAR Whelen Euro Series will be back in action on Sunday with two more rounds of pure racing. The EuroNASCAR 2 race will go green at 10:30 CET, while the EuroNASCAR PRO Round 6 will start at 14:15 CET. All races will be broadcasted live on EuroNASCAR’s YouTube channel, Facebook page and Twitch profile as well as on Motorsport.tv and Kreator TV. 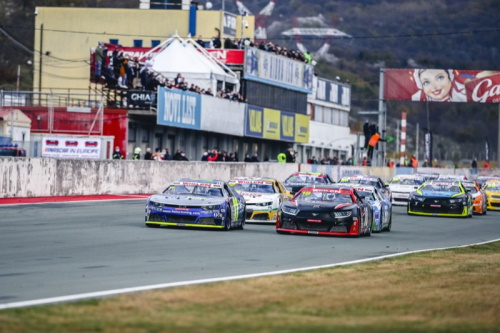 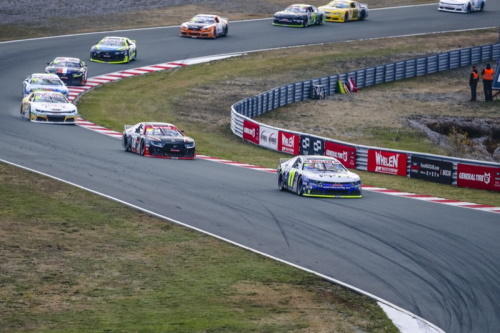