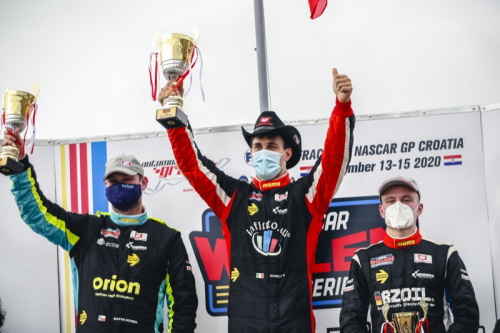 (November 15, 2020) –  Another win for the Dutch powerhouse Hendriks Motorsport at Automotodrom Grobnik: Vittorio Ghirelli won his second consecutive race at the 4,168-kilometer track on the Croatian Riviera and swept the race weekend. The Italian led all 14 laps of an exciting EuroNASCAR 2 Round 6 with a lot of door-to-door battles and pure racing. Ghirelli also extended his championship lead.

The race started behind the safety car to allow the driver to familiarize with the damp track and all cars mounted General Tire wet control tyres. Ghirelli drove away as soon as the green flag dropped and crossed the finish line 8,594 seconds ahead of second place Martin Doubek. 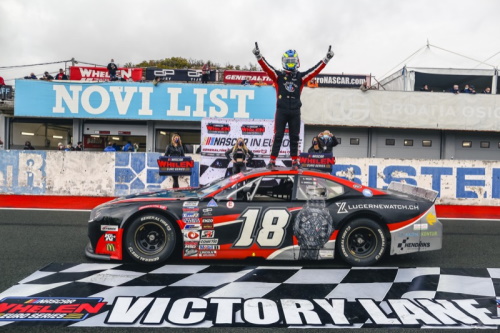 “The conditions were not easy, it was slippery and wet!”, said Ghirelli, who scored his third NWES career win. “Thanks to the team Hendriks Motorsport for such a great car. I tried to get the maximum out of it every lap. I also thank my supporters and my family. I was very confident in the car today and I’m happy about leading the championship ahead of Valencia.”

Doubek was on a mission: The Czech started fourth and immediately put a lot of pressure on Feed Vict Racing’s Alessandro Brigatti. On lap 6, Doubek managed to pass the young Italian with a fantastic manoeuvre at the wheel of his #7 Hendriks Motorsport Ford Mustang. On lap 7 he also got past Nicholas Risitano and then delivered another pass on lap 9 for second place. Doubek finished second ahead of Ghirelli’s teammate Tobias Dauenhauer.

Dauenhauer had to settle for third after he was passed by Doubek in the battle for second. The Vallelunga double winner rounded out the overall podium, won the race in the Rookie Trophy and collected important points for the title race that will culminate in the double event at Circuit Ricardo Tormo in Valencia, Spain. He also completed a 1-2-3 finish for Hendriks Motorsport.

Francesco Garisto was fourth under the checkered flag but he received a 10-second penalty at the end of the race for overtaking outside the track limits. The Marko Stipp Motorsport driver fell back to eighth, while Vladimiros Tziortzis, who was second in the Rookie Trophy, inherited fourth place. The Cypriot at the wheel of the #1 Alex Caffi Motorsport / Race Art Technology Mustang and Garisto had a spectacular duel in the closing laps of the race.

CAAL Racing’s Dylan Derdaele ended up fifth after a solid race and completed the Rookie Trophy podium. Julia Landauer was sixth and won the Lady Trophy ahead of Arianna Casoli – the Italian jumped into the #88 car after Saturday’s crash in the #54. Landauer beat Feed Vict Racing’s Simon Pilate to the line.

Brigatti finished ninth after a contact with Risitano during the battle for third. After Doubek got past Risitano, the Italian got slightly off track. Brigatti was not able to avoid contact and crashed into the back of the #12 Solaris Motorsport Camaro. Both cars were damaged and both drivers were thrown down the order. Risitano got off track a second time on lap 9 and closed the top-10 in the end.

While Giovanni Trione finished eleventh, Marko Stipp Motorsport’s Evgeny Sokolovsky won the race in the Legend Trophy by finishing twelfth under the checkered flag. The Ukranian was joined on the Podium by Mirco Schultis, who was penalized for a starting procedure infringement, and Frank Riedel.

After EuroNASCAR 2 Round 6, Ghirelli leads the overall standings with 213 points in his pockets. His teammate Dauenhauer follows in second with a 13-point gap from the leader. Brigatti sits in third with 189 points on his account.

The EuroNASCAR 2 championship will return to action for the 2020 NASCAR Whelen Euro Series double header at Circuit Ricardo Tormo in Valencia, Spain. All races will be broadcasted live on EuroNASCAR’s YouTube channel, Facebook page and Twitch profile as well as on Motorsport.tv and Kreator TV. 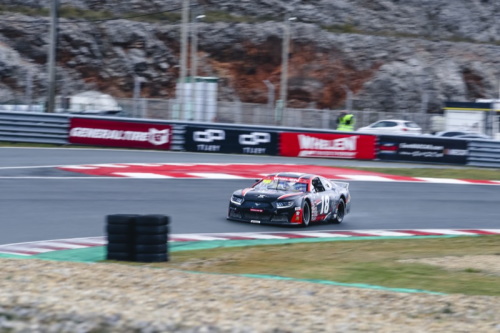