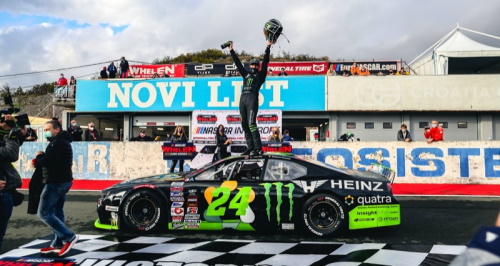 (November 15, 2020) –  With his victory at Automotodrom Grobnik in Croatia, two-time champion Alon Day tied Ander Vilarino’s all-time record of 22 NWES career wins. The PK Carsport driver led all 17 laps in a thrilling EuroNASCAR PRO Round 6 and extended his championship lead ahead of the Valencia double header. The Monster Energy driver has now amassed 214 points – 15 more than second-placed Lasse Soerensen.

Day had a perfect start and pulled away from the rest of the field in the opening laps. Reigning NWES champion Loris Hezemans followed in second on his #50 Hendriks Motorsport Mustang with PK Carsport’s Stienes Longin right behind him.

On lap 7, Lucas Lasserre’s #33 Camaro stopped on the main straight after a driveshaft failure, triggering a caution that brought the field back together. When the safety car pulled back into the pits with 8 laps to go, Day made another brilliant restart and took the lead ahead of Hezemans. Once again, the Israeli opened a gap on his chasers to conquer his 22nd NASCAR Whelen Euro Series race win. With the 40 points going to the winner, he also extended his championship lead and kept the red Whelen banner on the windshield of the #24 Camaro. 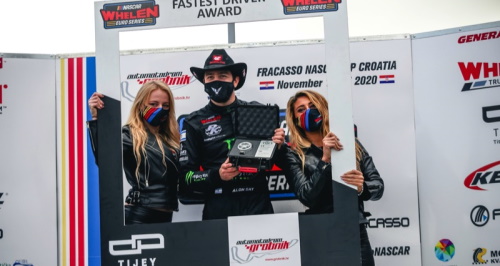 “It’s an amazing feeling”, said Day, who grabbed the pole position by posting the fastest lap in the first EuroNASCAR PRO race at Automotodrom Grobnik. “The PK Carsport team put so much work into the #24 Monster Energy Chevrolet Camaro. Unfortunately Qualifying didn’t work out yesterday but we made the best out of the situation. I’m tied with Ander for the all-time record and that is something I’m really happy about.”

After having some technical issues on Friday and Saturday, Hezemans was back on the podium in EuroNASCAR PRO. The Dutchman never surrendered his second place and scored important points on his way to defend the title he won in 2019. The Hendriks Motorsport driver is now 25 points behind Day.

The battle for third offered some amazing door-to-door action and pure racing: Longin was holding on to the last spot on the podium until lap 11, when the Belgian was passed by his former teammate Nicolo Rocca. Longin then came under pressure from Soerensen and in an attempt to get the position back from Rocca, he ended up off track and lost several positions. The contact between the two led to a 30 seconds penalty for Rocca, who crossed the finish line third but was demoted to 13th in the final results.

Soerensen finished third and won the Junior Trophy ahead of a strong Marc Goossens at the wheel of the #98 CAAL Racing Ford Mustang. Gianmarco Ercoli started twelfth – once again the Italian drove the #70 Mishumotors car – and fought his way up the ranks to fifth overall and second in the Junior Trophy. The Italian was able to salvage the weekend after his #54 Camaro was heavily damaged in EuroNASCAR 2 Qualifying. He’s now 18 points shy of Day in the overall standings.

DF1 Racing’s Justin Kunz had a solid run in Croatia and finished sixth. The performance lifted him to the final spot of the Junior Trophy podium. Simon Pilate impressed with a strong EuroNASCAR PRO debut in seventh ahead of Longin and Mauro Trione, who won the race in the Challenger Trophy. Trione was joined by Davide Dallara and Evgeny Sokolovsky on the podium of the special classification for bronze and silver drivers.

After scoring the first ever 1-2-3 finish in the history of NWES in the EuroNASCAR 2 race, Hendriks Motorsport saw two of its drivers making contact on the track. After Giorgio Maggi and Martin Doubek got together both drivers had to retire early in the race when they were running inside the top-10. Croatian motorsport icon Nico Pulic had to park his #1 Alex Caffi Motorsport / Race Art Technology Mustang on the side of the track after a contact.

After EuroNASCAR PRO Round 6, Day leads the overall standings with 214 points on his account. Soerensen (200 points) sits in second ahead of Ercoli (196 points), Hezemans (189 points) and Longin (188 points). The battle for the championship is on with only 4 races left in the 2020 NASCAR Whelen Euro Series season, the last two of which will award double points.

The EuroNASCAR PRO Championship will be back in action on December 3-6 at Circuit Ricardo Tormo in Valencia, Spain. All races will be broadcasted live on EuroNASCAR’s YouTube channel, Facebook page and Twitch profile as well as on Motorsport.tv. 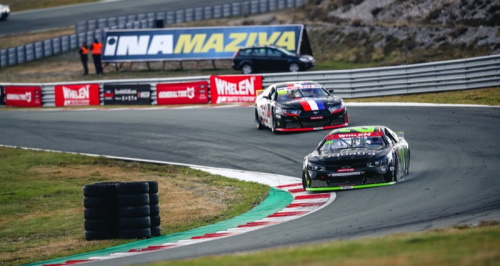 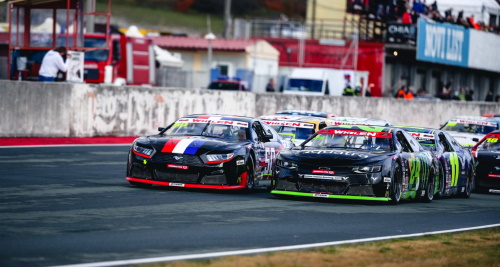 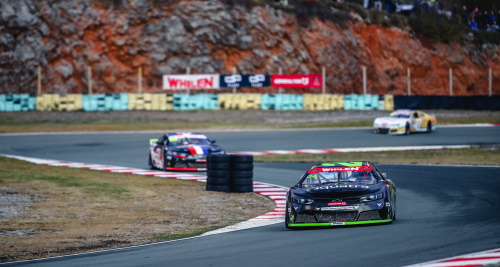