NWES 2021 SCHEDULE
2021 NWES Calendar revealed: NASCAR road course racing at its best!
14 Rounds at seven of the most iconic road courses in Europe 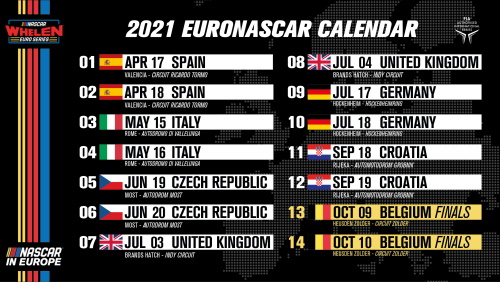 (November 21, 2020) –  The 2021 NASCAR Whelen Euro Series calendar has been unveiled and it will delight all European NASCAR fans! Kicking off in Valencia on April 17-18, the 2021 EuroNASCAR PRO and EuroNASCAR 2 championships will feature a total of 28 races of exciting door-to-door NASCAR racing in seven different countries at some of the most iconic European tracks.

“We are very proud of this 2021 calendar which visits some of the best circuits in Europe and offers a great diversity of layouts for our teams and drivers to showcase their skills!” declared NWES president CEO Jerome Galpin. “With all our track partners, we hope to come back to a normal sanitary situation and to be able to organize great American festivals to welcome thousands of fans sharing our passion for pure racing and American culture. We are strongly determined to continue to offer one of the best racing shows in Europe on and around the track!” 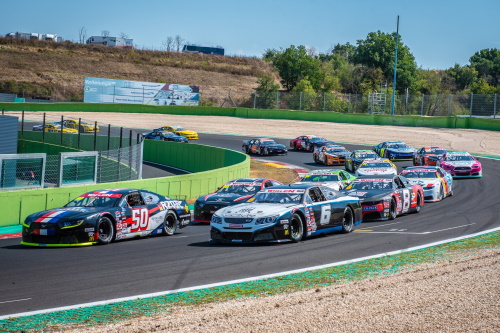 The NASCAR Whelen Euro Series showcases 2 different championships: EuroNASCAR PRO is dedicated to professional and high profile drivers, while the EuroNASCAR 2 is restricted to young and amateur drivers. Both EuroNASCAR PRO and EuroNASCAR 2 drivers share the same car but score points in their own championship. Each division will run two races at each of the 7 events for a total of 28 races over the season.

The 2021 season will begin on April 17-18 with the traditional opening rounds in Valencia, Spain. The Valencia NASCAR Fest at the Circuit Ricardo Tormo will celebrate its eight edition. On May 15-16, Italy and the fascinating 4-km long Autodromo di Vallelunga will host the second event of the season with the second American Festival of Rome. One month later on June 19-20, NWES will return to the Czech Republic to tackle the 4,212 km of the sweeping Autodrom Most in the context of the second edition of the Autodrom Most NASCAR Show.

The season will reach its midway point on July 3-4 with a unique celebration at the historic Brands Hatch, UK Indy Circuit with the hugely popular American SpeedFest. The iconic 1,9-km Indy Circuit will host the British NASCAR GP for the eighth time. Germany’s legendary Hockenheimring will then host the penultimate round of the NWES regular season on July 17-18. The fast German track will determine how the points standings will look like entering the summer break.

EuroNASCAR will then return to action on September 18-19 by visiting the Croatian Riviera and Automotodrom Grobnik, located in Rijeka, for the second time after a successful first edition in 2020.