LAS VEGAS (November 26, 2020) —While one of the most challenging yet, the COMP Cams Street Car Super Nationals 16 Presented by FuelTech provided a much-needed weekend of grassroots drag racing at The Strip at Las Vegas Motor Speedway. With COVID-19 restrictions heavy due to the pandemic surging through America since March, fans and racers did their parts to ensure they were masked and socially distanced throughout the event in accordance to state directives. 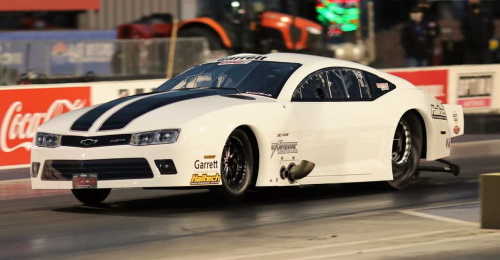 “We cannot thank everyone enough for this weekend,” said Mel Roth, Street Car Super Nationals promoter. “A lot of people didn’t think we were going to pull it off and there were a couple times where it was close. But we want to thank the elected officials of Nevada for working with us to allow a limited number of spectators to watch in person.

“I don’t know what the future holds, but being able to bring a little bit of normalcy to the drag racing world for a weekend felt good.” 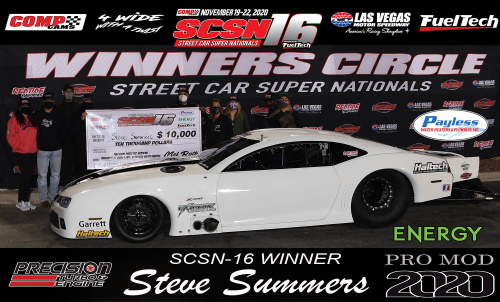 In Pro Mod, Steve Summers’ 5.628-second lap at 264.39 mph topped runner-up Sean Renteria pass of 7.994 seconds at 119.04 mph. The car count in Pro Mod was hit the hardest, due almost entirely in part to COVID restrictions in Canada preventing the dozens of racers from north of the border who traditionally attend from racing. Although Canada couldn’t be represented on the track, they were still present at the event, with “O Canada” being played prior to eliminations, as is custom.

SCSN 15 Pro Mod finalists, Aaron Wells (who won the event) and Randy Merrick, had both planned to attend this season. However, Wells made a last-minute decision to stay home due to COVID concerns and Merrick’s car wasn’t ready after a recent rebuild.

“We had an amazing Pro Mod field,” Roth said. “Ed Thornton, the Shootout winner from Thursday, just blistered the track and Steve Summers had an incredible weekend. The Pro Mods always get a lot of attention and even though we didn’t see our usual car count in that class, they still put on a show.”

It was a family affair in Mustang Maddness Sunday with dad Chris Holbrook taking the finals win light over his son, Kyle Holbrook.

Need Merch?: Need to grab the gear but couldn’t make it to the race? No worries! Order your SCSN 16 merch by clicking HERE! We sold out of many items at the event, but we are restocking & everything will be available online!

About the Premier Street Car Association:
In its 21st season, the Premier Street Car Association, based near Denver, has been a staple of doorslammer drag racing since its inception. With six heads-up classes, four bracket classes, and two index classes, the PSCA provides some of the best racing in the country for both fans and racers. The PSCA season is capped off by its Street Car Super Nationals at The Strip at Las Vegas Motor Speedway, now in its 16th year.