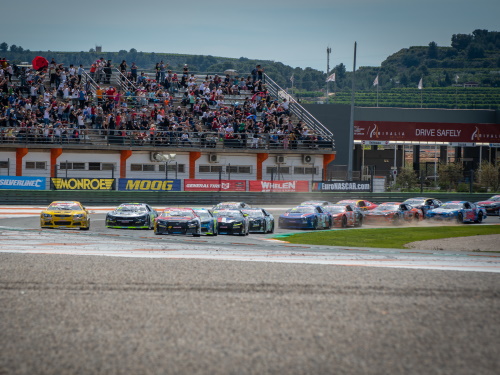 (November 26, 2020) –  The 2020 NASCAR Whelen Euro Series season will culminate in the first week of december with a unique Super Speedweek of NASCAR road course racing at the Circuit Ricardo Tormo in Valencia, Spain.

With the Valencia Super Speedweek, for the first time in the history of NASCAR in Europe, two back-to-back NWES events – the NASCAR GP Spain and the EuroNASCAR Finals – will take place at the same track, delivering four days of non-stop action. The EuroNASCAR competitors’ strengths will be tested with a completely new challenge. The NASCAR GP Spain will take place on December 3-4 and the double-points awarding EuroNASCAR Finals will take center stage on December 5-6.

“We are delighted to offer our competitors and our fans this unique new challenge with two events and four consecutive days of NASCAR action at the Circuit Ricardo Tormo. With our fantastic track partner in Valencia and our competitors we are ready to crown the 2020 champions and we look forward to a week of racing that will reward the best of the best,” said NWES President – CEO Jerome Galpin. “We will offer an extensive live coverage from Spain and we are sure fans will love the Super Speedweek!”

Champions and Trophy winners will be crowned at the end of the Valencia Super Speedweek. Fans from all over the world will be able to watch all races live on the EuroNASCAR’s YouTube channel, Facebook page and Twitch profile as well as on Motorsport.tv.

On December 3-4, the first leg of the Super Speedweek – the NASCAR GP Spain – will assign the regularity-based Club Challenge title on Thursday morning, while the EuroNASCAR PRO and EuroNASCAR 2 championships will hit the track for the first time with two practice sessions and an afternoon Qualifying session.

Tension will ramp up on Saturday at 13:00 CET when EuroNASCAR PRO and EuroNASCAR 2 Qualifying will kick off the EuroNASCAR Finals. Double points will be on the line later at 16:15 CET in the first EuroNASCAR 2 Finals round and on Sunday, December 6, when three races will decide who will wear the NASCAR Whelen Euro Series championship ring.

The EuroNASCAR 2 champion will be crowned with the Final 2 race at 9:00 CET and the NWES title will be on the line in the last EuroNASCAR PRO races of the season at 13:00 CET and 16:15 CET.