Pataskala, Ohio (December 2, 2020) – Meyer Shank Racing (MSR) has finalized its 2021 IMSA WeatherTech SportsCar Championship lineup and is pleased to announce that Juan Pablo Montoya has signed with the team to compete in the IMSA Michelin Endurance Cup rounds in the No. 60 MSR Acura ARX-05 Prototype.

Having been part of the development of the Acura ARX-05 prior to its 2018 debut, Montoya brings a wealth of experience and knowledge of the Prototype platform to MSR. 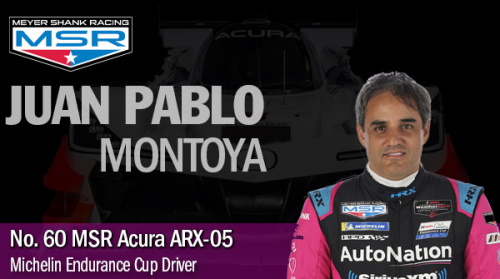 “I’m really excited to be joining Meyer Shank Racing next year,” said Montoya. “I’ve always seen Mike (Shank) around the track and we had a really simple, straight forward conversation to get this deal put together for next year.”

In addition to his speed and experience, Montoya also brings some added chemistry to the team as he rejoins his former co-driver, Cameron, onboard the Acura ARX-05. Having raced the last three races seasons together, Montoya and Cameron have collected three victories and nine podium finishes. The strong effort saw the pair claim the 2019 IMSA Team, Driver and Manufacturer championships.

“Dane and I have a really great relationship that has also turned into a friendship,” continued Montoya. “We both really understand each other and know what we need from each other to be competitive. I’m looking forward to continuing the relationship with him. I’m also looking forward to driving with Olivier and AJ. I know AJ from back when I ran NASCAR and we banged wheels more than once!”

With the Rolex 24 At Daytona set for January 30-31, Montoya is hoping to help MSR capture its second overall Rolex 24 victory.

“I’ve won at Daytona several times, but we have yet to score a victory with the Acura,” said Montoya. “It would be great to get that first victory and I know that with the lineup that Mike has put together we’re capable of doing that.”