Two eight-hour races—one on Saturday and a second on Sunday— along with test sessions will provide competitors with 24-hours of track time in preparation for the double header enduro race weekend.

Having just completed the IMSA Michelin Pilot Challenge at Sebring in November, the COTA outing marks the first race at the Texas track for Stoner Car Care Racing since 2017.

Rob Ecklin Jr., Ramin Abdolvahabi Steven Davison will return to the No. 99 Stoner Car Care Aston Martin Vantage GT4 following the IMSA Michelin Pilot Challenge season finale at Sebring International Raceway. The driving duo have a history of success at the 3.426-mile course. Abdolvahabi scoring a top-ten finish at his last visit to COTA during the 2016 Continental Tire Sports Car Championship. Ecklin brings a fifth place finish as well as a top-ten finish behind the wheel of the Aston Martin GT4. 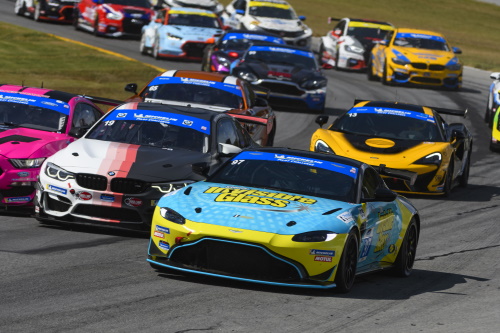 The sister team entry will be a car packed with youth, speed, and experience as the father-son combo of Mark and Nolan Siegel along with Tom Dyer join the team for the first time, sharing the No. 09 Invisible Glass Aston Martin Vantage GT4 for the endurance weekend.

Mark Siegel is no stranger to the Stoner Car Care Racing team as a competitor in the IMSA Michelin Pilot Challenge, having recently contested a growing schedule with CarBahn with Peregrine Racing on board an Audi R8.

The younger Siegel is an up-and-coming racer in the Cooper Tires USF2000 Championship, and claimed two podium finishes on his way to 13th in the 2020 standings. Siegel will return to the Texas course having raced in the F4 US Championship in 2019 where he earned two top-10 finishes.

The 16-year-old looks forward to the opportunity to gain experience behind the wheel of the No. 09 Invisible Glass Aston Martin. 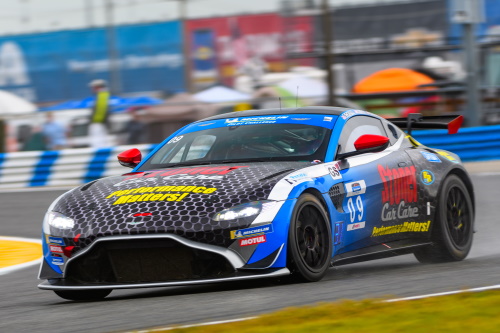 “We were looking for more seat time, and my dad has been racing against the Stoner Car Care drivers all season in the IMSA Michelin Pilot Challenge, so he knows those guys,” said Siegel. “This will be my first time driving in a sports car race – obviously, I’ve been to many races with my dad, so I’m excited to get behind the wheel of the Aston Martin and get experience in this car. It will be the first time for me to race with a roof over my head, and my first time competing in an endurance race! It’s a very cool car to race. I’m going to get as close as I can to Tom (Dyer) over the weekend. He’s super experienced. I haven’t been to COTA since the race last year, so it will be a fun weekend.”

The two eight-hour races on Saturday, December 5th and Sunday, December 6th will close out Stoner Car Care Racing’s year following seven outings in IMPC competition including a podium finish at Sebring International Raceway in the TCR class with Ben Waddell at the helm of the No. 47 Stoner Car Care Hyundai Veloster N TCR.

The team will switch gears to the 2021 season at Daytona International Speedway for the Roar Before the 24 on January 22-24.