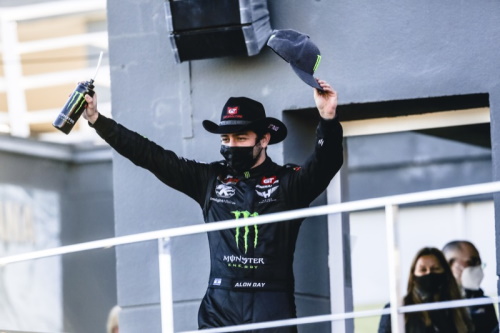 (December 5, 2020) –  It was a memorable day for Alon Day at Circuit Ricardo Tormo in Valencia, Spain. The Israeli scored his 23rd NASCAR Whelen Euro Series career win to break Ander Vilarino’s all-time record and become the winningest driver in EuroNASCAR history. Even more important for him, the PK Carsport driver extended his EuroNASCAR PRO championship lead ahead of the Finals in Spain.

Day started from pole position but lost the lead right in the first few turns to his teammate Stienes Longin. The two had an intense and clean battle for several laps. Day took his opportunity on lap 11 to grab the lead and build a gap on the Belgian’s #11 Chevrolet Camaro. At the end of the 18-lap EuroNASCAR PRO Round 8, Day was first under the checkered flag by 1.262 seconds.

“Two more to go”, said Day, who was pleased with the fair battle against his teammate. “I’m so happy, especially after the small hit we got yesterday to our aircraft. I have a great team and a great teammate. I’m happy we kept it clean and we held all the other drivers behind us. It’s a great achievement for PK Carsport to score this 1-2 finish. Now it’s just two more to go!” 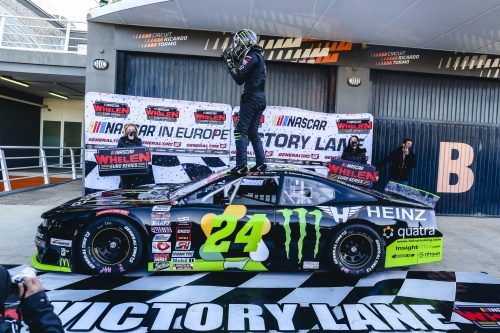 Longin had a solid pace in the closing stages of the race and cruised to a second place ahead of reigning NWES champion Loris Hezemans, who completed the podium. The #50 Hendriks Motorsport team was the most successful squad in the NASCAR GP Spain at the Circuit Ricardo Tormo, but to defend the title, the Dutchman will have to give all his best in the final two double-points races of the 2020 NWES season.

DF1 Racing’s Nicolo Rocca started eighth and fought his way up the ranks to fourth place with a solid performance. Gianmarco Ercoli, who won the race in the Junior Trophy, rounded out the top-5. Day’s closest chaser Lasse Soerensen was sixth after his phenomenal win on Friday. The Dane also won the Tijey Fastest Driver Award, a beautiful titanium ring made by the Italian jewelry manufacturer, and ended up second in the Junior Trophy classification.

Marc Goossens followed in seventh ahead of Thomas Ferrando, who was on the lowest step of the Junior Trophy podium in his return to the EuroNASCAR PRO grid after skipping NASCAR GP Croatia. Lucas Lasserre was ninth ahead of Francesco Sini. Dario Caso grabbed the win in the Challenger Trophy classification in twelfth ahead of Yevgen Sokolovskiy and Mauro Trione. 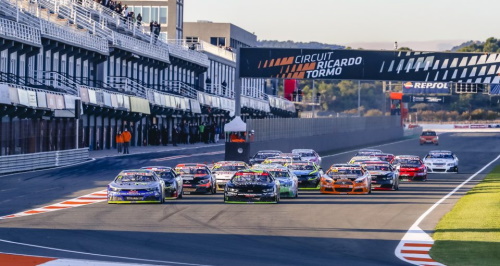 Yesterday’s Challenger Trophy winner Davide Dallara had to retire on lap 6 due technical issues with his Not Only Motorsport Mustang. Ander Vilarino was fighting for spots inside the top-10 in the first half of the race, but was also forced to park his #48 DF1 Racing – Stipp Motorsport Chevrolet. Trione was shuffled down the order at the beginning of the race after a contact with the #99 Chevrolet in the hands of Justin Kunz, who finished 14th.

Day now leads the championship with a 14-point margin on Soerensen in second. The NASCAR Whelen Euro Series championship will be on the line in the EuroNASCAR Finals with two thrilling double-points races.

Round 8 closed the 2020 NASCAR GP Spain but the EuroNASCAR Finals will start just a few hours later: The EuroNASCAR PRO and EuroNASCAR 2 Qualifying will take place at 12:40 pm CET followed by EuroNASCAR 2 Final 1 at 3:55 pm CET. All sessions will be broadcasted live on EuroNASCAR’s social media profiles on YouTube channel, Facebook page and Twitch profile as well as on Motorsport.tv and Kreator TV. 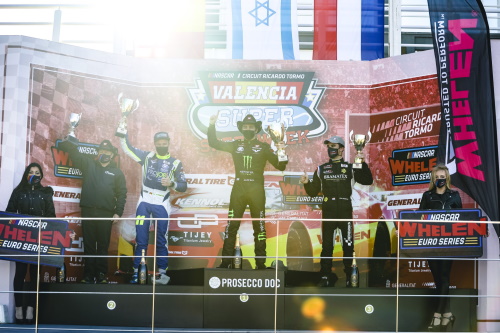 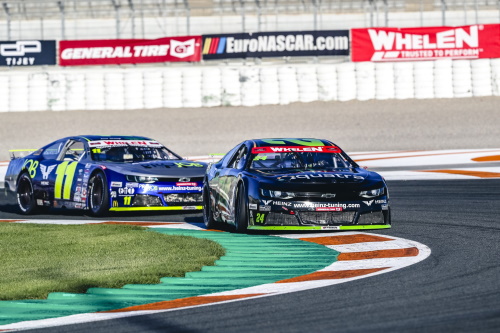 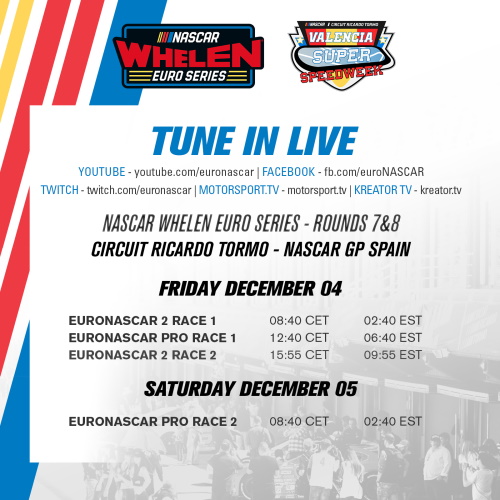 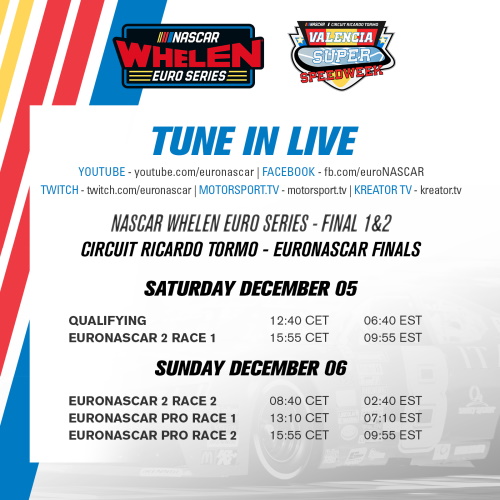