(December 9, 2020) – Mazda has reaffirmed its commitment to the Mazda MX-5 Cup presented by BFGoodrich® Tires series by once again increasing the size of its championship prizes. As the series prepares to run under the IMSA banner for the first time starting in 2021, Mazda has taken the initiative to make MX-5 Cup more inviting than ever for drivers and teams by expanding championship prize offerings. 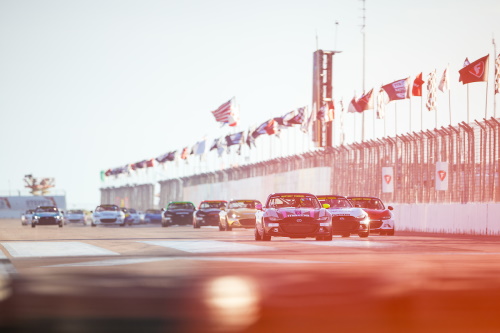 With Mazda having a well-established record of supporting racers from the grassroots level all the way to IMSA’s top DPi class, the 2021 season will mark yet another chapter of that commitment.

All together Mazda will award more than $560,000 in year-end prizes, including a $250,000 payout for the 2021 Champion. The prize package will also see the championship podium finishers earn significant payouts, as the runner up driver will earn $85,000, while the third-place points earner will emerge with $50,000 at the end of the 2021 season. 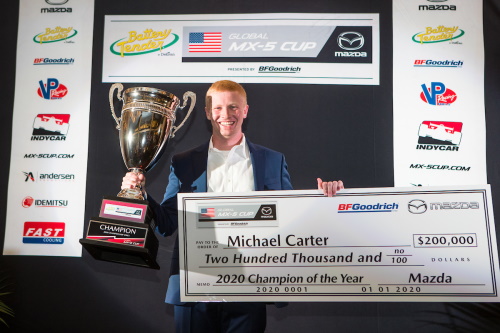 In addition to the $50,000 increase of funding that will be awarded to the Champion, Mazda will also pay prize money to the top 10 finishers in the championship points, which doubles the number of drivers taking home checks at the end of the season.

“Everyone at Mazda is looking forward to the next chapter in the Mazda MX-5 Cup with IMSA,” said Mazda Motorsports director Nelson Cosgrove. “We feel that it is some of the best door-to-door racing in the world! Our hope is to reward this amazing competition with a new and updated Championship and Rookie of the Year prize package. The Daytona kickoff is right around the corner and we cannot wait to get things started.” 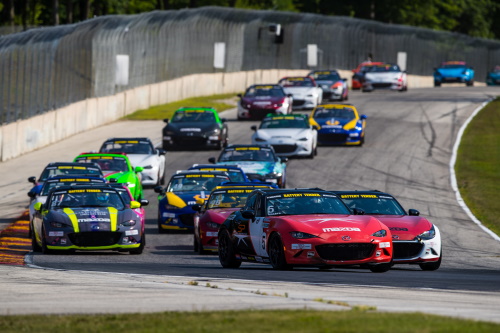 The end of year scholarship payout will follow a season of racing that is set to take place at some of the most iconic tracks on the continent, from Daytona International Speedway to Canadian Tire Motorsports Park to the streets of St. Petersburg.

The year-end prize package isn’t the only support that Mazda provides. In addition to securing the services of Andersen Promotions to manage the series and the support provided by technical partner Flis Performance, Mazda also generates a healthy support package for talented and deserving racers with the annual Mazda Shootout. 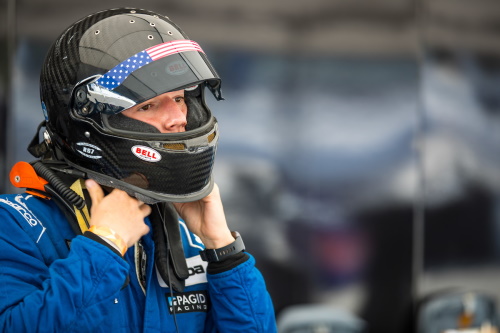 The 2021 season will see American racer Aaron Jeansonne put his $110,000 scholarship to work after winning the Mazda Shootout last month, with Chris Nunes and Savanna Little both having earned $75,000 in support to take part in next year’s Mazda MX-5 Cup following the two-day event held at Michelin Raceway Road Atlanta.

The start of the 2021 Mazda MX-5 Cup season at Daytona International Speedway is only seven weeks away, January 28 – 30. It will be the series’ debut at the famous 3.56-mile roval.

More exciting news about the 2021 Mazda MX-5 Cup season will be announced shortly.

The 2021 MX-5 Cup Championship payouts are as follows: