GAINESVILLE, FL (March 15, 2021) – After two days of battling his Levi, Ray & Shoup Summit Racing Shelby Mustang during qualifying for the 52nd annual NHRA Gatornationals Tim Wilkerson turned the corner on race day. On Friday Wilkerson blasted to the top of the ladder with a stout 3.917 second run at 326.32 mph which positioned him third going into the second day of qualifying. For a team that did not do excessive testing it was a strong statement to the rest of the Funny Car field.

With two sessions and conditions expected to be more similar to race day Wilkerson took the chance to make adjustments to his tune-up yesterday. His second qualifying run did not show the performance improvement he was looking for and in fact his LRS Mustang took a turn for the worse. In the third and final session Wilkerson worked to correct the issue but was unsuccessful and he wrapped up qualifying solidly in the show on the strength of his first run but no additional data for race day.

After conferring with co-crew chief Richard Hartman overnight and again this morning Wilkerson made adjustments he hoped would rectify the issue. Cooler temperatures with the 10 a.m. first round in Top Fuel played into Wilkerson’s hands and his tuning skills manifested themselves with a masterful first round pass. 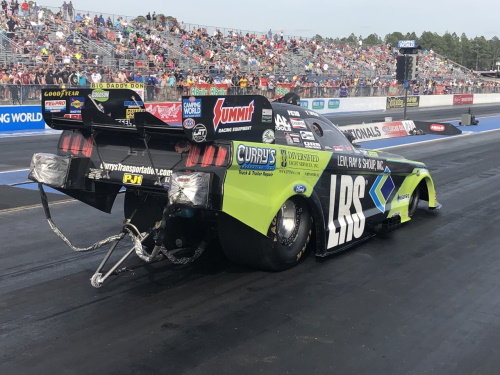 Racing against Dave Richards the LRS Summit Racing Mustang blasted straight down the middle of the groove and lit up the scoreboard with a winning time of 3.963 seconds at 326.08 mph. When Wilkerson looked at the clutch wear back in his pits he was pleased with the outcome and immediately began preparing to face 2018 Funny Car world champion J.R. Todd in the second round.

“That was a good race. We ran close to what we asked it to on that run,” said co-crew chief Richard Hartman, after watching Wilkerson grab the first round win. “We are happy with that run in this LRS Mustang and we are going to get back at it.”

In the quarterfinals the veteran driver and crew chief continued to massage his tune-up as the weather conditions continued to warm up. It was a close race and the Summit Racing Mustang ran strong but Todd, the eventual race winner, was just a little quicker to the finish line. Wilkerson’s 3.977 second run wasn’t enough for Todd’s 3.940 but he did not do any damage to his race car and upon inspection in the pits Wilkerson was pleased with the overall outcome of the weekend.

“We just underestimated it today. Richard and I just talked about the scenarios about why we were in trouble yesterday and why we went down the track today. I wasn’t going to give it away after we smoked the tires yesterday. It is going, which is good. That is our forte. You have to beat us. I am going to find the best number I can run and then I am going to run that over and over so you better be there. Your driver better be there and your race car better be there. J.R. made the second best run of the round. We will keep beating on this tune-up and see if we can make it better.”