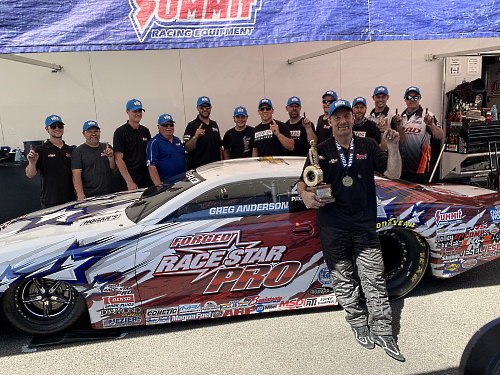 GAINESVILLE, Fla. (March 15, 2021) – Sunday at the 52nd annual Amalie Motor Oil NHRA Gartornationals was the stuff dreams are made of for four-time world champion Greg Anderson, and his powerful Race Star Wheels-branded Chevrolet Camaro played the starring role. After scoring the 107th No. 1 qualifier award of his career with the quickest Pro Stock car on the property at Gainesville Raceway, the veteran drag racer woke up on Sunday, the morning of his 60th birthday, knowing he had a car that could win. He proved with a decisive victory that came with the 95th Pro Stock Wally of his career.

“It’s been a long time since I’ve held one of those trophies, and I’ve said it a million times, you always wonder if you’ll be able to do it again,” admitted Anderson. “I guess you’re not human if you don’t have doubts, and it’s a shame to have those thoughts – but I think it’s good in a way because it drives you to work harder every day. You just want to have that feeling again so bad. To finally get back to the winner’s circle a year and a half later, and to do it on my birthday, well that makes this a win that I’ll never forget.”

Anderson’s route to the final started with a 6.550-second pass at 211.13 mph (top speed of the round) in his defeat of young Cristian Cuadra, who had trouble on the burnout and illuminated the red light. In round two, Anderson handily got the best of Alex Laughlin, launching first with a .023-second reaction time to his opponent’s .062 and then posting low elapsed time and top speed of the round to get the win light, 6.555, 209.98 to a 6.600, 208.49.

The win gets him one step closer to a milestone that many are closely monitoring – yes, Anderson is five away from 100 Pro Stock wins, but he’s also just two wins away from tying Warren Johnson as the most winning driver in the history of the category.

“I definitely want to do that; I can’t say it’s not a goal,” said Anderson, who leaves Gainesville with the points lead. “That isn’t the reason I race, though. I race because this is what I love to do, and I love to win. Whatever that number ends up as, 95 or 105 or whatever it’s going to be, I’m going to be happy. I’m just going to try to get as many as I can.”