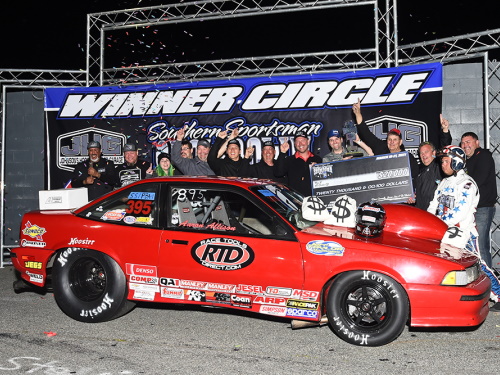 ADEL, Ga. (March 20, 2021) – A full day of racing was contested on Friday at South Georgia Motorsports Park as a generous assortment of Stock and Super Stock racers brought their best to the table. The event on Friday marked the first of three $20,000 races at the inaugural Johnson’s Horsepowered Garage Southern Sportsman Showdown, and it was an enthusiastic battle of muscle and wit. In the end, it all came down to a Stock versus Super Stock final round in which Aaron Allison emerged victorious over Marion Stephenson.

“This race is who’s who of Super Stock,” said Allison, the NHRA Division 3 Super Stock champion in 2016. “You look around, everybody is a world champ or national event winner, so this is really big.”

Indeed, Allison came up against an assortment of tough competitors, starting with Slate Cummings in the first round of Super Stock. But when Allison threw down a .010-second reaction time and Cummings went red by .002, it was all over. In the second round, Allison scored a free pass when Rick Mann broke, but he didn’t get much of a break as he had to race Terry Emmons in round three.

On the other side of the ladder, Marion Stephenson was socking away wins over Jeff Longhany, Marty Bogan Jr., and Pennington in the later rounds to lay the framework for his final-round meeting with Allison. It was simply not Stephenson’s day to win — but he’ll have two more $20,000 events to race in this weekend.

For Allison, the victory triggered a little bit of nostalgia.

“The car was great, it moved less than two-hundredths all day,” Allison said, speaking of his SS/PBA ’90 Chevy Cavalier. “My dad actually built this car brand new in 1989, so we’ve had it this whole time. It’s got a special place in our hearts.

“This is a great race, when they announced it this winter, I said, this is definitely a race I want to go to. A chance to race four times in one weekend for big money at a great track. I’m from Northeast Ohio, so it was quite a trip down here – 900 miles – but the weather is warmer than Ohio, not as warm as I would have liked, but it was a great day. We had a good time, and it’s been.”

Fast, but no trophy
Stock Eliminator No. 1 qualifier Jim Marshall wheeled his H/SA ’77 Chevy Nova to the quarterfinals, but he was .075 at the tree against 2019 NHRA Stock champion Allison Doll and her C/SA Firebird and it cost him; he was forced to push the limits at the finish line and broke out. PB Candies was low qualifier in Super Stock, but a stunning .169-second reaction time was his nemesis, and Ed Longhany emerged from their first-round meeting with the win. 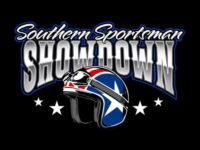 About the Southern Sportsman Showdown
The Johnson’s Horsepowered Garage Southern Sportsman Showdown features Mickey Thompson Performance Tires & Wheels $20,000 to win races on Friday, Saturday, and Sunday, with each day’s runner-up receiving $3,000, semifinalists scoring $1,500, and round money (with second-round win) awards set at $150. Single-day entry for any one of the three days is $325, and entry for the full weekend is $900.

For further information as it is released, follow Facebook.com/SouthernSportsmanShowdown