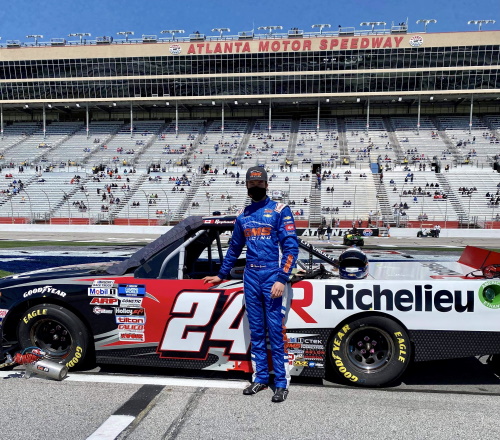 Atlanta, Georgia (March 21, 2021) – Starting from the 23rd position, Raphael Lessard worked his way through the field in the No.24 Richelieu Hardware Silverado, taking care of his tires in order to understand their high rate of wear on this track. Raphael Lessard was up to 11th position without any problem on lap 48 when he felt a vibration. He suspected a flat tire, a critical problem on a track where the cars reach almost 300 km/h. This situation forced him to go to the pits for tires and gas. Raphael Lessard came back on track having lost a few laps on the leader. On lap 115, the young Beauceron tells his team that the car was not running properly at all and he was forced to pit with no possibility to return to the track with six laps to go. The team determined later in the garages that the differential had failed.

The Race From the Driver’s Seat

“The truck was running great early in the race and throughout the first stage. I was able to run on the quicker inside line, something that I could not do in last year’s truck. I was up to 11th place and really thought that I had a flat tire when the vibration started, and I first had to pit for a new set. The team then told me that the old tires were OK, but the vibration was still there and getting worse as the race wore on, and the car would not run at its normal full speed. Then, near the end of the race, I felt a big hit at the rear as the failed differential ended my race with a bang with only a few laps to go.”

“The team is always ready with a good truck, and we are due for a good result. Thanks to Richelieu Hardware for their help and we will see you at Bristol for the dirt race. I’m really looking forward to it,” explained the driver of the No.24 Richelieu Hardware Silverado.

The NCWTS series returns to dirt for the Pinty’s Dirt Truck Race after an absence dating back to 2019, when Canadian Stewart Friesen, a dirt specialist and NCWTS regular, won the race held at Eldora Speedway.

This year, the trucks return to the Bristol Motor Speedway where 23,000 cubic metres of dirt have been added to the normally paved surface. Several leading drivers from other NASCAR disciplines, including several dirt specialists, have decided to try their luck on the at Bristol dirt: Kyle Larson, Kevin Harvick, Kyle Busch, Austin Dillon, Joey Logano, Matt Crafton and Chase Elliott. All of them in a truck and on dirt. This will be a great show!

ABOUT GMS Racing – https://www.gmsracing.net/
Chad Walter takes over as Crew Chief and Tyler Monn will act as Spotter for Raphael Lessard in 2021. Chad Walter has won five (5) races in 208 Xfinity starts as a Crew Chief. He led Tyler Ankrum to a spot in the 2020 playoffs in his first season as an NCWTS crew Chief. Tyler Monn, while still below 30, impressed key staff at Hendrick Motorsports last season. This year, he moves up the ladder as Kyle Larson’s spotter in the Cup Series as well as working with Raphael Lessard in NCWTS and making for an ideal scenario for the young driver’s second year of development.

ABOUT FRL EXPRESS Inc.
F.R.L. Express Inc. is a general transportation company founded in 2004 by François Lessard. Its main field of activity over the last 15 years is general transport in closed trailers over short and long distances in Canada and the United States. FRL currently have about 50 employees in addition to about ten tractors-trailer outfits. FRL owners are proud of the progress made in recent years thanks to the FRL team members and wishes to continue on this positive note. “Our employees, customer service and satisfaction are our priorities. We are all proud to be partners in the success and achievements of our son Raphael Lessard,” state the proud parents.