** RDS and the RDS DIRECT digital service present every NCWTS race on the 2021 schedule. 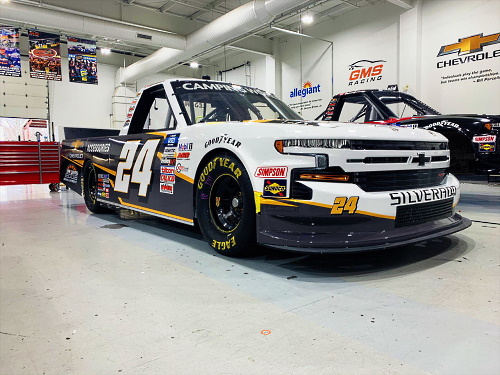 Saint Joseph de Beauce – Quebec, Canada (March 23, 2021) – Raphael Lessard and his #24 GMS Racing Silverado are part of an unusual event this weekend: the “Pinty’s Dirt Truck Race” run on the legendary high banks of the Bristol Motor Speedway oval in Tennessee. The track was covered with 23,000 cubic metres of dirt for the occasion, to create a unique spectacle for two prestigious NASCAR series (NCWTS and Cup).

Driving on dirt is quite different from driving on asphalt, where the track changes gradually over the course of the race with temperature variations and the build-up of oil and tire debris. On dirt, corner entry is usually a big slide to slow the car down. The loose track surface and the quick line changes on every lap, as holes, gullies, and piles of dirt develop on the outside of corners. The track can generate dust on dry dirt or become more slippery after being watered. The ideal trajectory changes throughout the race. All these variables complicate coming up with an effective race strategy.

Preparation for these events began last week as some 1,400 drivers participated in races over this past weekend to get a feel for the track surface as well as help a good portion of the drivers who will race next weekend to discover and become familiar with the track surface. The NCWTS drivers will take part in two practice sessions on Friday and race in one of four qualifying heats on Saturday afternoon to determine the grid for the Saturday night main event. The extra practice and heat races will help drivers familiarize themselves with the track before setting off for 150 laps in an unfamiliar racing surface for many of them. 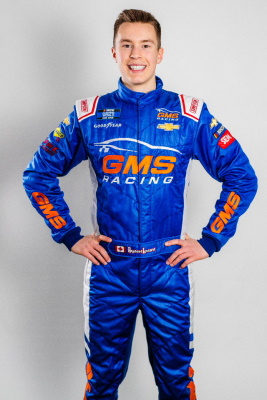 Raphael Lessard has spared no effort to prepare for his first professional race on clay.

“GMS Racing takes this race very seriously. I’ll be driving the dirt-prepped truck that won the last NCWTS race run on dirt at Eldora Speedway (New Weston, Ohio) in 2019 with Stewart Friesen at the wheel. As far as my driving is concerned, we did some dirt testing last month in a “Modified 604” with about 400 hp, quite an introduction to dirt! Then, for the last two weeks, I have been driving a “Micro-Sprint”, a small car that weighs almost nothing and runs very quickly with a 600-cc motorbike engine that spins at 15,000 rpm and surprised me with its performance. At the beginning, we ran with a big spoiler over the driver and then removed it on Monday, to better mimic the low downforce of the trucks on a rather slow track like on the dirt at Bristol. I was able to practice with the Chevrolet drivers like Kyle Larson and Alex Bowman and with other GMS Racing drivers, which was really good for me,” says Raphael Lessard with enthusiasm.

The qualifying procedure promises action, as the accumulation of points over the four heat races will determine the grid positions for the main race. A random draw will start things off by determining grid positions for each heat race, and drivers will accumulate points in two ways:

1. According to their position at the finish of their heat race, and

2. By earning one point for each position gained between their starting and finishing positions.

This method of determining the starting grid gives a fair result based on the performance of each driver and compensates for the bad luck of a driver forced by the draw to start at the back of the grid in his heat race. For example, a driver who starts last and wins a heat race with 10 starters earns 10 points for the win and 9 more for improving his position, for a total of 19 points. He would thus be almost guaranteed to start the main race on the front row or even on the pole.

He learned more advanced driving techniques from these experienced drivers as well as from his Spotter: learning new track quickly without a pre-race test or qualifying session, watching their driving trajectories and test new ones for himself as the track changes over the course of the race, managing downforce and turbulence, overtaking more effectively and protecting your position in the race, adapting to handling defects and adjusting his driving during a run, communicating effectively with the team during a run to describe any problems, managing front/rear braking distribution during a run, managing tire wear to optimize their performance at the end of the race and working in unison with team members during a pit stop.