Toledo, Ohio (March 25, 2021) – Race fans who like to “Break out the Herr’s” will have another reason to add May 22 to their calendar. Herr Foods and the Automobile Racing Club of America have announced the renewal of Herr’s entitlement sponsorship of the ARCA Menards Series race at Toledo Speedway.

The Herr’s Potato Chips 200 will be the fifth race of the 2021 season and the opening round of the ten-race Sioux Chief Showdown, the series-within-the-series that invites the best teams and drivers from the ARCA Menards Series, ARCA Menards Series East and ARCA Menards Series West to battle for nearly a million dollars in race purses, point fund awards, and bonus money.

“We are pleased to continue our relationship with ARCA, and Menards,” said Bob Clark, VP Marketing at Herr Foods. “The partnership with ARCA and Menards has been a win-win for over a decade now, and we look forward to many more opportunities to introduce our products to race fans throughout the country.”

The renewal marks the tenth year that Herr’s has been the entitlement sponsor of an ARCA Menards Series race. The relationship started with current NASCAR Cup Series star Chris Buescher winning at Madison International Speedway on his way to the series championship in 2012, kicking off a three-year run at the Wisconsin half-mile that also saw 15-year-old sensation Kyle Benjamin and Justin Boston score wins. The entitlement then moved to the legendary high-banked half-mile Winchester Speedway in Indiana for two years, with current NASCAR Camping World Truck Series driver Austin Wayne Self winning in 2015 and future NASCAR Cup Series star Chase Briscoe scoring his first career series win on the way to the 2016 series championship. 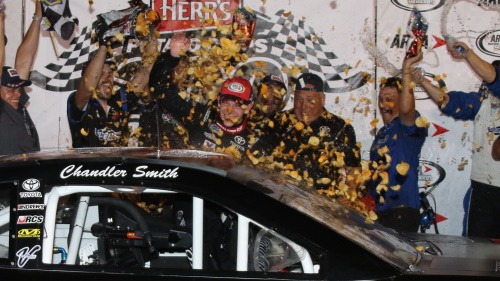 “ARCA race fans really do like to “Break out the Herr’s,” and that’s why this partnership between Menards and Herr’s is such a great fit,” said Menards promotions manager Jeff Abbott. “This relationship is now entering its second decade and we can always count on our friends at Herr’s to liven things up whether it’s in the snack aisle at our stores or in victory lane at the Herr’s Potato Chips 200. We look forward to seeing who will get showered with Herr’s chips in victory lane at Toledo Speedway on May 22.”

Advance discounted tickets will be available at Toledo-area Menards locations for just $20 starting in April. As has been tradition throughout the past decade, fans at the track will have the opportunity to sample their favorite Herr’s Chips flavors at the racetrack throughout pre-race festivities. For event information, please visit ToledoSpeedway.com and ARCARacing.com.