BRASELTON, GA (March 29, 2021) – Franklin Futrelle fought back in a thrilling late-race battle to score his first TA2® victory in Sunday’s Trans Am Series presented by Pirelli race in the Atlanta SpeedTour at Michelin Raceway Road Atlanta.

Futrelle led the opening 25 circuits in the 40-lap, 100-mile event in the No. 58 Innoviv/BH/IGOR/SecurTech Ford Mustang before a determined Sam Mayer went by in the No. 8 M1-SLR/Fields Chevrolet Camaro. Mayer led four laps, but a restart with 10 laps remaining allowed Futrelle to pounce. Trading the advantage while racing through turns 7 through 10, the local driver from nearby Evans, Georgia used his extensive knowledge of the 2.54-mile circuit to his advantage and regained the lead. Despite several challenges by Mayer, Futrelle was able to pull away to win by 1.875-seconds. 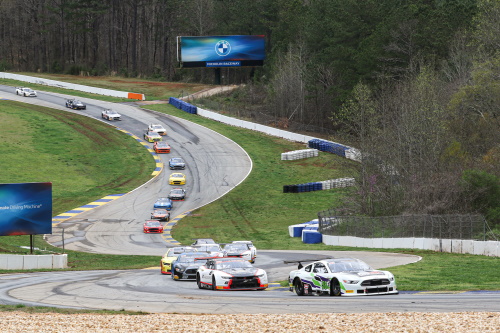 “It is a dream come true, I am speechless, I’ve been waiting for this moment for 15 years,” said Futrelle. “I’ve got my family here, all my friends, I think half of my friends are volunteering on the car this weekend. I have to thank B2 Motorsports, the whole Lagasse family and M1 Race Cars. We are a brand new team and couldn’t do it without their help.”

Futrelle made his TA2® debut last November at Road Atlanta, qualifying an impressive third and going on to finish fifth in the weekend opener. 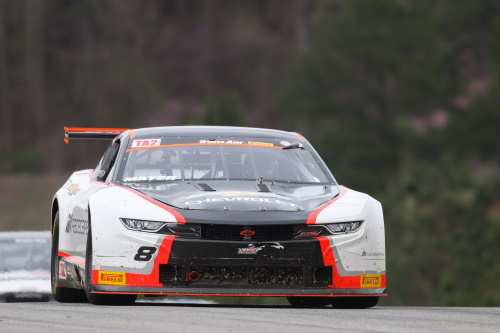 Mayer arrived in Atlanta fresh from his second-place finish and TA2® victory in last weekend’s Trans Am ProAm Challenge at Charlotte Motor Speedway.

“We had a really good battle, but lost the lead early on the initial start,” said Mayer. “We stuck with it, and got the lead after going green following the red flag. I can’t thank Team SLR and M1 Racecars enough, they put a great piece together and I can’t wait to run a couple more Trans Am races with them.”

Thomas Merrill, winner of the 2021 season opener at Sebring, had a ringside seat for the battle for the lead, holding the final podium spot for the entire race in the No. 81 HP Tuners/Mike Cope Racing Cars Ford Mustang.

“We come to win, but I am pleased with a good points day for us,” Merrill said. “We had the best seat in the house. Franklin (Futrelle) and Sam (Mayer) had a great race in front of us. Big congratulations to both of them, especially Franklin, he really deserved it, and that was just an amazing drive.”

The deeply talented field saw several up and comers look to make a big impression against some established veterans, with Connor Mosack taking a career-best fourth in the No. 28 NicTailor/IFS/M1-SLR/Fields Camaro, followed by defending TA2® champion Mike Skeen in the No. 1 Liqui-Moly/Turn 14 Distribution Camaro – winner of both Road Atlanta rounds last season. 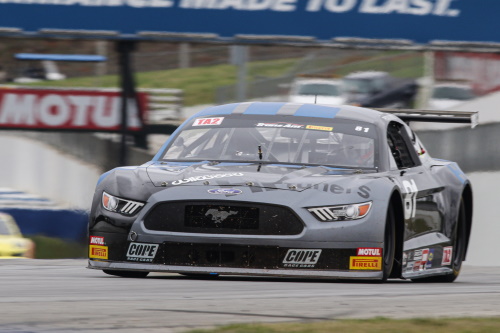 “We thought we were really close in times in practice and qualifying,” explained Skeen. “We thought we would have a pretty good race car, but we kind of struggled all weekend. We fell a little bit behind the eight ball going into qualifying and were surprised a little bit about the pace, we just had false hope going into the race after we won two here last year.

“I had some power steering problems that plagued me the whole race, so that just added a whole other element,” Skeen continued. “It made the car inconsistent and difficult to drive in these conditions. To come away with decent points, in the top five and making up some points on (Rafa) Matos, all that is good stuff, so we will just move onto the next one.”

Scott Lagasse Jr. placed seventh in a brand-new SLR-Fields/M1 Racecars Ford Mustang. It was a solid day for the St. Augustine, Florida-based operation founded by his father. In addition to fielding the Camaros for Mayer and Mosack, the team built and provided technical support for Futrelle’s race-winning Camaro.

Rafa Matos ran a challenging fourth throughout the race until contact with a lapped car caused him to slow with 10 minutes remaining. That incident brought out the second caution of the race, leading to an eighth-place finish for Matos in the No. 883-Dimensional Services Group Ford Mustang. 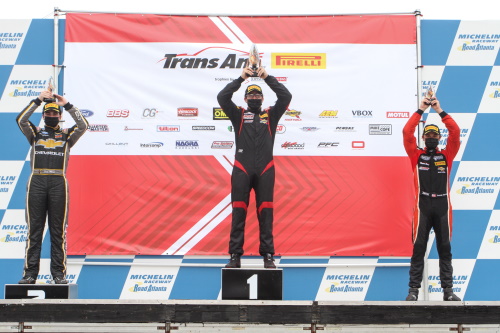 Futrelle was fighting off heavy pressure from Mayer on lap 10 when Michael Self impacted the tire barrier in Turn 1 in the No. 7 Sinclair Oil Camaro. That incident led to a short red-flag period to repair the damage.

Maurice Hull finished 13th in the No. 57 Silver Hare Racing Camaro, earning the top Master’s finish after a battle with Curt Vogt in the No. 23 Cobra Automotive Mustang.

The Trans Am West opens its 2021 campaign at Sonoma Raceway on April 23-25. The National series next visits WeatherTech Raceway Laguna Seca on April 30-May 2.