(March 29, 2021) – 24H SERIES – At this weekend’s Hankook 12H MUGELLO, ST Racing has taken its third consecutive GT4-class podium in the 24H SERIES, results that have vaulted the Canadian team to the top of the series’ GT championship standings. 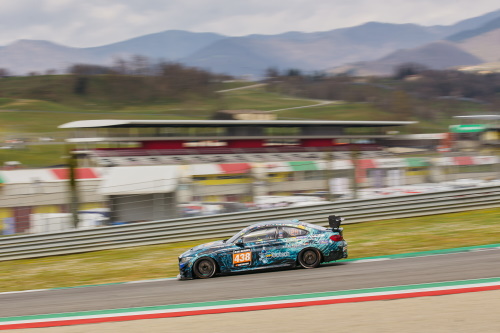 Heading into round three of this year’s 24H SERIES, ST Racing had already secured GT4-class victory at both the Hankook 24H DUBAI and the non-championship Hankook 6H ABU DHABI in the Middle East, and the Canadian team dutifully carried this momentum into its first-ever endurance event in Europe. Aboard the #438 BMW M4 GT4, Jon Miller lapped the Autodromo Internazionale del Mugello in an impressive 1m 59.361s during the 30-minute qualifying session on Friday, securing GT4-class pole position by more than two full seconds!

Poor fortune would strike ST Racing early in Mugello, however. A front left puncture led to an unscheduled pit stop on only the fourth lap, immediately dropping the #438 BMW M4 GT4 more than a minute behind its competitors. Sensational pace from Jon Miller though at one of his favourite circuits in Europe meant that, come the first scheduled driver change, ST Racing had recouped that lost time and even pulled three laps clear of its nearest rival.

Regrettably, another puncture ended Chandler Hull’s scheduled run early, and the true nature of the route cause was only discovered during Samantha Tans’ first stint. Having already pitted with a suspected vibration in the left front wheel – it turned out to be debris and other track-born detritus – the studs holding the BMW’s left rear wheel collapsed altogether as Samantha entered turn one, destroying most of the hub in the process.

Prioritizing the safety of their drivers, ST Racing’s experienced mechanics and engineers set to work repairing the left rear assembly during the event’s overnight ‘hiatus’, as well as other minor irregularities picked up across the opening four hours. The team also dialled the M4’s negative camber to protect the BMW from further punctures over Mugello’s unforgiving kerbs. 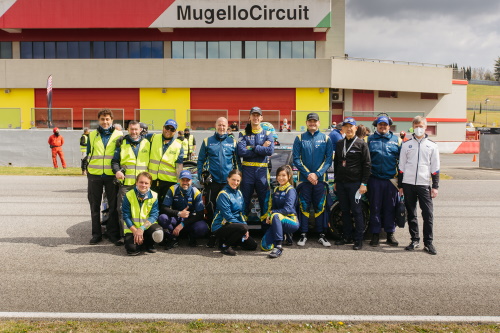 When the race restarted on Saturday morning, ST Racing was 25 laps down, but at the end of a fighting drive, Samantha, Chandler and Jon had pulled back eight of those laps with the now-perfectly setup BMW M4 GT4 en-route to a hard-earned 2nd in-class at the Hankook 12H MUGELLO. Such was the car’s pace across the weekend, ST Racing’s overall fastest race lap – a 1m 59.391 – was only 0.06s slower than the time the car managed in qualifying!

Even with its misfortunes, ST Racing walks away from its first endurance event in Europe with another podium finish under its belt and a five-point lead at the top of the 24H SERIES GT division standings. 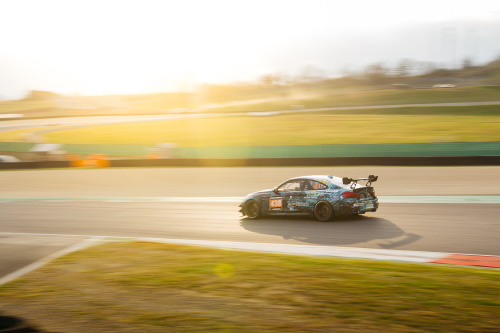 Team principal, Kenneth Tan: “It was a good result, but not totally satisfying because we were unable to prepare the car for the race the way we would have wanted to. COVID-19 restrictions created very challenging circumstances, and we did not know if our mechanics from Canada would be allowed into The Netherlands to work on our car. Fortunately, with extremely helpful assistance from CREVENTIC, the 24H Series event organizers, we were able to overcome that challenge, but that was only one of many issues we faced this weekend. At least now we know what we need to do to make sure the car is properly prepared for our next race at Paul Ricard.”

Driver, Samantha Tan: “We definitely had the pace but no luck this weekend. Jon started the race from pole but had a puncture right at the start, which immediately dropped us behind. It’s a credit to Jon’s determination that, by the end of his stint, we were back in front with a three-lap lead. Chandler ran fast, consistent laps during his stint but also had a front left puncture before handing the car over to me. Unfortunately, about an hour into my run, the left rear studs sheared at turn one, so we had to stop with only 30 minutes to go on Friday. The team worked all through the night to get the BMW ready for Saturday’s restart, and I can’t tell you how proud and grateful I am for all of their efforts. The car felt great for the final eight hours, Chandler and Jon drove perfectly on Saturday, and I even posted my fastest laps of the weekend when I jumped in to bring the car home to the chequered flag. I even gave our GT4 Porsche competitor a wave as I passed him in Turn 12! We still ended up on the podium and we’re in lead for the championship now, so altogether it has been a solid weekend!” 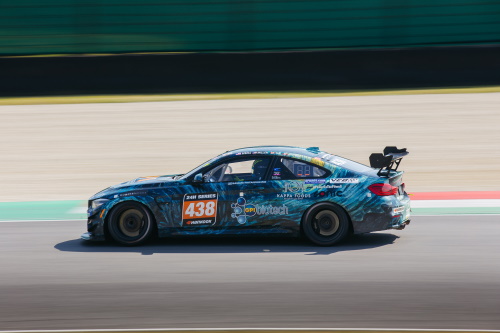 Driver, Jon Miller: “It’s easy to look at the result from Mugello and be disappointed that we didn’t convert our speed into a race win. However, the bigger picture is a pretty one! We learned some valuable things that will make us stronger for the rest of the championship, which we are now leading. Samantha and Chandler both drove strong double stints and adapted quickly to changes we made to protect the car from further punctures. It’s pretty special to be in Italy, racing at Mugello at a time when travel restrictions make the logistics more complex than ever, so I really want to thank GPI Biotech, Kappa Foods, CREVENTIC and the track staff at Mugello who made the race possible. Plus, Bas Koeten Racing who have been great partners on the ground for us so far this season.”

Driver, Chandler Hull: “Mugello ended up bittersweet for the team. We had a very strong car that showed unbelievable pace during practice and qualifying, but tyre problems and another mechanical issue meant we were knocked out of contention within the first four hours. I have to give it to ST Racing though, they didn’t give up and had the car repaired and ready to go the following morning. Again, we showed great pace, making up quite a few laps but in the end it wasn’t quite enough. Overall though, being back with the ST Racing crew was great and the track is amazing. I’m really looking forward to Paul Ricard next month, another track I’ve never been to, and we’ll all be looking for redemption.”

The next round of the 24H SERIES, hosted by Dutch promoter CREVENTIC, takes ST Racing to Circuit Paul Ricard in France on 23-24 April for the Hankook 12H CIRCUIT PAUL RICARD. Closer to home, and just one week later, ST Racing continues its GT4 America Series campaign at the Circuit of the Americas across the 30 April – 2 May weekend with its two-car BMW M4 line-up for Ryan Eversley and Joe Rubbo, and Tomas Mejia and Bryson Lew.

ST Racing will take part in all events of the 2021 24H SERIES season.