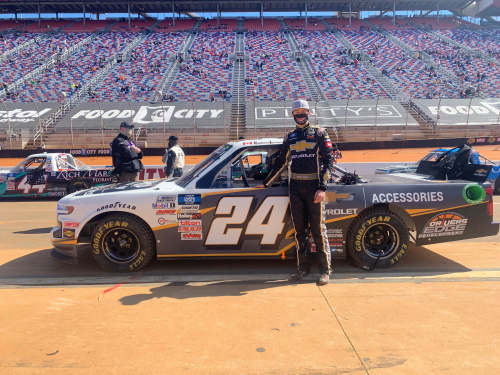 Bristol, TN (March 30, 2021) – Raphael Lessard put on quite a show in his first race on dirt today. The fifth round of the NCWTS Truck Series was run on the Bristol Motor Speedway oval which was covered with dirt just for the Pinty’s Dirt Track Race. This race was highly anticipated by everyone, especially as rain forced NASCAR to postpone the event from Saturday to Sunday, then on to Monday. The field was unable to qualify on Saturday due to the weather, and Raphael Lessard started in 29th place as per NASCAR’s calculation based on the team’s results. From the first to the last lap, Raphael Lessard kept on overtaking his opponents, until placing his #24 GMS Racing Chevrolet Silverado on the podium at the finish.

After setting the fastest time in the first practice session on Friday (March 25), Raphael Lessard and his #24 GMS Racing Chevrolet Silverado set the 16th fastest time in the final practice session, on a track close to what the race would be run on. This was a promising lap time for a driver with no experience on this surface where the driving and suspension settings are totally different from those on asphalt in order to react effectively to the changing surface of the dirt track on every lap.

Starting from 29th on the grid for the Monday race, as per NASCAR’s calculations based on the team’s results, Raphael Lessard began his irrepressible march to the front of the race, marked by his 15th place on his first pit stop on lap 40 and by his 8th place on his second pit stop on lap 90. He then finished on the podium by tenaciously defending his third place which he had reached on lap 123 of the 150-lap event.

The GMS Racing team knew how to prepare an exceptional truck for Raphael Lessard, the same truck that had won on the dirt in 2019 in the hands of Stewart Friesen. The team gave their driver a truck with proven potential, and the driver made the team proud. 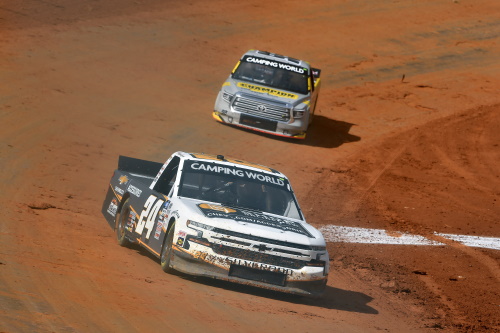 The race as seen by the driver (extracts)

“Third place and a first podium this year, I am happy. I was already feeling good with the quickest and then 16th time in Friday’s two practice sessions with good dirt racers around me, like Kyle Larson and Chase Briscoe. I started the race from way back, but the quick drivers around me also wanted to move up to the front. I had to follow them, which I did in the race until they were eliminated, or I passed them.

“After the second stop, with the engine now healthy and with reasonable handling on the increasingly slippery track, we were in a good position to keep attacking. I worked with different lines and braking distribution to reduce the load on the right front tire so we didn’t lose too much time in the last few laps. I managed to overtake other good drivers as I moved up to the leaders. The truck was losing grip in the corners and I worked hard to protect my position until the end of the race,” explained the driver of the #24 GMS Racing Chevrolet Silverado who was delighted with his stellar performance.

The NCWTS returns to normalcy for their next event, which will take place on the 0.75-mile oval of Richmond International Raceway (Virginia, United States). 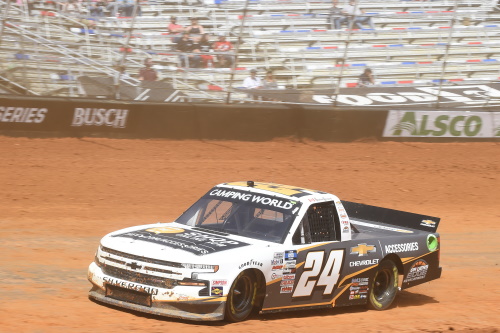